Posted October 26th 2016 at 11:13 am by Nse Umoh Esema
in Immigration and Migration, Perspectives on Current Events 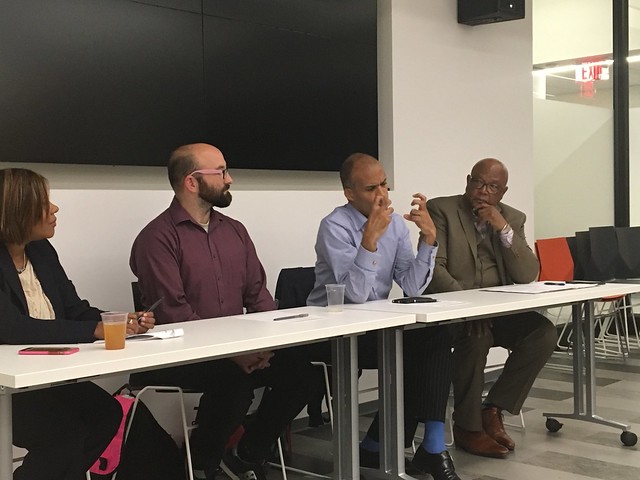 The panelists were Natalicia Tracy, a sociologist and immigrant rights organizer, who leads the Brazilian Workers Center; Carl Williams, an ACLU attorney who uses constitutional structures to challenge state power and quell state violence; and Jason Lydon, a Unitarian Universalist minister and founder of Black & Pink which works to abolish the prison industrial complex while providing immediate services to LGBTQ prisoners and helping anyone who is HIV positive, regardless of sexuality, in prison.

Below are 6 of the points they shared about what they think urban planners need to understand about state-sponsored violence.

About three years ago, the ACLU represented a woman who was beaten by the police in Roxbury in front of over 150 people for trying to call the police on the police. This happened before the national outcries against the murder of young people like Tamir Rice and Mike Brown. Part of the ACLU’s goal in this case was to secure a legal precedent that the police’s actions were illegal.

A year ago, another police officer beat a woman; he pepper sprayed her and took out a 9mm pistol because she allegedly stole a bar of soap. Because there has been more activism and organizing, people knew what to do. Eleven people took out their phone cameras, began recording, and saying, “you should put your gun away, you should be ashamed of what you’re doing.” The officer eventually acquiesced and put his gun away. This, Carl argues, is community precedent disrupting state-sponsored violence. “They cannot keep doing what they are doing if we refuse to cooperate,” he argues.

2. The immigration detention system works in conjunction with the police; so attempts to dismantle one, must consider the other.

Natalicia Tracy explained that the collusion between the police and immigration and customs enforcement (ICE) traces back to the late 1980s creation of the Criminal Alien Program. This collusion has led to the increased criminalization, detention and deportation of immigrants. She explained how simple encounters, like being stopped for an alleged traffic violation, which undocumented individuals have with the police, often escalate unnecessarily. “If you drive without a license, you could be subject to detention and deportation,” she explained.

3. Prisons are a critical, yet often forgotten space to focus on when working to eliminate sexual violence in communities.

Carl Williams noted that, “the majority of incidences of sexual violence happen behind bars.” Yet, when we talk about stopping sexualized violence in this country, influenced by hetero-normativity, white supremacy and classism, very few people, Carl notes, imagine this happening in prisons.

4. Holding the political vision of prison abolition means pushing back when urban planning frameworks are used to support imprisonment.

There are efforts underway in Massachusetts’ Middlesex County, where Cambridge is located, to bring back an urban jail.

Jason Lydon shared that, “very progressive minded folks argue that we need the jail to be closer to the city because folks cannot get out of the city to visit their people.” Part of the logic of advocates is that, “good city planning practice would be to have the jail—which begins with the idea that we should have jails—built in the city because the people being locked up are disproportionately Black and Brown, and live in urban areas,” Lydon continues.

5. HIV transmission and incarceration overlap spatially in ways that urban planners can intervene in.

Jason Lydon noted, “If you look at where HIV transmission is happening in the city of Boston,” Lydon argues, “you see North Dorchester being the place where it is the highest. If you lay on a map onto that, you will also see that is the exact same community having the largest theft of people by the prison system. HIV transmission is an urban planning issue in the sense that when we are removing sexual partners from Black communities and placing them in prison, the community viral load of HIV increases because there is a decrease in the potential number of people to have sex with.”

So, instead of supporting the building of prisons that steal people away, Lydon’s charge to planners is this: “how might you create health centers offering equitable, just healthcare that will not only be pat of reducing incarceration but help to create something that the community needs right now and is a health justice struggle?”

6. Dismantling the privatization of detention centers is relevant to urban planners working to undo the ravages of neoliberalism.

Natalicia Tracy pointed out that the growing rates of detention and deportation in immigrant communities is connected to the fact that “private companies are making a lot of money on putting people away, and on things like food and clothing for [people being detained].” The government has contracted out for 34,000 beds in detention centers to be filled everyday. “This creates,” Tracy asserts, “an incentive for going out and basically arresting and detaining people.”

Planners concerned with the implications of the process of neoliberalization, whereby private interests control social life in order to maximize profits, must pay attention to this. As urban planning Professor Sheryl-Ann Simpson recently wrote that, “these agreements are not about justice – not even revenge- or punitive-based justice – and certainly not about rehabilitation or restoration. They are about profit and capital.”

These six lessons from Monday night’s panelists assert that state-sponsored violence is connected to race, space, gender & sexuality, health and the economy. These are topics that urban planning practitioners ought to be deeply concerned with and eager to act on.

This event was the first in a 2-part series exploring state-sponsored violence. If you are in the Cambridge area, join MIT CoLab for the second event, a screening and discussion of Fruitvale Station on Thursday October 27th.