I am obsessed with adrienne maree brown right now (ha, in hindsight, I get obsessed with a lot of things). Not because I think she is perfect, but because of how she directs energy and attention (her own attention and the attentions of those around her) and to whom. In her work she is constantly, consistently pointing to her sources, her inspiration. In that fashion, this is a pointer back to her. Here’s to adaptation, experimentation, and iteration! 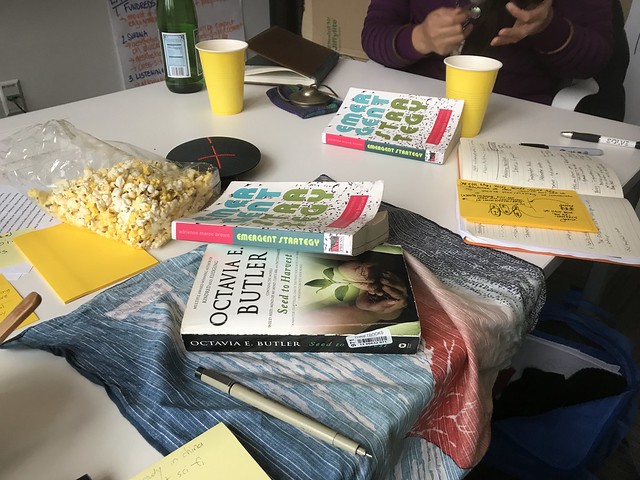 On November 16th, from 12-2p, Grant Williams and I hosted a version of adrienne’s detroit sci-fi generator. The purpose of this post is to provide (from my perspective) a recap of what happened, provide some handrails in case anyone else wants to iterate on this, and share a few lessons (and some extra delectable content).

Note: this post is built on an underlying assumption that the future, if it is to work for all of us, must be collaboratively imagined and constructed. I hold this assumption for many reasons, but Pedagogy of the Oppressed has the clearest explanation I’ve found to date.

“The future is not something to be predicted, but to be made.” — Nick Montfort, The Future

We need to move from competitive ideation, trying to push our individual ideas, to collect ideation, collaborative ideation. It isn’t about having the number one best idea, but having ideas that come from,and work for, more people. — adrienne maree brown, emergent strategy: shaping change, changing worlds

If the future is to work for all of us, I believe we must all have some part in shaping it. And yet, for all our efforts (well-intentioned, mal-intentioned, and everything in between), we actually do not yet have muscles to design our world collaboratively. Some of us, myself included, have been trained to believe it is our responsibility to imagine and the design the world for everyone else. Pedagogically speaking, not only will this not work, it’s inherently coercive and oppressive. So when I learned about adrienne maree brown’s collaborative sci-fi workshops, the detroit sci-fi generator, I was floored (prefigurative politics). She said about the workshops:

“i’ve been a lover of science and speculative fiction for as long as i can remember. in the past few years i have been growing more and more interested in how these genres can be used to strengthen the radical imagination muscle we need to move our society beyond fear-based survival.”

There is enough depth contained in those two sentences to keep me writing for hours, but I’ll spare you (for now…) and keep it to the experiment.

Grant and I resonate deeply with adrienne’s curiosity: How might creating sci-fi help us “strengthen the radical imagination muscle we need to move our society beyond fear-based survival”? As people with city planning degrees, we are deeply concerned with the (past, present, and) future of the places and spaces that we live, work, and play. How does our capacity to imagine impact our planning work? Who knows, but we’re working to find out! We suspect that stronger imagination muscles and stronger collaborative imagination practices (among other things like shifts in culture and power) will lead to a better world/better worlds.

But how do you build radical imagination muscles? Enter the detroit sci-fi generator.

I think I learned about the detroit sci-fi generator in Octavia’s Brood. I had to try it out! I messaged adrienne on Facebook and she said to go for it. I shared it with Grant and we agreed that we would test it out. From there, we brainstormed a list of people we thought would be up for joining in on the experiment. I used some scheduling tool (probably Doodle) to pick a good time and then drafted an agenda based on a post from the detroit sci-fi generator website. 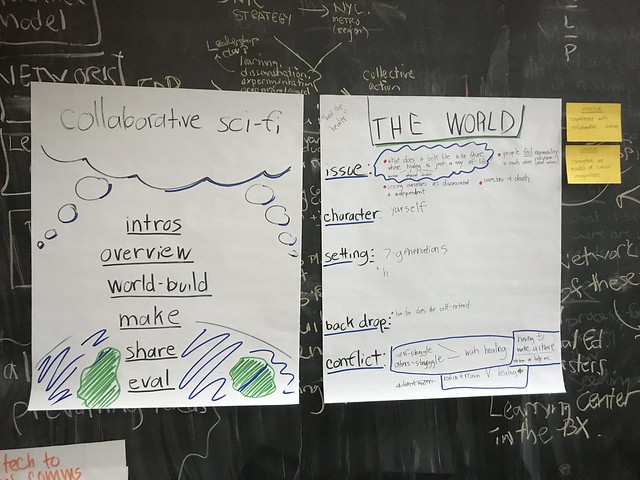 Photo of the agenda and world we collaboratively built.

Some notes on what happened:

I imagine that even more lessons will make themselves known over time, but for now my takeaways from this experiment are:

That reminds me, I should circle back to the other participants and see what their takeaways were. I know at least one participant discovered they could do something they didn’t know they could..

This experiment was an excellent learning opportunity and the lessons learned here will continue forward in the thinking, future-making, and experimentation of the Alternative Futures Collective. Feel free to check out these and other stories on the Unleashing Alternative Futures website.