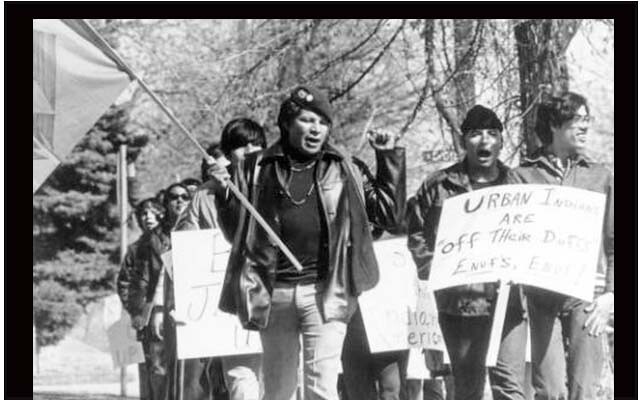 I grew up watching my grandmother and her friends organize the Native American community in Denver. They organized fundraisers for scholarships and families going through hardships and built a community center for powwows. Little did I know, they were also organizing a movement.

Community service was never really anything we discussed; it was just a way of life. I was brought up with the belief that you help others because, by doing so, you are helping your own community.

That is what has inspired me to make a documentary on The Native American Civil Rights Movement and the work of my grandmother’s generation. It is important to our communities to capture these stories before our elders pass on and we lose these stories forever.

Native Americans are often seen as a part of the past: a stereotype associated with racist team mascots and Western films. Rarely are we a major voice in the American cultural melting pot. Our history has been whitewashed in textbooks, and our voices often lost in the narrative of American history, especially when it comes to our civil rights movement.

Activism and community service are huge parts of being Native American, and that’s why this film is so important to me and to our communities. By sharing the story of the activists who empowered Indian Country and fought for hiring preferences at the Bureau of Indian Affairs, we empower our future generations. These are stories that risk being lost as our elders pass on. They are stories I never knew despite being raised in the Denver Indian community, surrounded by the activists who lived them.

In 2015, I started researching the background of the landmark decision in Freeman V. Morton, the 1974 case, in which the U.S. Supreme Court ruled in favor of Indian Hiring Preferences. This decision was hard fought. It began when twelve Indian employees, five of whom were women, at the Bureau of Indians Affairs’ Plant Management Engineering Center in Littleton, Colorado filed a formal complaint against the Bureau. Their grievances included discriminatory practices in training, hiring and promotions, and the misuse of government funds meant for Indians. This movement would spark protests across the country as activists would go on to peacefully occupy BIA offices throughout the US with dozens being arrested, stopping only after the case went on to the Supreme Court in 1974.

I grew up around a number of the Native American women activists in the photos and articles reporting on these protests. But until I began my research, I never really knew how much they changed the course of Native American history. It is through their organizing that our communities now have hiring preference at the very government agency designed to represent us.

In understanding the pivotal role that Freeman v Morton and the activism leading up to it, played in the Native American Civil Rights Movement, I’ve realized how big an impact being raised around strong engaged women has had on my own life.

Over the years I have been involved in multiple direct actions, including sit-ins and protests at the Texas Capital for Lesbian, Gay, Bisexual,Transgender, Queer, Intersex and Asexual (LGBTQIA) rights. I have spent many years researching the impact of non-violent civil disobedience on various civil rights movements; but I never knew that I had been raised by some of the greatest resources anyone could ever ask for. Just the other day, my grandma told me that the “ I am somebody” chants I’ve shouted at protests is the same chant she used when she was organizing with the Poor People’s Campaign nearly half a century ago.
There are many things I inherited from my Assiniboine and Sioux heritage: long, straight hair, almond shaped eyes, and the ability to fancy-dance to the beat of drums in the northern Montana plains. However, alongside the sacred, rare traits that I share with generations that came before me, come historical traumas and cultural genocide.

Until I began the research for this documentary, I don’t think I really took the time to appreciate that so many of the moments that ended up being powerful steps in my life, and that have shaped my character and the character of my daughters, came from watching the strong Native American activists who surrounded my life growing up.

Post by Jennifer K Falcon. Jennifer is currently running a Kickstarter campaign to raise funds to develop the trailer for her documentary. Learn more here.