Posted October 15th 2014 at 9:46 am by Mitchell Cook
in Financing Resilient Development 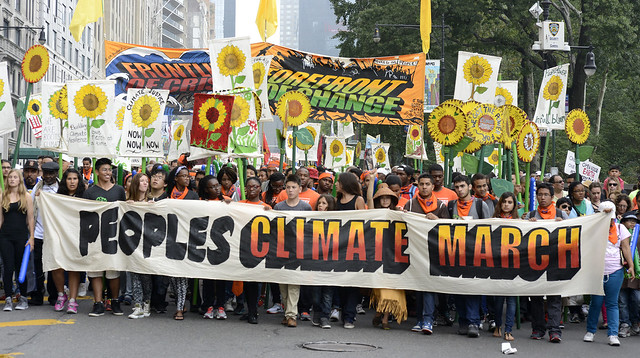 Following the recent climate summit at the United Nations and the People’s Climate March, and as new evidence suggests the planet’s atmosphere is warming faster than previously estimated, the conversation on what to do about global warming is taking on a new level of urgency. Absent radical reductions in global green house gas (GHG) emissions, the negative effects of climate change that are already being experienced are likely to worsen over the coming years. Though urban climate adaptation has many dimensions, according to the IPCC, it can be understood as “adjustments in natural or human systems in response to actual or expected climatic stimuli or their effects, which moderates harm or exploits beneficial opportunities.” Throughout history societies have managed to adapt to incremental changes to climatic conditions; in the process building up adaptive capacity. Contemporary climate change is different. It entails considerable threats to the livelihoods of residents of metropolitan areas vulnerable to wide swings in the frequency and magnitude of extreme weather events that go beyond existing levels of adaptive capacity. This series of blog posts sets out to highlight one element of urban adaptation that has yet to receive much attention: the governance system responsible for financing collective action at the local level.

The metropolitan finance system consists of the actors and institutions responsible for decisions regarding tax revenues and public expenditures at the local level, including financial transfers from higher levels of government and public private partnerships (PPP). The potential of PPPs to deliver adaptation options has recently gained prominence in the urban adaptation discourse. Yet, beyond the capacity of public finance to “crowd in” private investment, there are key underlying concepts of municipal finance systems that have to be untangled in the collective conversation on climate change. For example, what type of good is urban adaptation? Should populations beyond those that benefit directly from adaptation investments be forced to contribute to cover adaptation costs? Can improvements in taxation lead to greater accountability and responsiveness in the policy setting around urban climate adaptation?

The IPCC recently addressed the nature of climate adaptation in its Fifth Assessment Report and found that different types of adaptation fall along different points in the continuum of public and private goods. For instance, they listed direct capital investments in public infrastructure, technology development, creation and dissemination of information, and human capital enhancement as adaptation options with public goods characteristics. Forms of climate adaptation with private goods characteristics included those affecting patterns of enterprise management, facility investment, and resource use. This type of categorization of urban climate adaptation is important because the categorization of a good determines who pays for it and how.

Unlike the mitigation of green house gas (GHG) emissions, the benefits of urban climate adaptation are restricted geographically to the jurisdiction doing the adapting. Principles of public finance state that when benefits of public spending are restricted to a limited geographic area, only the beneficiaries of the services should pay for them and should only receive the benefits they pay for. Public finance economists refer to this as the benefit principle. Climate change upends the benefit principle; it is populations that are most vulnerable to climate change — children, the elderly, and the poor — who are often the least capable of paying for the expansion of public goods through taxes. Under the benefit principle, adaptation to climate change holds the potential to exacerbate the existing spatial pattern of inequality in the distribution of public goods as those neighborhoods that can afford adaptation measures get them while those neighborhoods that cannot do not.

An alternate framework would be to consider urban climate adaptation as a merit good. Merit goods are those which have some private characteristics and some public characteristics but which for ethical reasons should be made available to all irrespective of ability to pay. For instance, some forms of health care and education have long been considered merit goods. Merit goods entail value judgments about what types of public programs and investments are socially beneficial to the society at large. The merit goods formulation perhaps better approximates the reality of adaptation to climate change in cities. Climate change impacts will be felt unevenly, with the poor and marginalized members of society forced to bear the costs of a crisis to which they barely contributed. The merit goods case for urban adaptation to climate change does not stipulate a particular approach to adaptation policy but it does, however, argue that the state has an obligation to provide adaptation-related services on the premise that all are entitled to protection from adverse climate impacts no matter their residential location.