A Soundwalk in Santa Ana California 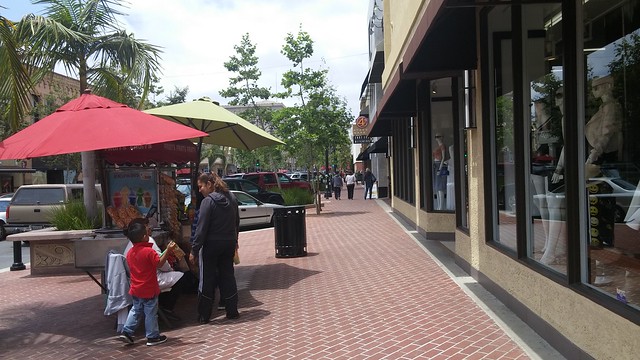 One Saturday afternoon, I walked up and down 4th Street in downtown Santa Ana between Bush Street and Spurgeon Street six times. It wasn’t until my fourth trip that the three bearded cyclists sitting at one of the aluminum tables outside of the 4th Street Market and a female Latino street vendor selling duros noticed I was pacing back and forth. Each time I began my new journey down the street I pressed “start” on my recorder.

The first sounds I heard came from the line of cars slowly moving down 4th Street. The cars were waiting for pedestrians to cross and the light to turn green. As they stood still, I could hear a few stereos blaring upbeat Spanish radio. Walking a little further down the street I heard a man loudly preaching in English. I thought his language choice strange in an area where many people’s native tongue is Spanish. As I walked towards his voice he eventually came into view: an older gentleman with white hair and a jean button up shirt standing on a box-turned pulpit and reading from a booklet. I stood near him and waited to see how people were reacting to him. At one point two men and a woman stopped directly in front of him and began speaking in Spanish, as if he was invisible. Perhaps he took that as a divine sign to change course. As I walked away he began to homilize in Spanish. 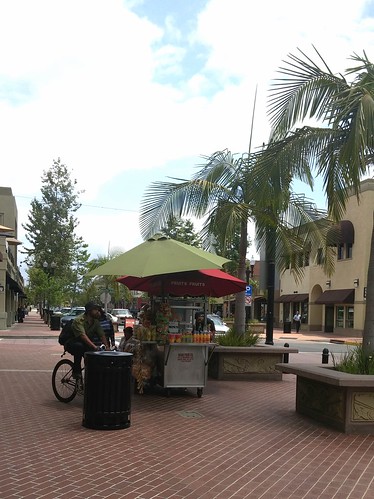 Listening closely to the sounds of 4th Street, I’m reminded that Santa Ana, especially 4th Street between Bush and Spurgeon, is a fascinating place to be right now. The stark contrast between two cultures is readily apparent. You can see it, hear it and smell it. The 4th Street Market is the new “culinary hub” in town and is drawing a whole new “hip” crowd to the area. It is the newest addition to the redevelopment of the East End, which was known for many years as the Fiesta Marketplace, a shopping center for Orange County’s Latino community. I am amazed that a soundscape recorded in 2 minutes actually communicates that there are two cultures present, dueling it out and trying to thrive in the same place.

This soundscape adds an important layer for understanding Santa Ana’s complicated past, present and future. To learn more, see this article: Trendy Crowding Out Traditional in Santa Ana.

This is one of many posts where CoLab Radio contributors take readers and listeners on a soundwalk in their city. Read and listen to yesterday’s sound walk from Accra, Ghana here. If you’d like to submit an example from your own city, see the easy steps here.