Posted June 23rd 2014 at 2:41 pm by Sofia Campos
in Perspectives on Current Events

A Youth-Led Gap on the Side of American Politics 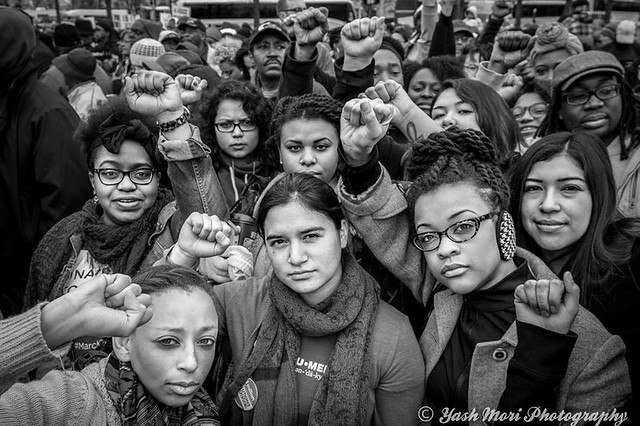 With a world record of over 2 million deportations, from the current administration alone, and over 25% of our communities incarcerated, there is too much pain and too much at stake to continue the way things are. As the gap between the rich and the rest grows, wealthy and large corporations flood money into local U.S. politics to influence election outcomes and push legislation that puts their short-term profits over people and the environment. This, in addition to massive dissatisfaction with the two political parties poses a great challenge to reaching a new political majority and participative democracy in the U.S. All young people do not vote– due to lack of eligibility, access, motivation, or desire– but many engage in the political processes of this country through formal and informal channels. For some, not voting is a form of political participation–one which sends the message that choosing between the lesser of two evils, or two parties, is disempowering and not worthy of participation. There exists an unmet desire for alternative ways of thinking about and solving our country’s problems, especially among youth.

Young people have historically played critical roles in the push to change society for the better, and we continue to do so. In 1964, Freedom Summer became a turning point in U.S. history because young organizers put the struggle for democracy at the heart of the struggle for Black Freedom. This year marks the 50th anniversary of that pivotal event and we, young organizers of color on the Freedom Side, believe the best way to commemorate Freedom Summer is to reinvent it and take back the democratic process for our generation.

We are launching Freedom Summer 2014 as a manifestation of collaborative efforts between those living and organizing in society’s gaps. Often dismissed as inexperienced, uneducated, and immature, we constantly experience systemic and relational exclusion due to our age, race, citizenship status, class, gender, and/or sexuality. Living in these gaps better equips us to build transformative culture, analysis, and vision that permeates existing categories, institutions, and borders.

From our places in the gaps, we possess various identities and experiences that shape our individual selves, which make up our larger communities and cultures. Many of us practice intentional analysis around these intersectionalities in our organizing work. For instance, within United We Dream (UWD) exists the Queer Undocumented Immigrant Project (QUIP) amplifying stories of undocuqueers as told and experienced by those who hold both undocumented and queer identities. Black Youth Project (BYP) 100 intentionally carries out black and queer focused work, and the Black Alliance for Just Immigration (BAJI) brings to light connections between racial and immigrant [in]justice.

Freedom Summer 2014 is grounded in the reality that we don’t live single-issue lives (as Audre Lorde taught). Freedom Summer aims to reclaim the pride, celebration, and complexity of our full lives. We hope to build acknowledgement, respect, and love for all lives, no matter their form; where all are acknowledged as different and part of a whole, and ignorance and invisibility is no longer commonplace. We aim to develop spaces and processes that bring visibility to existing, local grassroots organizing efforts and provide platforms for exchanging local knowledge and experiences. And we seek to uplift individual and community healing, movement sustainability, and collective leadership by implementing practices that will embed these values into our community organizing.

Through convenings, planning meetings, and conference calls for Freedom Summer 2014, we have asked each other to consider and redefine terms like “political independent power”, “Vote” and “Civic Engagement.” This summer, the Dream Defenders will lead “Civic Enragement” efforts throughout Florida where they’ll register potential voters, while learning about the issues and experiences deeply affecting community members. United We Dream will highlight undocumented youth political power within Freedom Summer 2014 through the “I am a Dream Voter” campaign in San Antonio, Texas. Though undocumented people cannot directly vote, we exercise political influence through get out the vote efforts, storytelling, direct actions, and more. The Ohio Student Association and Better Schools, Better Jobs Inc. in Mississippi are also implementing transformative, grassroots organizing this summer to impact statewide policies around democracy and education.

Young activists who pushed their generations towards social transformation have traditionally come from society’s gaps. The Student Nonviolent Coordinating Committee (SNCC) is only one example of how youth resist longstanding obstacles to change and inject renewed energy into society. With guidance from the spirits of social justice activists like Ella Baker, Bayard Rustin, Larry Itliong, Fannie Lou Hammer, and others we as young organizers of color seek transformational change for the sake of our present and future. We will not work within inherited issue silos, nor will we allow the opposition to divide and conquer our communities anymore. Freedom Summer 2014 is part of a larger, developing vision for political and social change towards a Beloved community, which we are all responsible for. With our eyes on the prize, we can transform the status quo.

This week, we’ll be at the Freedom50 Conference in Tougaloo College in Jackson, MS. If you will be joining, look for us there! Otherwise follow us on FB and TW: @FreedomSide and get involved with Freedom Summer 2014 at www.freedomside.org.