“Affirmative Art” offered in communities across the U.S.

What is your true desire for your life, and for your community? When was the last chance you had to think about this? So often, the structures we operate within muffle our dreams.

Affirmative Art is a process in which people can express their deepest desires. The Affirmative Art Tour is a cross-country journey in which a team of three artists is hosting workshops in local communities to empower individual dreams, and collect them as a constellation of visions of purposeful lives.

We started our journey on May 6th by outfitting the Dream Machine – a 2004 Ford Econoline van. We’ll be driving across the United States in this van over 21 days , and chronicling that journey on CoLab Radio.

Affirmative Art began in Kenya. Eirik Tronsden had been working in Uganda, Somalia, and Kenya for over a decade with NGOs in a variety of rescue and infrastructure building capacities. After years of helping to provide what he and the organizations he worked for thought people needed, he began to realize that he didn’t know what people wanted. No one asked them. He began to wonder: How much ownership do these communities feel over their built projects? Were they what they even needed? Eirik began to ask of anyone who would draw: What is your dream? Draw to identify your purpose in life. Think big, because this is your life, and you may not have clean water now, but you can still reach for the moon.

Last fall Eirik went to MIT as a SPURS Fellow, and to his surprise, people there also acted blindly, and didn’t always examine why they had reached the stars they grasped. Affirmative Art – a cheap, simple tool that anyone can use – was also relevant at MIT. Listening to your true desires, without the static of others’ expectations, is rarely easy, especially for those of us who are older. In our Washington D.C. workshop, one young visionary said he wants his dreams to “spread to others like a supernova.”
Eirick’s experiences at MIT inspired him to think about taking Affirmative Art on the road with Marcus Christensen – a web designer, young entrepreneur, and son of his good friend from Norway. While at MIT, Eirik met me – a public artist, urbanist, professional architect, and fellow MIT alum – and the three of us decided to plan this tour.

We’re seeing the U.S. through the focused, deep lens of community-centered places, not traditional sightseeing. The reverse of the relatively superficial tourist experience has been sharing real conversations with people who nurture community.

During the workshops, we encourage participants to engage in the level that is comfortable to them: they can write and draw, present to the group, and pose for a dream portrait to be collected online as part of a growing community of people who have shared in the Affirmative Art experience.

On May 6th, we began to paint our van outside the wind-tunnel testing building at MIT. I zigzagged the white tape across the sides to block off triangular spaces for painting, while Eirik outlined the word “Affirmative” in his unique style on the hood. Friends began to paint without instructions. They drew well wishes (Do not feel lonely) and symbols of personal values (a crossed-out gun from a Pakistani friend who prefers overcast days to sunny ones since drones can’t be operated through the dense gray). Marcus explained the concept of Affirmative Art to Brielle from the MIT Alumni Association, who plans to compile our amateur videos from the trip into a visual story. 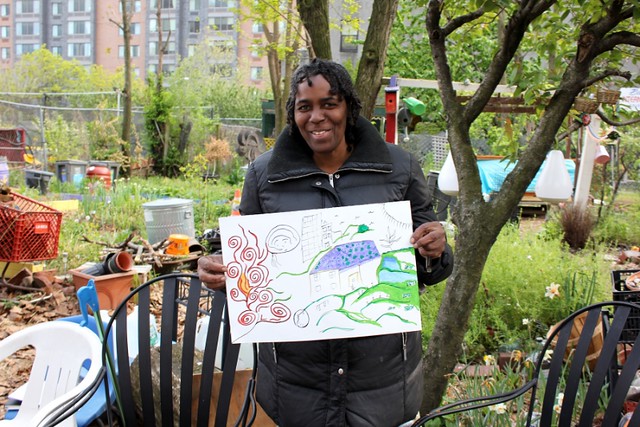 Angela with her Affirmative Art.

In Harlem, New York we met Angela who cultivates rich soil with multi-heart earthworms to create the most fertile black earth. For over twenty years, she has nourished Chenchita’s Garden, a communal oasis of creative green growth on a corner lot in Harlem established in 1973. She took me around, pulling stalks of chives with spherical blooms, mint, spearmint, fennel, and lavender. We set up our first dream table in the middle of the garden, next to the butterfly plot, to the left of the wind-chime tree, and near the wheel-barrel fire pit. Cool evenings kindled by newspapers reminded Marcus of the fires of Kenya he smelled years ago. For her portrait, Angela drew soil and flowers growing from her head as a metaphor for how she’s helped her family and community grow. 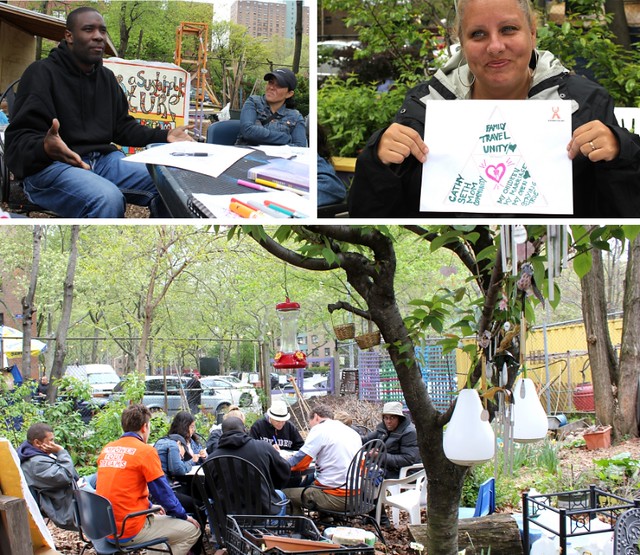 The group was highly mixed: long-term community leaders, a mother and her daughter who happened to be passing by, and a couple young people who were acting as active leaders in their community through poetry, music, and spoken word. One of the first questions people ask about Affirmative Art is: Who is your demographic? Our answer: We are anti-demographic. Our ideal is mixed age and worldview within a certain locality.

Sika with her Affirmative Art after she decides to spontaneously come on the Tour with us to our next stop in Princeton, New Jersey.

Later that evening, we met Sika, a force of strength, beauty, and clarity of vision. Her son recommended her hospitality. At our second workshop at the Farmers’ Market, she was one of us, wearing one of our orange t-shirts. Fully committed, she embodied affirmation. She also drew, furiously, a conversation in purple, blue, brown with strong marks marking future deep connection coming from her strong roots. In her days she’s a mover and shaker to help conscious development in low-income urban areas, a mentor, an artist, a healer, a provocateur of discussion woven with art and emotions. Look deeply at a painting for a good long while and talk to it, go ahead, have that conversation and discover yourself, she says.

Ann (left) and Sarah (middle) and the Princeton Montessori 6th grade with the Dream Machine.

In Princeton, at the Montessori School, Sarah drew the biggest heart as her Affirmative Art. She’s a teacher exuding love and helping these children of privilege see beyond their daily tasks to the bigger impact possible. The biggest surprise in Princeton was my friend Ann, who I’ve known since we were young. She was proud to be the first in her family to receive a Bachelors, and loves her job now, appreciates the stability, and for all these reasons, my heart grew a size when she asked her boss for a half-day so she could join the workshop and draw her dream of “what happy looks like” which was herself in a lavender field.

In Philadelphia, we arrived to what we thought was the wrong location on a residential street. But then we spotted Fen, a blue-bearded artist prepping the front retaining wall for a community mural. We were at Sunshine Arts, on Sunshine Street.

Inside, Patrick greeted us. In black beret and immaculate dress, Patrick perfected the aesthetic of the house over many years, transforming discarded items into a collage of thoughtful whimsy, prodding anyone who enters to rethink their environment. Patrick gave us the tour: a foyer wallpapered with maps, a mini-piano next to an adult upright, two aquariums with sea-turtles and well-fed fish, a grand, gather-around kitchen island that we’d later use for our workshop surrounded by plants and speckled light flowing through a glass-bottle masonry wall. We were truly in creativity heaven.

Downstairs, old solid wood doors made up the basement ceiling. Outside, Patrick’s carefully restored motorcycle, complete with a shotgun-guitar carrying case, would take him on a road trip after their fundraiser. I told Sheila Modglin, the founder and executive director, that the house reminded me of Dali’s home-turned-irreverent museum in Spain. Coincidentally, but perhaps not surprisingly, the theme of the fundraiser is surreal Dali – inspired by the dense experimentation with anything at hand.

Sunshine Arts holds free, open art-making hours every afternoon. Children and teenagers soon swarmed into the art house with the dynamic energy that comes from growing up in a close community. We hosted a workshop with them. Some drew, many talked, a few engaged fully in the experience. One young woman, S, wanted to share her dream with the world: “My dream is to marry whoever I want because in my culture women don’t have a choice. I want to break the norm and in the future, find someone I love and marry them.” We told her she didn’t need to pose with her dream for it to be included online, but she insisted.

2 responses to ““Affirmative Art” offered in communities across the U.S.”