Posted September 17th 2018 at 4:45 pm by Emily Holloway
in Economic Democracy, The Bronx

All in “a day’s work”: a feminist exploration of economic democracy in the Bronx

The walk from the Fordham Road station to the Bronx Cooperative Development Initiative (BCDI) headquarters in the Northwest Bronx is short–two blocks west and a half block south. Depending on the time of day, a commuter wades through throngs of shoppers, vendors, and locals on (and off) the sidewalks. Women are hawking tamales and ceviche out of coolers, juices and peeled oranges out of shopping carts, reconstructing the social economy hour-by-hour. 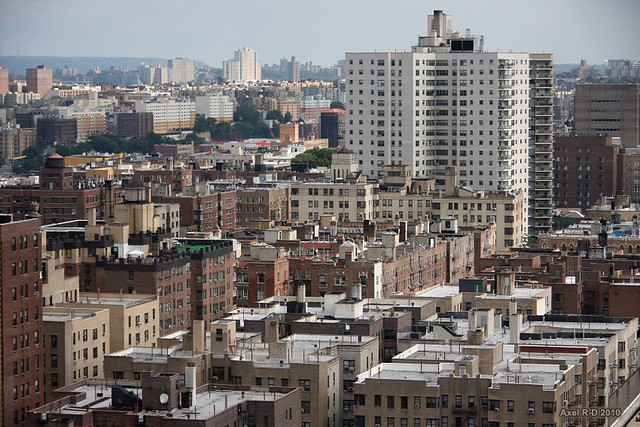 This alternative economy threads the community together. It is the most ur-Jacobsian thing I’ve seen since moving to New York; the most complex and yet the most banal: Everyday, the women (and it is almost entirely women) sell the same snacks and sustenance from the same carts and coolers, probably to the same customers. Sometimes their children are with them. They all have at least two jobs: running their businesses and taking care of their families. Maybe they have another waged job between the morning and evening rush hour. The first shift bleeds into the second, the second into the third. I’ve always been fascinated by the ways women integrate and adapt mothering to their work, and what that reveals about the options they’ve been given, the social networks holding them up (or down), and how these are expressed despite and because of their second shift.

This interest shadowed my research all summer at CoLab and BCDI. It was part of my work to do research with a critical eye on local institutions and organizations, seeking those who operated in a way that met the ethical mandates of economic democracy. Our curriculum and institutional frameworks proffered heterarchical decision-making models, with shared wealth-building as the desired outcome. Cooperative businesses are organizational models that can encourage this, but they are not a guarantee of equality. The inspiration for BCDI’s Bronx Innovation Factory, Mondragon, was itself found guilty of allowing patriarchal structures around labor and decision-making to diminish women’s participation in decision-making because of the ever-present “second shift.” Even after the workday ends, mothers return home to another job, one arguably more important, risky, and demanding. At Mondragon it seemed like the rhetoric of democracy and equality struggled to translate between the factory and the household.

In theory, economic democracy and feminism are not at odds with each other. Do they run on parallel but never-intersecting tracks? Only in practice, and only then when we let them. Both paradigms offer mutually constitutive benefits, strengthening and deepening an aspirational ethics. The largest intersection between the two frameworks, perhaps the most useful and important, occurs when we consider care work and self-determination together. Creating and iterating institutional spaces for this is a way to acknowledge structures of oppression and dispossession, opening opportunities for maximum capacity-building across gender, race, and class.

It was so rewarding to contribute to some of the long-term planning projects at BCDI precisely because this intersection is at the center of their work: reforming and strengthening Minority and Women-owned Business Enterprise (M/WBE) policies to meet the actual needs of businesses owned and operated by women of color, and developing workspaces, tools, and curriculum that reflects the needs of users in the Bronx Innovation Factory. Although New York City already has a nominally robust regulatory framework to support M/WBEs in place, both our surveys and focus groups revealed several structural gaps obstructing opportunities for small businesses owned by women of color. Getting certified isn’t the main problem; getting contracts is. Larger, more established companies are better equipped to provide low prices, maintain cash flow, and meet the stringent and exhaustive bureaucratic demands of government procurement. Small businesses often lack the infrastructure to meet these requirements and end up losing out on the contracts they need to survive. I explore that infrastructure isn’t just business services seminars–sometimes infrastructure for business owners need support with their other job, at home, and even to access this support itself.

Much of the research I did on innovation districts and advanced manufacturing policy revealed cities in pursuit of economic development in these fields that failed to address structural issues impeding access for most workers and business owners, particularly for historically disadvantaged communities. Private, external investment is the main instrument for growth, and growth is abstracted in the aggregate–jobs created, goods sold, tax revenues gleaned, and property values increased. Growth is considered independent of endogenous human capital, rendering any negative effects on incumbent communities largely invisible.

One bright spot on the urban development horizon is found in Chicago, where the Renaissance Manufacturing Council has generated a more holistic pipeline linking education and training to existing manufacturing work in the community. Assets are cultivated locally, not imported. When developing the infrastructure of employment, education, and community, strategies that acknowledge and nurture the clear connections between these categories may prove the most sustaining and equitable. The infrastructure reflects the material needs and embodied knowledge within the community–a valuable development framework to consider how to both support and learn from women and mothers.

The curriculum I worked on this summer, the Economic Democracy Learning Series, reinforced these principles and revealed their interdependencies. Institutional structures, like the M/WBE program or the Economic Development Corporation (tasked with much of the industrial development policy in New York), may be working from the best intentions, but the metrics in use are ill-equipped to address sustainability and equity. “A day’s work” can mean many things to many people, and usually doesn’t end after eight hours. How can policy make this visible? If we build something by and for women, shouldn’t it reflect the structural barriers that allowed this dilemma in the first place?  Sharing the wealth also means sharing the work, whether it’s paid or not.