Alternative Futures: The Bus Broke Down on a Tropical Summer Day 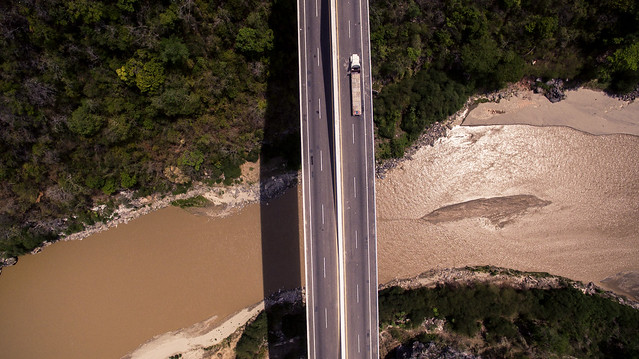 Steven could not abide the heat and humidity anymore. The tropical summer sun was bearing down on the window where he was sitting. The bus’s engine had seized long ago and with it the cooling system. The driver urged the half dozen passengers to stay on the bus. This was alien territory. Who knew what they could do to a multi-generational like Steven? But a dozen hours at a computer to support Monica and the children and that tropical North American heat pushed Steven’s brain into a new direction.

“Let me out,” he growled at the nervous driver who mumbled, “You’re crazy, man,” before opening the door and shutting it just as Steven stepped from the bus.

The street was empty. Among a grove of sabal palms stood pink blue and green cabins with thatched roofs. Steven couldn’t see anything inside of them. Across the roadway, he heard the comforting hum of a solar cooling system. He recognized the building as some kind of official facility. It was two stories tall and made from reinforced polycarbonate.

The cold air inside the building brought Steven immediate relief. In the hall were long tables with chairs at their sides. On one of the tables, someone had left four or five thick hard cover books stacked on top of each other. Beyond the tables were rows of bookshelves that stretched to the end of the building.

Steven wanted to sit down and started moving towards the tables.

“May I help you?” a female voice asked, startling Steven.

“You speak English?” he asked the woman.

“I’m the librarian. Why would I not speak English?”

“You’re an alien. Aliens refuse to assimilate to our way of life. You want to destroy our country.”

“Am I threatening you now?” the librarian asked. “Why did you leave the bus anyway if you think we so called aliens want to harm you? Did you know that my brother is on his way with water for the other people on your bus? You have guts, though. Maybe you doubt your multimedia philosophers who want to keep you scared.”

To his surprise, Steven actually felt quite comfortable with the woman as she spoke to him. He liked her pleasant face.

“Take a break. Read a book,” she said. “No one will bother you. I have to go upstairs to my office for a moment.”

Steven had not held a physical book in his hands in years. He sat down and picked up the nine hundred page History of Cultures volume that was lying at the top of the stack of books someone had left behind on the table where he was resting. The book was fragile; its pages slim and prone to disintegration. Published in the penultimate year of the 20th century, the book, Steven immediately assumed, was a product of chaos and delusion. He judged the two writers to be multi-generationals by their names, though such classification did not exist at the time. Steven was wrong in his judgment. The writers had come to the continent from Jamaica to join its universities and contribute to human knowledge. Ironically in Steven’s time, aliens in United North America were quietly leaving the continent for the freedom of the Caribbean Confederation, of which Jamaica was an integral member. They did not see a future for themselves or their children on the continent.

Steven was very gentle with the History of Cultures. He laid the book on the table and turned to the introduction. “You may think of yourself as American, Canadian, German or French. Yet, clearly, these national identities are the products of many cultures, including those that you probably rarely think about. The fact that when your son or daughter turns ten, you write 10 and not X is because western cultures adopted the use of Hindu-Arabic numerals in the middle ages. Have you ever considered how else cultures from different parts of the world have influenced each other? If your answer is yes, then this book will take you on a journey that will leave you thinking about how interconnected we humans really are.”

Steven stopped reading. The tone of the text was full of hope and yet obviously naïve. As a multi-generational Steven had spent his life speaking up against aliens who had rooted themselves in United North America. Isolating them was the only way to maintain the culture that multi-generationals desperately clung to.

“Are you enjoying the book?” the librarian was walking down the stairs. In her right hand she held a large ceramic mug full of cold water. “You are undoubtedly thirsty,” she said. Steven was too emotionally muddled after reading the introduction to the History of Cultures to answer the woman.

“My name is Mara,” the librarian said as she placed the mug on the table. She was careful not to put it too close to the book.

Steven stared silently at Mara for a moment. She pointed to the glass of water and said, “You’re certainly thirsty.”

Steven drank the water quickly. He wanted to rail against the nonsense on cultures that he had read but instead said, “Thank you for the water.” His initial burst of anger was already subsiding.

“You don’t believe what you just read. I know you don’t. For now that’s fine. You and I are still talking to each other, which leaves me hopeful. On a more immediate topic, my brother Lew has arrived with his water tank. We should return to your bus.”

Remembering the painful intensity of the sun battering the city, Steven to his surprise found himself wishing he could stay inside the library. “I don’t think Mara means any harm,” he thought to himself. In fact, Mara reminded Steven of several multi-generationals he considered to be his friends.

A crowd of nearly forty aliens had gathered around Steven’s bus; they were all perspiring and tired; they wanted to help the stranded multi-generationals. Among them stood a hydrogen-powered transporter with a 2000 liter tank of purified water positioned upright on the loading pallet behind the cab. The self-cooling fiber lining the tank kept the water from boiling.

Lew was knocking on the bus doors and crying loudly, “Please, come out.” Noticing Mara, he said, “They refuse to leave the bus. They’d rather perish than deal with us.”

Mara turned to Steven. “Can you convince them to come outside?”

For a long and difficult moment, Steven did not know what to do. The crowd’s attention was directed at him. “I’ll try. Of course. This is a life and death matter,” he said.

With his face centimeters from the windshield, he motioned with his hands to the passengers on the bus to approach him. Only the driver, a slender young man, dared to come closer. His face and hair were drenched. He did not want to be on the bus. “No one else is coming to help you,” Steven said loudly. “This is your only chance to survive. Stand back.” The driver furrowed his brow in confusion. “Stand back,” Steven said louder. The driver retreated. Steven took two steps backwards, formed his right hand into a fist and with all his might punched the windshield. To the amazement of the passengers and onlookers, the windshield cracked around its perimeter and fell onto the street with a loud thud. Now the multi-generationals had no choice but to accept help from the aliens and start to understand who these people really are.