Posted January 30th 2015 at 12:26 pm by Lillian Jacobson
in Drawing Outside the Lines: Community-Based Design in Unincorporated Communities

This is the second post in Drawing Outside the Lines: Community-Based Design in Unincorporated Communities, which chronicles a series of design workshops (“Visioning Sessions”) with high schoolers in an unincorporated area outside of Santa Rosa, California. Read the history of this community here.

In this session, my goal was to get to know the students, understand their feelings about the neighborhood, and discuss what it means to be an unincorporated community. I started with an activity in which the students mapped their route from home to school and marked places where they felt safe, unsafe, and places they avoided entirely. I then asked them to draw and describe some of these places, and think about why they felt the way they did. Students were asked by their teacher to write a reflection after the session. One of the students noted that listening to his classmates’ perceptions had opened his eyes: “I began seeing a pattern in the areas that people considered safe and unsafe. The safe areas had good lighting, safe sidewalks, and sometimes a park. These areas were well-maintained and within the city of Santa Rosa. Most of the unsafe areas don’t have good lighting and sidewalks, have gangs, and are in unincorporated areas.” 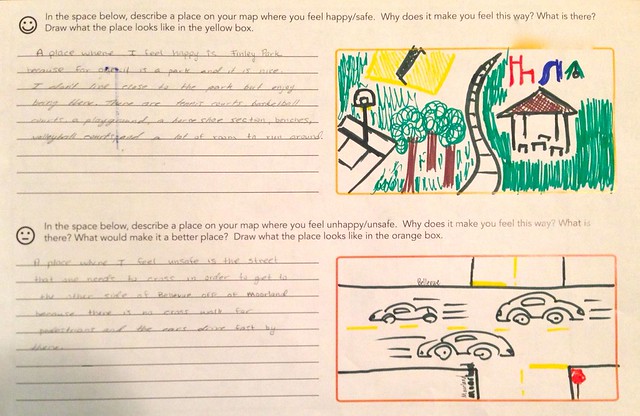 Back of Mapping Route Home Activity

As a planner, these answers were unsurprising, but the students’ reflections after only one session revealed the power that can result from seeing common experiences amongst neighbors and classmates. One student wrote, “There is a better chance to make a positive community when you know that someone believes in the same thing as you.”

The second half of the workshop was dedicated to learning about unincorporated areas, and why residents outside Santa Rosa’s city limits experience disparities in health, safety, and life outcomes. Students put stickers on a map, marking where they live, and we looked at the city limit together. 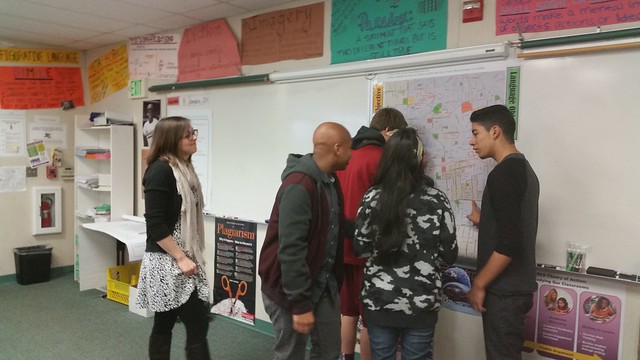 I should note that the City of Santa Rosa has an extremely irregular city boundary. The City’s history of unfair annexation practices and “cherry picking,” has led to dramatic inequality between its incorporated and unincorporated areas today (see my previous post for more detailed information on this issue). 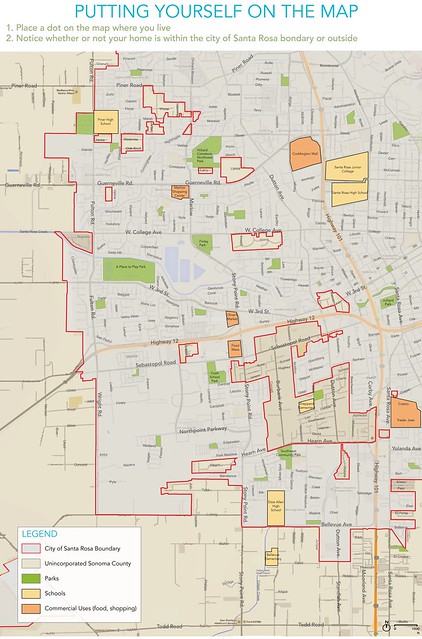 Elsie Allen High School sits on the border of the city limit. Students’ homes in the school district are split between unincorporated and incorporated areas, and many students did not know they lived outside the city limit. We did a “Stand If” game, in which I asked students to stand if they had certain amenities in their neighborhoods, such as parks, sidewalks, community centers, grocery stores, street lights, etc. The students who were left seated at the end of the game all lived in unincorporated areas. I then asked the students to “stand if you’re a brilliant student at Elsie Allen High School” to remind them that they’re all part of the same community.

The students were startled at the injustice when they learned that within their own classroom, some people didn’t have access to services in the same way as others. I am quickly learning that one of the most important aspects of community-based planning in unincorporated areas is this initial step of making residents aware of city/county jurisdictions, annexation, and the reasons for the disparities they experience on a daily basis.

I will end this post with a quote from one student, Amandeep, whose reflection essay was incredibly moving to me: “Growing up in Moorland [Avenue] since the age of five, these problems were all normal to me, and getting older I soon became aware of the injustices. However, I did not know that the reasoning behind it was because Moorland is not actually part of the city. Learning this is quite frustrating, especially knowing that a few people high up in the local city government could have just annexed Moorland, and in doing so the livelihood and wellbeing of children and families would have been much greater. This motivates me to act, and if the benefit isn’t for myself, it will be for the future generations of residents in my neighborhood.”