Ask, and you shall receive? Making asks of strangers in Lagos 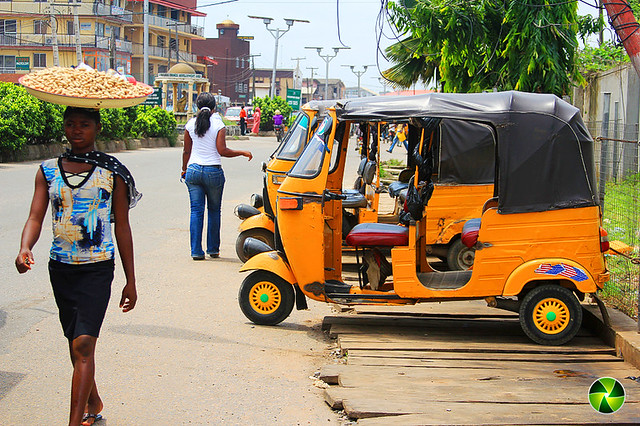 Though initially a bit nervous to allow Vocal Slender, my colleague and local celebrity, to show me a new way home, I finally caved. The commute by danfo buses from Sabo to Oyingbo and then finally to First Gate was getting to be too time consuming and stressful. So under the hot afternoon sun, we trekked the short distance from the office to the Sabo bus stop where keke marwa and danfo bus drivers belted out, “Office Oyingbo” and “Estate Oyingbo” in rapid succession. Shortly after mounting the Office Oyingbo keke, we were on our way to Oyingbo market. At this transfer point we disembarked and quickly crossed the street. Careful to maintain single file formation, we hugged the side of the road, keenly aware of the lack of a sidewalk as we remained on high alert as vehicles whizzed by beside us. After walking for what seemed like forever while the scorching Nigerian sun beat against our skin, Vocal approached the first driver in a line of kekes and asked for one going to Costain. He directed us to the last one in the queue and we swiftly boarded, hopeful for some respite from the sun’s glare. About ten minutes into our trip, we began to approach our destination, so the driver requested our fare.

The man seated next to me offered him a 100 Naira note and said that it was for two passengers, himself and his companion. For that particular keke, the fare was only 30 naira per passenger.

Vocal looked at him and asked “why not make it for three?”

I glanced at Vocal, surprised that he would make such a request from a complete stranger. For a few moments, the man stared on quizzically, as if asking “Do I know you?”

But much to my surprise he then told the driver “Make it for three.”

Vocal then added 20 Naira to make it a complete 120 for all four passengers, including me.

Once we disembarked from the vehicle, I wondered aloud “Why did he pay for you?”

Vocal responded, “Because I asked.”

This post is part of a series, Danfo Days, where Bukky Adebayo is sharing snapshots of what living in Lagos is like through her commuting experiences, especially via danfo buses.