Posted November 12th 2015 at 12:20 pm by Jason Spicer and Lily Steponaitis
in Banking On Values in Action

This is the fifth in a series of blog posts by Jason Spicer and Lily Steponaitis, who are both conducting research on values-based banking in association with the work of MIT CoLab’s 2015-2016 class of Mel King Fellows. This summer, they were based at the offices of the Global Alliance for Banking on Values (GABV) in the Netherlands, and travelled to meet GABV member banks around the world. 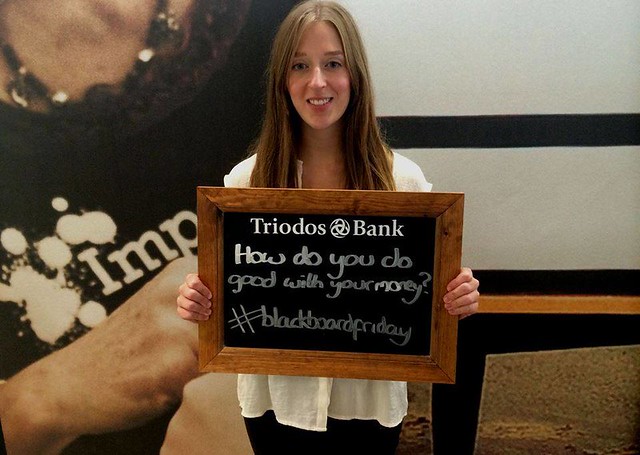 A founding member of the Global Alliance for Banking on Values and a leader in the sustainable banking movement in Europe, Triodos Bank is headquartered in the Netherlands and has branches in Belgium, Germany, Spain, France, and the UK. With over $10 billion in assets under management (AUM) in 2014, it is one of the largest banks in the GABV network.

The Triodos banking model is built around three pillars: investment in the environment, culture, and society. The bank only invests deposits or client assets in businesses and organizations that fall into specific categories — renewable energy, organic agriculture, health, affordable housing, education, and the arts — and are “best in class” within those categories.

Triodos’ reputation has in part been built on its early environmentally sustainable banking practices. Following the 1986 Chernobyl nuclear disaster in Ukraine, the bank was approached by depositors interested in financing alternative forms of energy in Europe. Wind energy was the primary candidate, even though it was a new technology and a risky investment at the time, due to the lack of government subsidies. To reduce the risk undertaken by the bank’s depositors, Triodos developed the first Wind Fund in Europe. They used the fund to raise external acquisition capital for wind farms. This proved to be quite profitable. It also diversified the bank’s business and added new, environmentally minded individual and institutional investors to their client base.

Today, the fact that an energy project is renewable or sustainable, isn’t enough reason for Triodos to consider it a good investment. The project must also be “best in class”. For example, when investing in solar energy farms, Triodos takes into consideration the potential productivity of the land in question. Triodos will only consider a project as “best in class” if it avoids high quality agricultural land and focuses on increasing the value and productivity of otherwise marginal land.

In addition to the wind fund, the bank also runs a culture fund. This fund is the first of its kind in the Netherlands and offers a unique product. Publicly-traded and listed, it allows individual and institutional investors to lend money to theaters, museums and artists for a wide variety of uses, including new creative endeavors, acquiring supplies, or renovating space. The fund often provides “gap financing” for projects which have some funding from other sources, but need more money in order to come to fruition. While returns on the fund are modest, it is extremely popular and trades well.

The bank’s commitment to society is evident not just through its loans, but also through its internal practices. Reflecting Triodos’ commitment to client engagement and transparency, the bank’s website hosts an interactive map detailing every business loan and investment Triodos makes. Using the map tool, customers don’t need to wonder where their money is going. They can know exactly what their bank is funding.

Unlike the other banks we have explored thus far in our series, Triodos is not a cooperative, so the clients don’t directly control the bank in the same way they do at Vancity, Crédit Coopératif, or Banca Etica. Rather, Triodos shares are held by the Foundation for the Administration of Triodos Bank Shares (SAAT).

Since its founding in the 1980s, Triodos Bank has been a pioneer at the cutting edge of sustainable banking.  The bank’s reputation is built around the fact that every single one of its loans aligns with its social, cultural, and environmental mission.  Though this reputation has contributed to the bank’s strong and consistent growth in recent years, it also carries with it a major risk for the bank.  That is, if Triodos makes a loan that is somehow inconsistent with its values, its stellar reputation and the trust of its customers could be in jeopardy.   As the bank grows, hires more employees, and makes more loans, this risk becomes harder to manage.  Yet as we look into the future of sustainable and values-based banking, the question of scale is a critical one.

How large can a sustainable bank grow, while staying true to its core mission and practices, and continuing to innovate?  If Triodos continues to grow and thrive, it may become a powerful example of sustainable yet scalable growth for the rest of the values-based banking movement.