Posted December 14th 2017 at 9:38 am by Jessica Weaver
in PAR, PAR in Boston, Participatory Action Research

Because I’m Not Waiting Until 2121

But we really shouldn’t be surprised, given this recent trend, to see that in many ways, it did: we actually lost a number of women in federal elected office last year. As of 2017, we’ve seen some significant strides, but our low ranking remains the same. If current trends persist, I won’t see gender parity in my lifetime. The year will be 2121 when parity is achieved without significant intervention. And that’s not acceptable to me. It’s clear to me that our conversation about women in politics needs to change.

Leading up to the election, among many public narratives I found disconcerting, one that troubled me most was actually coming from my feminist friends and family: the conversation about shattering the glass ceiling. Of course I was excited that a woman was finally a presidential nominee. But we were talking about Hillary Clinton’s possible ascension to the White House as though it was the ultimate accomplishment for women in politics. As Obama’s historic 2008 election showed us, symbolic representation matters deeply, but what matters more is statistical representation. Actually representative representation. And even before Clinton’s defeat, we were nowhere near gender parity in political representation.

So I started researching, through my master’s program in Civic Media at Emerson College a simple but expansive question: why don’t we have more women in politics? It’s easy to just say “sexism!” with a shrug, but you get no gold stars from me. The reasons are multifold, spanning the power of incumbency, the wage gap, the role of the media, and the structure of elections themselves (ranked-choice voting, as compared to winner take all voting, for example, is more likely to benefit women and candidates of color).

But one of the key issues is that the pipeline to office is anemic. Women are just as likely to get elected – it’s that they are far less likely to run, stemming from self-perception that they’re not qualified to run. My research spanned studies on psychology, policy, education, sociology, and the media, as well as interviews with organizations dedicated to training young women to run for office. My findings showed that the key factors that are likely to make women to want to run are:

Confidence is an issue, to be sure, but whereas many young women exercise their civic muscle in advocacy, community service, or other leadership activities, few connect their innate potential to political leadership. As I thought about what kind of intervention fosters that kind of imagination I decided to speak with women of all ages who were running or had run for office. These conversations lead me to center on the concept of a game.

Games create an interactive space in which players have the “freedom to fail.” You can play without feeling personally vulnerable. I also wanted to create a space that would disrupt some of the perceptual barriers I shared above, allowing young women to imagine running for office without feeling like they have to be experts or that their reputation is on the line. Whereas formal curriculum and didactic presentation might just teach about the issue, a game can foster imagination and empathy. Games can also be an entry point for a conversation about substantive issues, especially in a classroom context, and in particular if the game is played by men and women.

To create content for the game, I wanted to learn as much as I could about the experiences of women in politics: What did they think was most relevant? What did they wish they had known? What was helpful for them when they ran? These were investigations, but they were also opportunities for developing game characters. I interviewed former legislators, current candidates, campaign staffers, and program staff at national organizations dedicated to women in politics. I also interviewed some students.

In creating and iterating the game, I engaged a wide range of stakeholders, from student game designers (including a student who became my co- designer), professors, several classes, student associations to community partners. I organized regular playtests, including a game facilitation, with the target audience, and also conducted post-game focus groups with college and graduate students, a slight majority students of color and female, but also with young men. Most were relatively inexperienced with games and had wide ranging degrees of political interest. 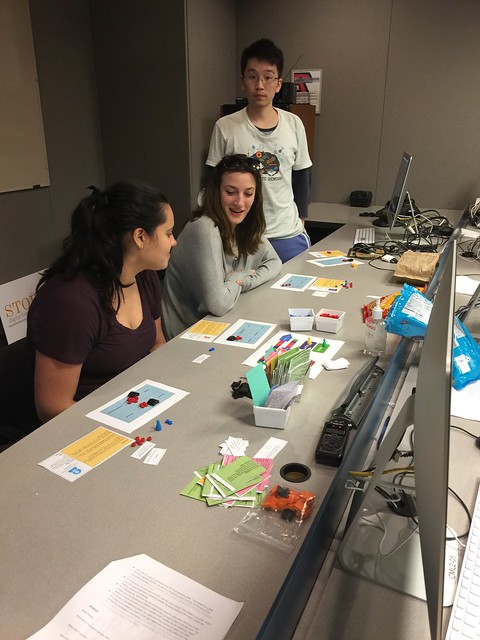 Photo: Three people during a playtest of the game.

At the end of an exhaustive participatory design process, I emerged with a game called 2121, named for the year in which, without significant intervention or advocacy, the US will actually see gender parity in political representation. 2121 is a role-playing tabletop card game designed to foster political imagination in young women and promote dialogue about issues of gender and identity in political representation. Following a guided facilitation (ideally by an educator in a classroom context), each player (male or female) acts as a real woman who is running or has run for office. Players engage in role-playing, strategic decision-making, and learning about the history and current state of women in politics. 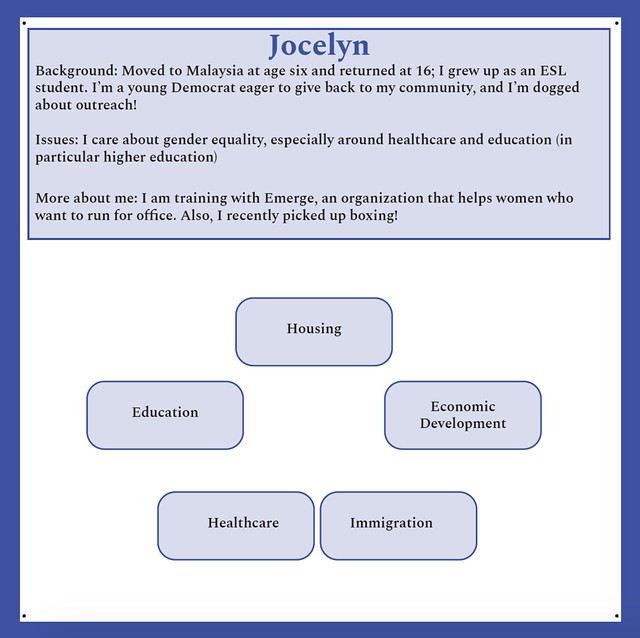 Photo: An image of a card that describes one of the game characters.

For each playtest, we would begin with a version of the facilitation that gauged students’ current levels of political interest, but also discuss impressions about gender and politics, why it matters, and what’s preventing us from making more progress. After the game, I’d conduct a mini focus group that was designed to explore if, how, and why students experienced shifts in self-perception or political interest, and also self-reflect on their experience of the game…where did they feel excited, immersed, or frustrated?

These were not just tests, though… they were participatory design sessions. I told students to feel free to come up with ideas during play, and often we’d implement them mid-play. I kept saying the phrase, “Oh, I love that idea, let’s try that out,” and those students are directly responsible for shaping the final prototype…and it wasn’t just mechanical tweaks. One student recommended, for example, that rather than issuing a debate challenge directly to another player, which could be a really intimidating experience, challenges be open to any who wanted to participate based on their comfort with public speaking and with risk. 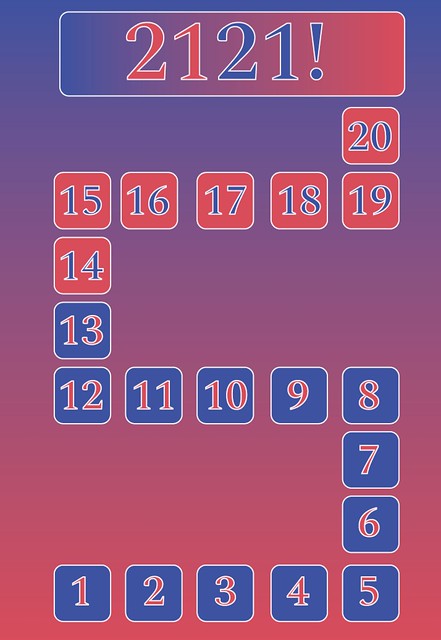 We emerged with a game that offers powerful conversation starters about gender and identity in politics. It builds a playful environment that otherwise is associated with intimidating stakes and personal vulnerability. The conversations we had were really substantive – students grappled with what it meant to play as someone with a different political persuasion, and how men experienced playing the game.

In September of this year, my undergraduate design partner and I were selected as recipients of the Massachusetts National Organization of Women Foundation’s “Feminism in Action” grant. The funding will support the two of us to pilot 2121 in four high schools and four colleges and universities in the Boston area. One of our primary learning goals for the next round of testing is whether or how the game can complement curriculum or programming around civic engagement for educators. We haven’t yet had a chance to explore that and that’s why I’m so excited to test and iterate the game in this context.

Not only do we want to create a game that has been vetted by educators and youth, but we also want it to be meaningfully improved by their ideas and customizations. We hope to scale the final version of the game to classrooms across the country to support our ultimate goal of encouraging the next generation of women to get more politically involved!

Stay tuned as we continue to talk with folks who are facilitating and playing the game. And if you or anyone you know might be interested in this, let us know. This is everyone’s issue and we need to start acting like it!