Big (but not Bad) Business: Cooperatives 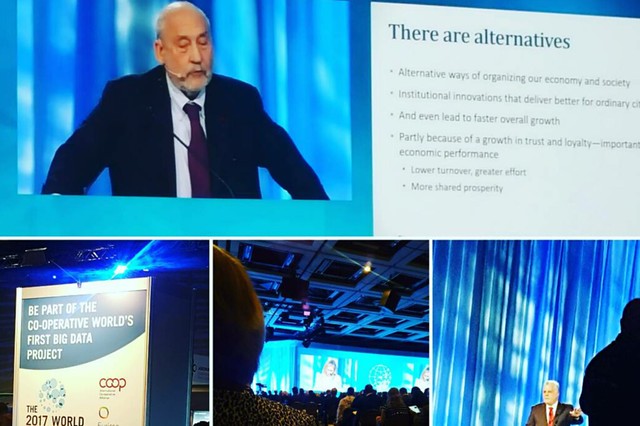 In the US, October is National Cooperative Month, highlighting the role of cooperatives in society and business. For many Americans, the word “cooperative” conjures up decidedly unbusinesslike images. When I’ve asked friends what the word calls to mind, I hear: “It’s something for hippies from the 1960s”, or “that’s like communism, right? Like, 5 year plans, farmers with sickles, all that kinda thing?”

If the cooperative sector were a nation, its output would rank fifth, just behind Germany, ahead of Great Britain. The sector’s reach was on full display last week at the International Summit of Cooperatives in Quebec City, where 3,000+ individuals from cooperatives in over 100 countries were in attendance. They spent the week engaged in thoughtful deliberation on how best to continue to grow the sector to meet the United Nation’s Sustainable Development Goals, with a focus on ending poverty and hunger, reducing inequality, and protecting the planet.

Launch Video of the International Summit of Cooperatives 2016

Beyond being owned by members, the chief difference between a cooperative and an investor-owned business is its “one person, one vote” governance model. This is contrasted to the more typical “one dollar, one vote” approach of investor-owned businesses. As summit participants this week heard from Joseph Stiglitz, this “one dollar, one vote” approach has spread into US politics and government, thanks in part to US Supreme Court decisions like Citizens United.

The appeal of the cooperative business model is thus easy to see: community members can use it to own a business, bank, land/housing, or energy/utilities, and the profits generated from those efforts will flow back to them. Through the ownership and control, it also reduces the risk of companies abandoning communities, moving across the country or the world for lower costs. In the energy sector, benefits multiply: in cooperative “community energy” efforts in Germany and Denmark, for example, citizens own local solar and wind power installations. Not only do they control their own energy supply, they do not need to import energy produced elsewhere, and can sell excess energy back to the grid.

It’s no surprise then, that a wide range of people are interested in using the cooperative model to do business a different way, to responsibly meet the needs of communities, to share value generated with everyone who was a part of the success, and to respect both people and planet. Both the Occupy and the Black Lives Matter movements, for example, have promoted the cooperative business model, as have other social movements around the world.

Summit participants also heard how cooperatives are on the rise in the world of “digital labor” and the “gig economy”, through the sharing and platform economy. This is occurring through “platform cooperativism”, a term coined by New School professor Trebor Scholz. Both he and CU-Boulder fellow Nathan Schneider, who both spoke in Canada last week, have popularized the term in describing cooperatively-owned platform businesses. In the platform economy, flat, broadly distributed networks are the source of great economic value. Think of Airbnb.

In a traditional hotel, the value is all centralized in the hotel and its hierarchical, self-contained operations. With Airbnb, the value is in the network as a platform: the network of consumers who use the web site as a platform to find accommodation, and the network of households who act as suppliers of extra rooms and unneeded space they’d like to rent out to guests. The same holds true for Uber vs. a taxi company. These types of businesses are ideally suited to the cooperative business model, in which ownership and control is broadly distributed and shared across a network of participants.

As Jeremy Rifkin said, the “third industrial revolution” of the communications and energy technologies of today are such that “if cooperatives didn’t exist, we’d have to invent them”. Why? According to Rifkin, the flat, widely distributed, and networked business models of these platforms, as mentioned above, along with the zero marginal cost of some services in the “internet of things” are better aligned with the shared value and broad ownership model of a cooperative, than with the hierarchical, vertical and profit-maximizing approach of corporations. Rifkin is working with a number of European regions on their Smart Cities initiatives, where he sees a prominent role for cooperatives.

So where are the cooperative models of Airbnb and Uber? In fact, cooperative versions of Uber and other businesses are being formed every day: earlier this year, MIT Media Lab professor Sasha Costanza-Chock and their Co-Design students helped host the Boston location of the international #CoopDiscoTech, or the Cooperative Economy Discovering Technology fair, which featured a range of cooperatives developing sharing economy applications. If you’re interested in learning more, next month, many of these platform cooperators will be conferencing in New York, at the Platform Cooperativism conference at the New School.

Post and photo by Jason Spicer. He is a PhD Candidate in the Department of Urban Studies, currently completing research for a dissertation on the challenges that cooperatively-owned businesses in the US and other developed democracies face as they try to grow.