#Citychat on Climate Adaptation – The Role of Social and Community Capital 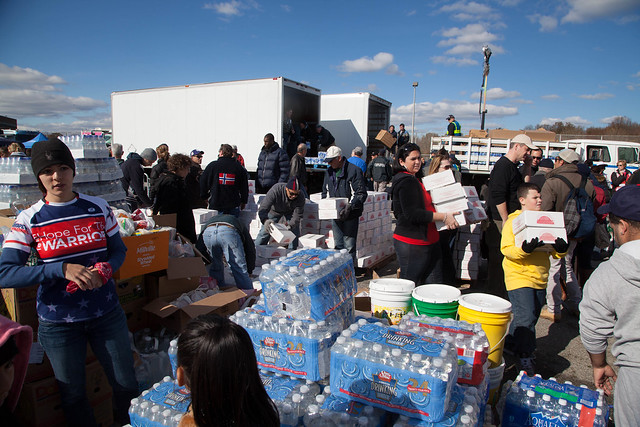 On Thursday April 28th at 3 p.m. Eastern Time, MIT CoLab (@MITCoLab) and Emerald Cities Collaborative (@EmeraldCities) will co-host a Twitter chat (#citychat) on the role social and community capital in climate mitigation and resilience. This conversation is the third in a series of four co-hosted Twitter chats broadly addressing equity, economy and climate resilience in low-income communities of color.

Social and community capital are essential when low-income communities and communities of color seek to build climate resilience before and after extreme weather events. During the immediate aftermath, awareness of where elderly and other vulnerable residents live and of their daily routines – knowledge that is part of the social fabric in cohesive communities – can literally save lives. Well-connected community groups disseminate critical information, especially when power lines and communications systems are down, as well as act as safe havens for the displaced.

She added these lessons learned about the characteristics of resilient neighborhoods and their role in disaster preparedness (emphasis added):

And even as New Orleans struggled to recover from 2005’s Hurricane Katrina in the face of challenges including “poor communication and responsiveness, especially between City Hall and neighborhoods,” community social capital made a difference. In an article on preparedness, Natural Resources Defense Council Senior Advisor Deron Lovaas describes the Village de L’Est, a Vietnamese community on the eastern end of New Orleans, as an “active hub of recovery activities.” Post Katrina, he said, the local Mary Queen of Vietnam church gathered and distributed emergency supplies, leading to rapid rebuilding and the neighborhood’s “astounding 90 percent population recovery.”

As panelists at a June 2014 Emerald Cities Collaborative forum on resilience made clear, community engagement is essential for equitable resilience planning. This means advocating for structures and processes that give residents of low-income communities and the organizations that represent them a voice in the process.

Such inclusion helps ensure that rebuilding plans do not run roughshod over frontline neighborhoods and are likely to include community benefits, including local jobs. For example, following Superstorm Sandy, ALIGN: The Alliance for a Greater New York led a coalition of labor and community groups in proposing a plan to address climate change from both carbon-reduction and resilience perspectives, while creating thousands of good jobs.

Similarly, recommendations from the Alliance for a Just Rebuilding included ensuring that rebuilding projects create family-sustaining jobs; requiring long-term affordability for housing built in storm-affected communities; and investing in and bolstering resiliency in public housing.

During the April 28 #citychat, the questions we’ll explore include:

Join us to discuss these questions and share your ideas and experiences related to the role of social and community capital in building community climate resilience.