Posted May 8th 2018 at 10:30 am by Cesar Castro
in What does community development mean to you?

Co-Opting Change: Community Development in the Context of Neoliberalism 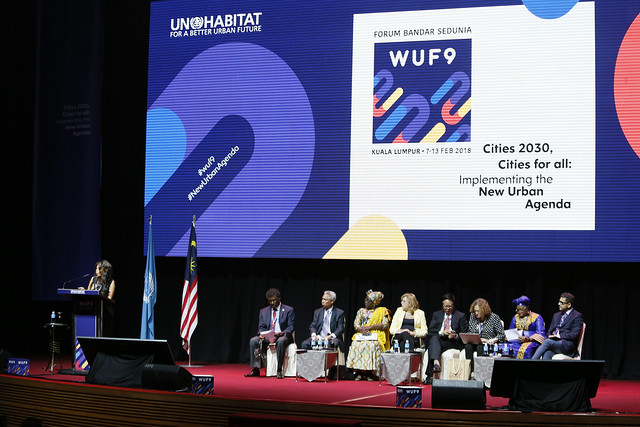 Caption: 8 people are seated on a red-carpeted stage and one additional speaker standing at a podium to the left of the seated people. A projection of a presentation from the UN-HABITAT program is on a screen above and behind the seated officials. Photo credit: Jeremias Thomas / UN-HABITAT Flickr Photos

Early in 2018, I had the opportunity to attend the World Urban Forum hosted by UN Habitat in Malaysia. Among the many sessions in the forum, the workshop presented by Slum Dwellers International (SDI) on participatory upgrading of slums and informal settlements through partnerships between government and grassroots organizations caught my attention. Not only was the content intriguing, but I also wondered for what it meant in terms of community development that SDI was at this event. It has taken years of work for an organization such as SDI to get to this point and I was curious what the co-optation of its mission and goals by governments and international agencies might mean for the well-being of slum dwellers around the world.

Slum Dwellers International, or Shack Dwellers International, was a movement that began in the informal settlements of South Africa. As their work and movement spread to other countries and regions, the network not only grew in size, but also in complexity in its approach to the work and thought-process behind the array of strategies available to represent the needs and shortcomings of informal settlements.

In countries such as India, for example, SDI’s organizing and presence became crucial in negotiating for the land tenure rights of informal settlements in Mumbai and elsewhere in the country. SDI’s focus on providing a platform for women in informal settlements to organize also helped to distinguish the group from others working in those settings and give voice to an underrepresented demographic with untapped political and social power and potential. As the network expanded to include a savings program, community-based economic development, and the mapping of slums, it began to think not only spatially about the conditions that give rise to informal settlements, but also the geopolitical trends and neoliberal climate across the globe that have allowed for similar social and spatial conditions to occur in the slums of Kenya, India, and elsewhere in the world. In other words, the network began to plot, link, and give voice to a system of informality that to many was the direct result of a number of factors:

But by the time the representatives of SDI from South Africa sit down in front of a room full of World Bank and UN officials to present in Malaysia, one has to wonder whether the many years of organizing have led to this point and achievement to have everyone listen to their goals or whether the co-optation of their work and mission by the UN-Habitat is merely another strategy to slow down their potential work and threat as a global organizing body for the urban poor. Perhaps I am merely paranoid, but deep inside I could not shake the feeling during workshop that SDI was being led back to a path controlled by neoliberal interests, into a world in which so-called slum upgrading was a good thing, despite evidence from India and Latin America showing that at best so-called slum upgrading is marginal beneficial to people living in informal settlements and highly profitable as a step towards the gentrification that real estate developers desire.

And if that is that case, what does that mean for the future of informal settlements? Does community development truly have no way to avoid such pitfalls? Is community organizing destined to merely fulfill the needs and wants of a neoliberal system?

When the best example of global community organizing is paraded and showcased by those in power, one does have to wonder about what other ways this could have ended, and whether true community development for the poor is even possible…