Posted August 8th 2016 at 10:28 am by Tito Francisco Chile Ama
in Stories from the Field

Creating a Collective Memory of Genocide in El Salvador

Note to readers: This post is available in Nahuat, an indigenous language, and Spanish. It includes graphic photographs taken in 1932, depicting genocide. 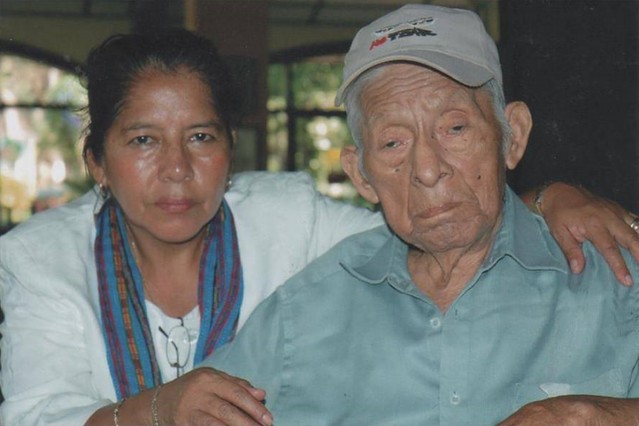 When I was a child my grandfather, Higinio Ama, gave me his knowledge every weekend. He told us – my siblings, too – about life, nature, agriculture, and also the most painful moments in the history of our people. An ancestral way to transmit knowledge in our community is oral tradition.

My mother, Juliana Ama, always asked my grandfather to talk about what happened in 1932. She tried to get all of our elder relatives to talk about it. After that year, our community changed. When my grandfather finally tried to speak about what happened in 1932, it was too difficult. I remember that, as he spoke, he transmitted a feeling of sadness towards us. With tears on his face, I remember my grandfather saying, “The army wanted to kill us. I was hidden for many days, maybe months. Water, tortillas and salt were my food.” 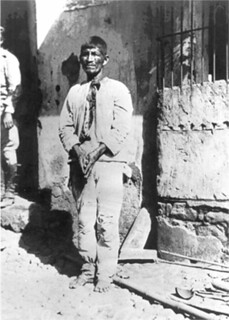 In 1932, my grandfather was 19 years old. He was a member of the indigenous community of El Salvador. He was also the nephew of an indigenous leader, and so he became a principal target of the national army.

My ancestors lived in what is now Central America for many generations before the Spanish colonizers arrived. In 1881, the government of El Salvador eliminated the indigenous communal lands, and those lands become private property.

During the 1930s, El Salvador had many problems: social inequality, poverty, political changes, and economic problems. These problems were nationwide, but the impact on the indigenous community was particularly harsh.

On January 22, 1932, more than fifty years after the government took our lands, our indigenous community claimed equality. My elders, who were young men at that time, tried to reclaim our lands. They went out on the streets and said together: “We want our lands.”

The government responded by killing an estimated 30,000 – 40,000 indigenous people and burying them in mass graves. The indigenous leaders were killed, including my granduncle Jose Feliciano Ama, the main indigenous leader from the Izalco region. The army hanged him in front of the entire community, including children. 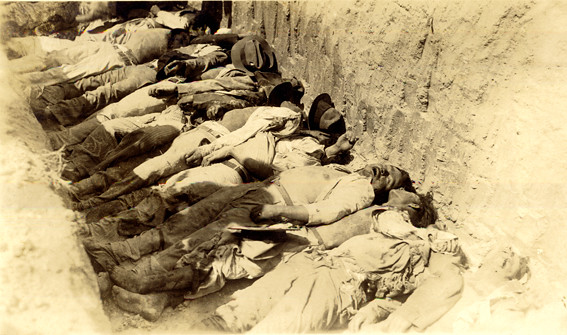 The government also accused the indigenous people of being communists. The violent event in 1932 changed the history and life of an entire country, as well. As a Salvadorian society, we lost a part our identity. 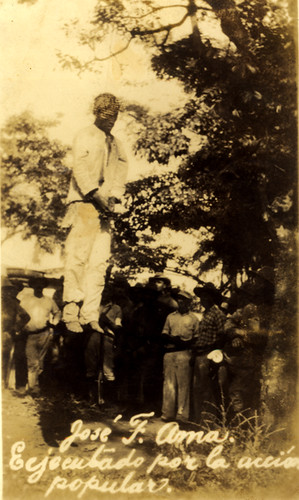 Seventy years later, circumstances within Salvadorian society still did not allow for speaking freely about 1932. One reason for the silence was El Salvador’s 13-year civil war, which ended in 1992. Both guerrillas and the army evoked 1932 in favor of their interest. The government, army, and the right wing party claimed to have destroyed communism in 1932. Meanwhile the guerrillas said they had started, that year, a huge social-communist movement.

Both groups, the government and the guerrillas, discredit the ancient power of organization of the indigenous population, who were not starting a communist movement, but simply claiming access to our ancestral lands.

In 2000, when my grandfather was still alive, my mother began an annual ceremony in honor of our ancestors killed. For five years, from 2000 to 2004, it was just a small, private ceremony. But at the same time, my mother had started to gather support from other institutions in order to make public acts of moral repair for the genocide we suffered.

In 2005, a few organizations joined my mother’s idea. El Museo de la Palabra y la Imagen (MUPI) became fundamental supporters for the new project, called “January 22, a commemoration of genocide, 1932”. MUPI has continued supporting this project for all these years.

Finally, after 73 years, the first public commemoration of genocide took place in Izalco city. The Izalco region was at the center of the genocide in 1932. 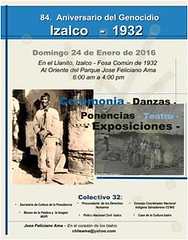 Commemoration Flyer for the 84th anniversary. By Tito Chile Ama.

When we started the commemoration project, various leaders and members of the public accused my mother and family of being guerrillas, and being part of the political left party. We were derided. Though the commemoration continued despite those accusations, those years were difficult for me. I felt so bad under public scrutiny, and having to deal with false accusations. As a family, we could not say anything. My mother, Juliana Ama, had the vision to create, with the commemoration project, a space where our community could express our own version of 1932. Supporting that effort was our first concern.

A key point in publicly recognizing what happened in 1932 as genocide was to perform a commemoration at the largest mass grave, which is in Izalco and called “El Llanito.” Izalco’s citizens know the mass graves are located inside their city, but prior to the start of the commemoration project, nobody was discussing them publically. In my opinion, the main reason for their silence was a lingering fear of the genocide and the subsequent repression. “El Llanito” is located at a strategic point in Izalco that also contains the ruins of a historic building. It is on private property owned by the Catholic Church. In the beginning, this church supported the commemoration project, but in the past four years, we have had some barriers in getting the permission from the owner.

Despite obstacles, the commemoration project has been taking place for eleven consecutive years, and “El Llanito” has been the main gathering point for our indigenous community each year. In 2012, the cultural institution of the Salvador government made a document in order to protect the place. “El Llanito” is now on the list of the cultural heritage sites of El Salvador.

The commemoration project is performed in January each year, and takes place over three days. My grandfather was one of the first survivors to express his testimony at the annual commemoration of genocide. Highlights of the program include the performance of ancestral ceremonies, testimonies of survivors, and MUPI’s exhibitions. As the years go on, fewer and fewer survivors are still living to share their memories.

The project has brought back a collective memory of the tragic event. Other indigenous communities located around Izalco, who suffered genocide in their communities, have started to organize similar commemorative projects. Our indigenous people located in El Salvador are now receiving attention from scholars, human rights activist, researchers, government institutions, and members of the Salvadorian diaspora in the United States. Our sense of belonging has increased in El Salvador.

On July 14, 2014, something I had never expected happened. The congress of El Salvador changed an article of our constitution. The article recognized indigenous people.

With or without constitutional recognition, our indigenous community is an everlasting element and resilient community. Given our years of work and the government’s validation, our indigenous people now have more opportunities to start important discussions about our history in order to achieve our other goals.

For example, in 2007, El Salvador’s national census stated that 0.2% of the country’s 6,279,783 residents were indigenous. We are contesting this claim. In 2003, few organizations, including a government institution collaborated on a document indicating that 10% to 12% of the population was indigenous. This percentage was not corroborated.

Also, though many people are of indigenous blood in El Salvador, our native language is dying. The most recent unofficial data indicates that there are approximately 200 indigenous who are native speakers. My mother and few organizations have been working for the revitalization our language, by teaching it to young people. Our community is resilient.

Another positive effect of commemoration project is that Salvadorian society is now using the correct word to describe 1932: Genocide. Previously, and sometimes even today, people use the words “events,” “acts,” and “massacre.” These words minimize the genocide against our ancestors.

In terms of the actions of the indigenous population in 1932, professors, researchers, and writers have often described their role as “insurrection” or “rebellion.” My mother Juliana Ama has a different way to describe what happened. She wrote:

“On January 22, 1932, our grandparents made legitimate use of their defense rights. When someone tries to destroy our community, we can use our rights. Also, no one can revolt on their own lands; 1932 was a just a recovery attempt of our stolen lands.”

Our next goal is to work with many people in El Salvador — from local government, the indigenous community, Catholic Church, universities, cultural institutions — to achieve a sustainable indigenous community, which includes: revitalizing our language, making a memorial site and museum, and offering intercultural education. We should develop a local legal framework for our community, an international agreement, and an economic development plan. And I propose a sensitive issue: reclaiming the land.

Post by Tito Chile Ama, an architect in El Salvador and recent Humphrey Fellow at the MIT School of Architecture + Planning.

Carlos Enrique Cortez translated this article into Nahuat, the indigenous language spoken by the author and his community. Nahuat is in the revitalizing process. Jorge Lemus Ph.D., a Linguist at Don Bosco University, has led a project to revitalize the Nahuat language since 2003. He and Cortez, a native speaker from Santo Domingo de Guzman, Sonsonate, El Salvador, are collaborators in the effort to increase Nahuat speakers.