Posted September 11th 2014 at 8:56 am by Lori Peek
in People Matter: The Human Impacts of Planned Redevelopment

Disasters Fast and Slow: Grieving for a Lost Home 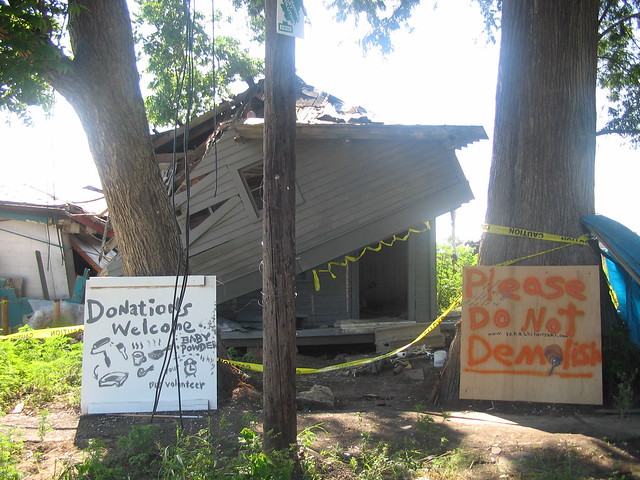 Those of us working in the world of disaster research tend to differentiate between “rapid-onset” and “slow-onset” disasters. The former tend to arrive quickly, often with little or no warning. Hazards like earthquakes, hurricanes, tornadoes, flash floods, and tsunamis are usually included in the rapid-onset category. The latter are more creeping and subtle in the ways that alter the environments where people live and work. Drought, desertification, sea level rise, and other forms of environmental degradation thus often fall into the slow-onset category. Regardless of their speed of onset, what these events share in common is that they may cause death and injury, damage and destruction to the built and natural environments, and short- as well as longer-term personal and community disruption.(1)

While social scientists who study disasters typically focus on large-scale events such as those listed above, I was reminded when re-reading Marc Fried’s seminal essay, “Grieving for a Lost Home: Psychological Costs of Relocation,” of how much we in the disaster field have to learn from—and to share with—those who are examining issues of urban redevelopment. This is perhaps especially true for researchers concerned with issues of population displacement in the aftermath of disaster.(2) No event in modern U.S. history has been more destructive and disruptive in that regard than Hurricane Katrina.

It has been just over nine years since Katrina made landfall. That storm devastated more than 90,000 square miles of the U.S. Gulf Coast and, when the levee system failed, flooded the city of New Orleans. Katrina ultimately forced the evacuation of an estimated 1.5 million people from coastal areas and led to what has now become a permanent dislocation of tens of thousands of U.S. residents. Some 2.5 million homes, 10,000 businesses, and 150 schools sustained substantial damage or were totally destroyed.

Following that terrible storm, I had the opportunity to collaborate with a team of academics who spent several years chronicling the evacuation and resettlement process for Katrina survivors.(3) Taken together, we conducted 767 interviews—562 with children and adults displaced by Katrina and scattered across the southern and central U.S.; 104 with first responders, disaster aid  providers, and community organizers; and 101 with residents in the communities that received the disaster evacuees. There are many parallels between what we found and presented in our book, Displaced: Life in the Katrina Diaspora,(4) and Fried’s seminal work on forcibly relocated residents from the West End of Boston.(5) For example, when writing about the effects of that relocation on the former West End residents, Fried observed:

“There are wide variations in the success of post-relocation adjustment and considerable variability in the depth and quality of the loss experience. But for the majority it seems quite precise to speak of their reactions as expressions of grief. These are manifest in the feelings of painful loss, the continued longing, the general depressive tone, frequent symptoms of psychological or social or somatic distress, the active work required in adapting to the altered situation, the sense of helplessness, the occasional expressions of both direct and displaced anger, and the tendencies to idealize the lost place” (pp. 359-360).

Fried’s account, published over five decades ago, of the struggles of those residents who were forcibly relocated closely resembles what many researchers documented after Katrina. Even a brief accounting of some of those studies gives a sense of how much emotional damage Katrina wrought: The American Red Cross reported well over one million “mental health contacts” with Katrina survivors in the months following the storm. A study of evacuees who ended up in a large mass shelter in Texas showed that 62% of the adults were suffering from acute stress disorder.(6) One representative study of 1,077 displaced or greatly affected households in Louisiana and Mississippi showed that more than half of the adult cohort was still reporting significant mental health distress more than two years after the disaster(7) and almost half of the children in Louisiana who survived Katrina suffered from serious and ongoing mental health issues for years after the storm.(8) Officials in New Orleans also reported that drug-related deaths and suicides increased among youth and adults as a consequence of the disaster.(9)

Grief was the term that Marc Fried used 50 years ago. Today, social scientists, mental health researchers, and others who study the emotional consequences of disaster are more likely to speak of and to measure things like acute stress disorder, post traumatic stress disorder, and depression. While the way we name, categorize, and measure these phenomenon may shift, the words that survivors of traumatic displacement use sometimes cut right to the heart of what it all means. One Katrina survivor in Austin put it this way:

And another person displaced by Katrina told us:

“I was kind of a little shaken up because this was all new to me. We were on a bus and tears just began to run out of my eyes because I was going to an unfamiliar place that I have never been.”

How do we begin to think about conceptualizing and measuring the impacts of displacement—whether due to redevelopment, slow-onset disaster, rapid-onset disaster, or something else altogether? How do we understand what this kind of shock may do to people’s health and their livelihood, culture, and sense of identity? A few thoughts, as we look back to honor Fried’s work and to move forward with our scholarship and efforts to improve life circumstances:

To truly understand what “grieving for a lost home” looks like, feels like, and actually does to individuals, households, and even entire communities, we must rely upon and value multiple approaches. It is only appropriate from a methodological, and a humanistic, sense.

(1) For an excellent discussion of how “disaster” has been defined, classified, and conceptualized over time and across different contexts, see: Quarantelli, E. L., ed. 1998. What is a Disaster? Perspectives on the Question. New York: Routledge.

(2) For a comprehensive statement on this issue, see: Esnard, Ann-Margaret and Alka Sapat. 2014. Displaced by Disaster: Recovery and Resilience in a Globalizing World. New York: Routledge.

Lori Peek is an associate professor in the Department of Sociology and co-director of the Center for Disaster and Risk Analysis (CDRA) at Colorado State University (CSU). She also is an adjunct research scientist at the National Center for Disaster Preparedness, the Earth Institute, Columbia University.