Posted December 4th 2015 at 11:04 am by Thomas Bergeron
in Discovery Walks

Discovery Walks: Symphony at the Sea 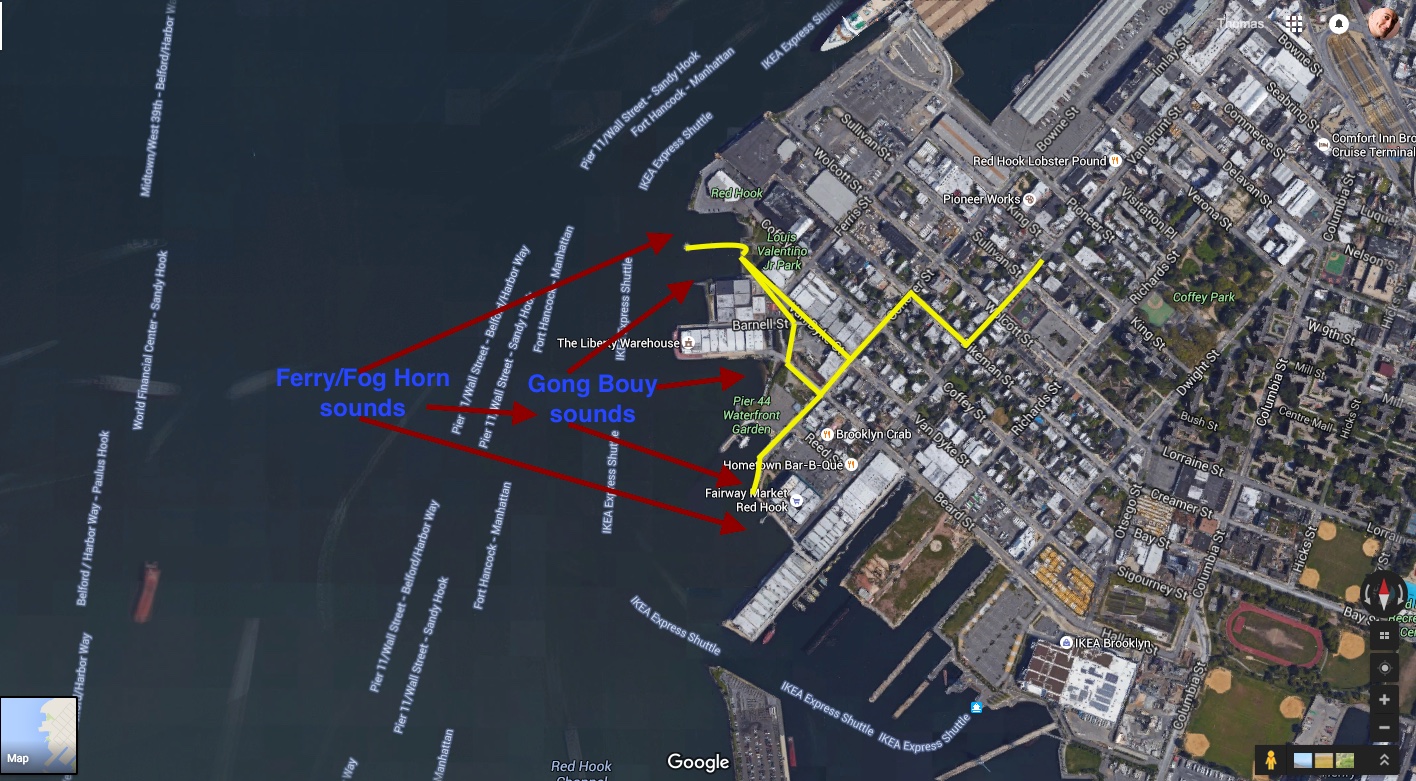 My wife and I decided to take a reminiscent walk around our old stomping ground, Red Hook, Brooklyn, over Thanksgiving weekend.  After some authentic spicy Kao Soy at our favorite Thai restaurant (the owner was so happy to see us that she didn’t let us pay for dinner), we decided to head to the site of our first date, Sunny’s Bar.  We had just caught wind that the same musician who was playing on our first date (the great Smokey Hormel) was playing that evening.  However, out of habit, we first stopped at the beautiful Valentino Pier, which is the closest spot on mainland New York City to the Statue of Liberty, and the only place where you can see her front view. At the park, we noticed a new sign at the foot of the pier with some information and images about the early days of Red Hook, when it was the busiest shipping port in the country.  We had no idea!  We also read about the pivotal Battle of Brooklyn during the Revolutionary War, which was apparently centered in Red Hook. It’s ironic how, after living in the neighborhood for years, only after leaving did we learn about its rich history.  We are happy that the city is putting up these informational plaques and sign-posts.  We are huge fans of the podcast 99% Invisible, hosted by the design luminary Roman Mars, who’s motto is “Always Read The Plaque”.  We’re glad we did.

As we headed toward Sunny’s Bar to hear the music of our beloved Smokey, we were lured elsewhere by a different, mysterious music coming from the darkness of the sea.  Out in the harbor we heard what sounded like Tibeten prayer bells mixed with low French horns.  We found ourselves sitting for a long time on a bench alongside the water, listening to a free concert played by the surprisingly beautiful music of the harbor.  Boat and shipping traffic continues through the night in this busy NY harbor. Because the sea lanes do not have the vibrant lighting system of the city streets, ship captains must rely on sound to navigate, making sure they don’t collide with other vessels or sail through shallow water.  There are “bell bouys” and “gong bouys” throughout the harbor, and ships must sound their horn whenever passing closely by another ship.  Because the surface of the water carries sound so effectively, anyone on the shore of Red Hook or Staten Island is treated to a symphony of safety sounds, courtesy of New York’s busy shipping lanes.  For this symphony, Red Hook Pier is the best seat in the house! (See video below)

Post, images, and video by Thomas Bergeron, a trumpeter, composer, producer, and educator in the classical and jazz music worlds. Check out his music here, or follow him on twitter: @tbergeronmusic