Posted August 4th 2015 at 11:36 am by Jason Spicer and Lily Steponaitis
in Banking On Values in Action

This is part of a series of blog posts by Jason Spicer and Lily Steponaitis, who are both conducting research on values-based banking in association with the work of the 2015-2016 class of Mel King Fellows. 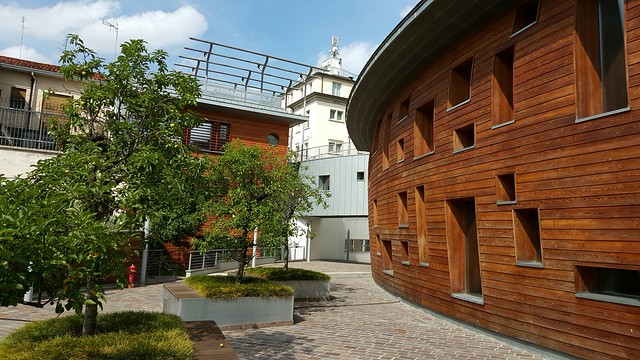 Banca Etica, which translates to Ethical Bank in Italian, certainly lives up to its name. Though only 15 years old, it holds roughly $3 billion in total assets under management and has quickly become an international bank, with branches in most of Italy’s 20 regions as well as in the Basque region of Spain. A member of the Global Alliance for Banking on Values (GABV), Banca Etica is a cooperative that strives to be Italy’s bank for the “third sector”; it serves non-profit organizations, cooperatives, social enterprises, and individuals.

In a country like Italy, where many banks and enterprises boast a long and rich history, Banca Etica’s newness makes it something of an unusual upstart. The fact that it is a cooperative, however, is not unusual. Many of Italy’s largest businesses are cooperatives. These include COOP, the country’s primary supermarket chain, and many of the largest insurers, construction companies, and banks—several with more than $50B in assets.

Given the long history of cooperative businesses and banks in Italy, you might ask: why was there a need to start a new, ethical bank? What we learned, while spending a week with the bank in their Padua and Milan offices, is that cooperative status does not always equate to ethical and democratic practices.

During our visit, we learned that cooperatives, just like other businesses in Italy, have been caught in a host of corruption scandals over the years. Some have involved the mafia, others have not. The most recent scandal, which unfolded last year in Rome, involved cooperative social enterprises paying off politicians to win overpriced public works contracts. These types of problems may surprise some people, especially anyone who assumes that member-owned and controlled cooperatives are likely to be fairer and behave more conscionably than traditional businesses. But, the Italian economy serves as an example of how a large and successful cooperative sector can have many of the same problems as traditional businesses, engaging in practices which are fraudulent, undemocratic, and greedy.

Given the presence of corruption in the Italian cooperative economy, Banca Etica knows that being member-owned isn’t enough to ensure that it is truly an ethical bank. Accordingly, the bank deploys a host of unconventional processes and policies to ensure that it remains transparent, honest, and true to serving the needs of its members and society. These policies include capping the salary of its highest-paid employee at six times that of its lowest employee; refusing to make consumer loans for luxury cars or second homes; refusing to invest in the debt of governments, like the USA, where the death penalty is legal; and powering its headquarters entirely by on-site solar panels. Banca Etica’s dedication to sustainable and equitable practices is evident throughout its entire supply chain and in relationships with its seven types of stakeholders (collaborators, customers, members, financial institutions, suppliers, community, and the environment). It releases all of the details about its business practices online.

These types of practices have been present from the beginning, in part reflecting the bank’s unique creation story. Before “crowdfunding” even existed as a term, Banca Etica was effectively crowdfunded into existence by almost 10,000 individuals and third-sector organizations. Each invested as little as $50 in the initial round of capital raised to open the bank.

Among Banca Etica’s host of unique practices, in our view the most powerful is the bank’s participatory, bottom-up, credit evaluation process. When an organization requests a new loan, the bank deploys one of its 150 trained volunteer members to conduct a detailed social and environmental evaluation of both the borrower and the specific project. This is a time-consuming two to four week process and is conducted in tandem with the loan officer’s financial evaluation of the borrower and loan application.

As part of their evaluation, the volunteers conduct in-person interviews with the borrower. These include detailed data disclosures and analysis on pay-equality, ownership structure, clients, energy sources, gender discrimination, and any potential links to the mafia or the weapons/defense industry. The volunteers submit a written report to their locally elected council of bank members (called the GIT) for review. A negative report usually results in the bank’s refusal to make the loan.

These bank volunteers – we met with two of them – are not finance professionals, and that’s precisely the point. If a borrower can’t show the bank’s members how their loan will be used, and how that purpose matches the mission of the bank and the ethics of its members, then perhaps the bank shouldn’t be making the loan.

Banca Etica’s approach to banking is refreshing in its transparency and straightforwardness. Banking should be simple, and should serve the needs of society, as reflected in the bank’s motto: L’interesse più alto è quello di tutti. Translated, this means: the highest interest is everyone’s interest. We agree.