Posted January 13th 2015 at 12:46 am by Sumiya Tarannum
in The Story Behind a Question: Using Storytelling to Further Community Engagement

How do you tell a good story? 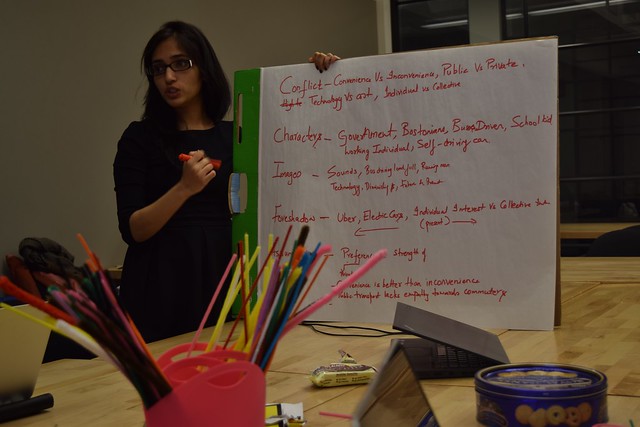 Day four of The Story Behind a Question workshop was focused on exploring storytelling frameworks and tools to generate imaginative and creative thinking for our stories. Telling good stories is not as always a straightforward process so this session gave us some tools for thinking about how to approach this.

We began by reflecting on insights from behavioral economics expert and Nobel Laureate Daniel Kahneman’s talk on understanding the differences between our “experiencing selves” and our “remembering selves.” Our mind is tuned to remember only the changes, significant moments and endings in the process of experiencing an episode or life event. As a result, the brain only stores the emotions that are felt at the peaks and ending of a story. The length of time an experience takes has zero relevance in creating the memory of that episode. Because this applies to storytelling as well, Daniel’s insights got us thinking about the importance of how our stories are framed and end. This segued us into an exercise from the Center for Story Based Strategy. In this exercise, led by one of CSS’ affiliates and a co-founder of Intelligent Mischief, Terry Marshall, we explored the 5 elements of a story (as CSS defines it) and the important tension and difference between truth and meaning.

Truth Vs Meaning and Elements of a Story

The above spaghetti tree hoax video was broadcasted by the BBC in the UK on April Fool’s Day in 1957. Terry used it to point out the difference between truth and meaning. The video shows families in the southern part of Switzerland harvesting spaghetti from fictitious spaghetti trees. This piece demonstrates how the use of BBC, a credible platform, can make viewers think of the information being presented as credible and realistic. Moreover, the technique of using black and white footage and British families as actors suggests a certain legitimacy to the broadcast. Before we realized it was an April Fool’s Day joke, we were a bit confused, almost to the point of believing the video was true. When the video initially aired, BBC got dozens of questions from viewers about where to locate spaghetti trees. This video launched us into discussing the idea that the power of framing is in meaning, not necessarily in truth. Giving people facts won’t necessarily convince them of a story or a position or even make them believe you. What you choose to show or tell, what is in the frame, is how people make meaning behind a story or narrative. People read meaning into the spaghetti video, leading some to think, even if for a moment, that the spaghetti tree was a factual thing.

Next we talked about Star Wars. Through dissecting this movie we saw how the 5 elements of a story: conflict, imagery, foreshadowing, characters, and assumptions, are used to effectively tell a story and/or shape a narrative. We used these elements to work through our own story creation process by spending time with partners identifying these elements in the stories we are working on.

What Makes a Good Story?

In our final hour we zoomed back out and focused our energy on thinking about what makes a good story. We listened to an audio story narrated by a young woman from Rhode Island, Cristel, on the three years she spent incarcerated for committing a horrifying crime as a juvenile: slitting a 13 year old girl’s face with a razor. The audio story used sounds from her experience and vivid descriptions to make her story moving and powerful. We discussed the various techniques used, the framing, what was most effective and what didn’t work.

By the end of the session, I was surprised to realize that we had already begun prototyping our stories during the session and had some tools for thinking about what to do next. That was incredible given the overwhelming feeling I had when starting off with just the question I was interested in digging into!