Posted January 7th 2015 at 5:00 pm by Sumiya Tarannum
in The Story Behind a Question: Using Storytelling to Further Community Engagement

Getting Started with the Story Behind A Question

The Story Behind a Question workshop is underway. By the end of the 8-day workshop we’ll be producing multimedia stories based on questions contributed to the City of Boston’s GoBoston2030 Question Campaign. Over the past two evenings, we’ve been introduced to the Question Campaign as a technique for community engagement within the context of Boston’s transportation visioning process.

Learning about the Question Campaign

The goal of the question campaign is to capture questions from people across the city on the most pressing and important transportation issues affecting their lives in order to envision what getting around Boston in the future could look like. This campaign is an attempt by the city to capture Bostonians’ voices and demonstrate a model of inclusive public engagement.

In our first session on Monday evening, Danielle Coates-Connor, Communications Director at the Interaction Institute of Social Change (ISSC) introduced us to the vision behind the campaign, the city’s process and the social media and in person plans for getting questions from community members. She explained that once the questions are contributed they will be sorted to identify key themes and a group of community members will prioritize the various questions and concerns raised and decide what will be in the transportation plan. Danielle stressed transparency and accountability as key focuses of the campaign because in the past there have been incidents where the public has been disappointed by the outcomes of community engagement processes. She also emphasized that gathering the voices of marginalized populations and affirming that their voices matter is an important goal of the campaign.

I’m curious to watch and see whether the process Danielle described, wherein community leaders will filter and distill the questions contributed to the campaign into key themes for the transportation vision plan, will capture the true needs and wants of Bostonians. 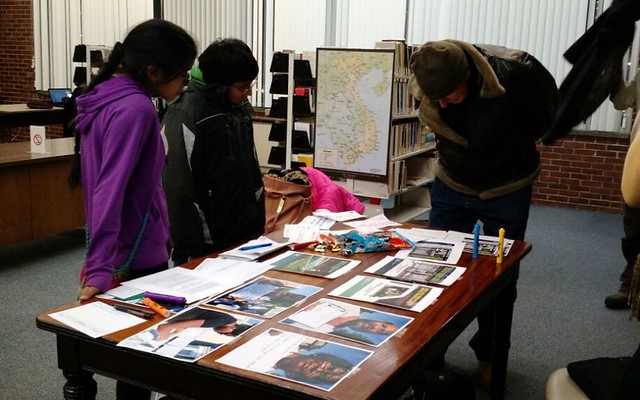 On the second evening of our workshop we engaged in question collection at Fields Corner Library and T station to get some hands on exposure to the Campaign and today a couple of us collected questions on MIT’s Campus. We used posters with some of the questions that have been contributed so far and blank question cards to initiate conversations with people. In preparation for our next step, where we’ll work to produce media that tells the story behind some of the contributed questions, during or after someone shared their questions we had conversations about the experiences that compelled them to donate said question. As people shared these stories and their questions we noticed a number of things.

We encountered a diverse mix of people varying in age, race and working backgrounds when collection questions at both Fields Corner and MIT. People contributing questions ranged from children, to young adults to senior citizens. We initially had a few difficulties in getting people to contribute questions but over time we refined our approach and made adjustments. 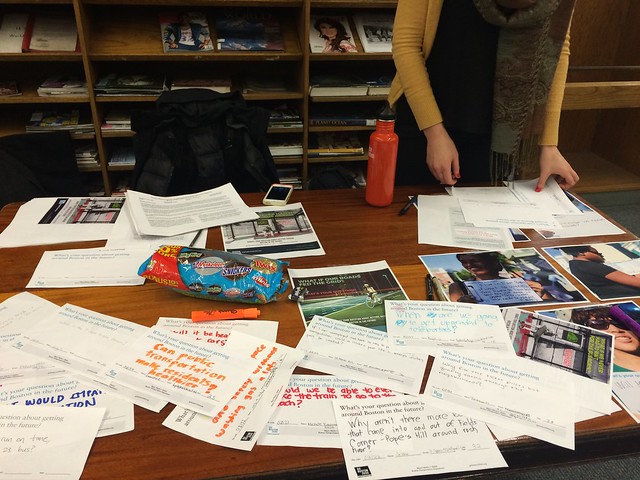 Some questions contributed in Fields Corner

A lot of questions people submitted were around cost, timeliness, frequency, capacity and access to transportation options.

A few others asked questions about the lack of connections between transportation routes and safely getting around the city at night.

There were interesting contrasts & similarities between the questions submitted by people at MIT and at Fields Corner. People at both locations primarily asked questions about timeliness, reliability and accessibility of using various transportation systems in the City. It was clear that many of their questions were articulating their desires and wishes for the future.

One key difference we noticed was that the Field’s Corner contributors emphasized the tension between increasing cost and inconsistency in quality on the MBTA. For example, one person mentioned that though the ticket prices rose each year a similar trend was not observed in bettering the experience; she went on to discuss how some buses in certain neighborhood had heating fans while others had none. On the other hand, some of MIT folks who contributed questions were focused on getting reliable apps and card system to make the experience of getting around Boston smoother. Finally, we didn’t notice as much skepticism amongst MIT participants (mostly students), as we did with the Fields’s Corner question contributors. 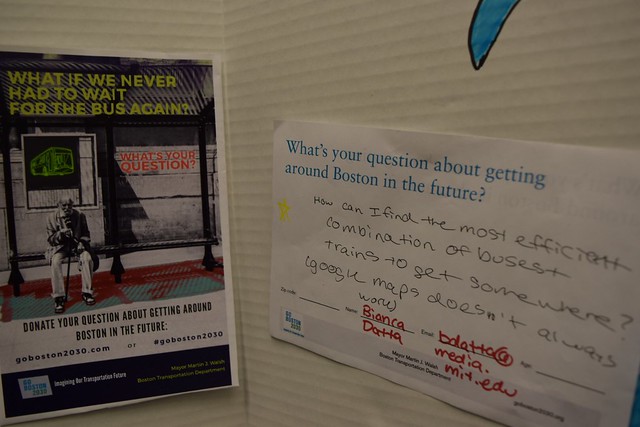 A question from an MIT student

For the rest of the workshop, we will continue to explore questioning as a tool for community engagement and delve deeper into the stories behind people’s questions. Stay tuned for more on what we are learning and our media pieces on the stories behind some of the questions people contributed!