Healing as a Collective Process 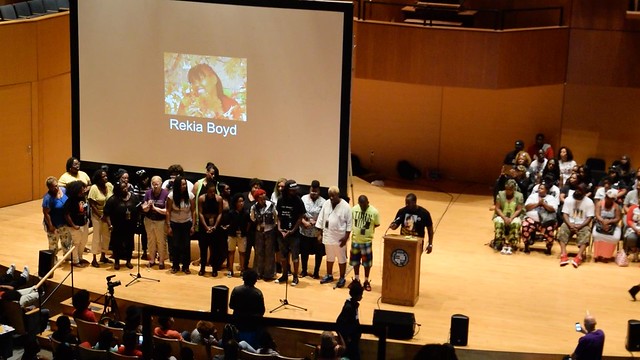 Police and state sanctioned violence towards Black people in America is not new. But, the past two years have brought it into sharper focus as incidents are increasingly captured on video, spread through social media and become rallying points for direct action and change. Knowing the stories of victims and watching sometimes gruesome videos have been critical for galvanizing the ongoing #BlackLivesMatter movement and the incremental wins that we have begun to witness.

But, these same tools can also often leave me as a Black woman emotionally exhausted, and often times scared and anxious. I’ve screamed, cried and protested over the realization that India Clarke, Sandra Bland and Rekia Boyd all could have been me. So sometimes I find myself trying to avoid the trauma, the anxiety and fear by ducking and weaving in and out of #BlackLivesMatter movement spaces, taking social media breaks, and sometimes altogether avoiding conversations about state and police violence.

Feeling an extra emotional fortitude last week, and knowing that an explicit intention of the Movement for Black Lives Convening was to create spaces for Black people to begin to heal from the many traumas we face, I decided to attend this past weekend’s gathering at Cleveland State University in Ohio. I’m glad I did, because there was a palpable sense of love and healing on that campus.

The Convening was intentionally an all Black space. Underlying this decision was a key guiding principle: the most directly affected people are experts at their own lives and should be at the center of the movement. There is something about being in a space where you know everyone intrinsically gets your pain and has experienced some version of it that is inherently comforting and healing. The work of explaining and of articulating your grief and trauma isn’t required. It is easier to feel your feelings and trust that others are standing with you, sharing your pain.

On the first night of the Convening, a powerful emotional space was created when the families of about a dozen victims of police violence grounded their continued activism in the humanity of their slain loved ones. We heard from Tamir Rice’s mother about how he loved to play video games. Rekia Boyd’s brother chuckled as he recalled that she would belt out Keyshia Cole’s Love, her favorite song, sometimes just to annoy him. And, Mike Brown Sr. shared that his son loved the color blue. Each introduction ended with, “And, this is why we fight.” In between clapping and cheers, the next family was welcomed on the stage with a sweet melody from the Black Lives Matter choir:

Through my own tears I could vaguely make out the scene around me. Everyone I could see was crying. Our tears seemed to be an expression of our awe of the courage of the family members we’d heard from and in recollection of the traumas our own families have experienced. Holding hands with those around us and hugging each other tightly we joined the chorus in singing, before chanting the Assata Shakur quote that has come to be central to the Black Lives Matter movement:

Finally, we exited the space by dancing to Kendrick Lamar’s Alright, with the refrain:

I left the space that night feeling a deep sense of gratitude to the families who still fight even in the midst of delayed justice. Buoyed by the strength, commitment and life-saving hope contained in that auditorium, the collective healing process began to do a work in me that night.