Posted November 2nd 2016 at 11:52 am by Insiyah Mohammad Bergeron
in PAR in Boston, Participatory Action Research

Health and Development in Dorchester: Research by and for Residents

Carl and Arnetta Baty are Resident Researchers with the Healthy Neighborhoods Participatory Action Research Study Team, led by Prof. Mariana Arcaya. CoLab is collaborating with teams of Resident Researchers in nine communities across Boston to design and carry out research that examines the relationship between community health and urban development. This is part of an effort to ensure that future development in communities like Dorchester, where Carl and Arnetta live, contributes to the health and wellbeing of all residents.

Carl and Arnetta graciously invited CoLab Radio’s Insiyah Mohammad Bergeron to their home for this interview. 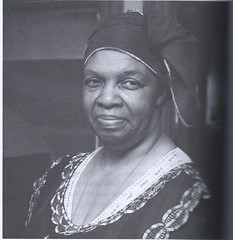 Insiyah: Can you describe your relationship to this neighborhood? How long have you lived here?

Arnetta: I moved here in 1994, just about 22 years ago. At the time that I moved here I was running a family child care business and became veryinvolved with the resources that were available to the families of the children that I looked after. When I retired in 2012 I continued being connected to the neighborhood, but now my focus is on seniors.

Carl: I didn’t get here till 2011. I was in Baltimore most recently. I was born and raised in Philadelphia, but the city didn’t want me. I was on a three-year probation; my probation officer told me that I wouldn’t stay out of jail in Philadelphia. She told me to go to Baltimore and never come back.  Going through homelessness, and coming out of homelessness and addiction I wanted to do something to help those that were on that track. So my buddy Jerry and I had the idea to start a formal organization to do more. We started Rounding the Bases, a small organization focused on recovery. I met Arnetta online. At that point in my life I didn’t know clean street people. I asked her to be the board chair and she agreed. We started traveling back and forth to meet each other. I actually came up here to take her back to Baltimore, but I ended up getting 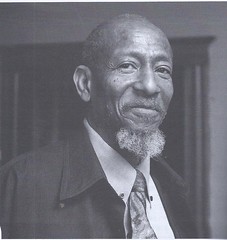 work here and it didn’t make sense to take her back to a question mark. So we moved the business up here. I arrived here in time for father’s day in 2011, and we got married two months later.

Insiyah: What are some of the changes you have observed in the neighborhood since you moved here, especially in relation to health?

Arnetta: When I moved here in 1994, the neighborhood association was mostly concerned with home ownership. They had a say in who bought a home, and what types of businesses or people were in the neighborhood. They wanted to make sure that owners occupied homes and people weren’t just buying property for investment. When I bought my home, I had to live here at least five years before I could move on and rent my place. I liked the neighborhood but there were some issues. For instance, it seemed that the renters didn’t really take a stake in the neighborhood. There were always new people coming in. And drugs were bad, but not as bad as they are today. Recently mostly investors are coming in and buying up properties. The neighborhood association is trying to go back to how things were in 1994, where it had a say in who buys and rents property.

Besides substance abuse, there are some other health problems that have gotten better, but only for people who have knowledge. There is no program to assist you, and that’s one of the things that I became passionate about. I wanted to assist seniors in knowing about the resources available in our neighborhoods. We started a weekly coffee hour at the Codman Square library to let seniors and families know what resources were available to them. We also collaborated with the City of Boston’s Tech Goes Home program to provide a computer class for seniors. Many of them have trouble getting around and feel isolated at home. The Internet helps them connect with the outside world.

Carl: If you look at dietary and stress related illnesses, you’ll find that they’re worse in the neighborhood, like hypertension, or cholesterol. Good food is not cheap. If you have financial issues, you only get what you can afford, especially if you don’t know where to get good food cheaply. Dietary and stress related problems will only get worse if we don’t educate people about these things.

Insiyah: How is this research project different from others that you may have been involved in?

Carl: All the previous research that I was involved in dealt with addiction. The researchers always had specific questions in mind. They brought people in to ask those questions, not having a clue as to what addiction is. I always felt that they didn’t really want to know about me as a person; all they wanted to do was gather some data that I never heard about again. They gave us a couple of dollars for participating. But if you think about this, bringing in a junkie and giving him a few dollars… yes he will take it, and yes you will get the data, but all you did was throw fuel on the fire. Nobody wants to hear this criticism.

What makes this group different? This group will hear that. No, I don’t know all the answers but I will raise the questions that I have always had. And this group will listen. This is a diverse group and people are bringing very different experiences to the table, but all of us are relevant.

If the goal is to gather data, then it is important to question what do we do with the data and how do all the people who are sitting in the room benefit from it. There is a lot of healing that is happening through sitting in that room with the group. I’m the guy who was told, “You will never see your 18th birthday, and if you do you’ll see it from a jail cell”. I beat those odds, and I’m 64 years old but still, nobody wanted to hear what I had to say. I did everything you said I would never do, but because of who I am, you still don’t want to hear what I gotta say. For the first time in my life, I have people who hear what I have to say. That’s healing. Healing happens if we take the time to do it.

Insiyah: How does the process of conducting surveys affect the way you relate to your neighbors?

Arnetta: We do the surveys at the weekly coffee hour. We combine it with something that is already going on that is of interest to the seniors. A lot of seniors don’t have family visiting them on a regular basis. They don’t know who to reach out to when they’re sick. Initially we started the coffee hour for seniors to have something to do one day a week, and then we thought we can do more.

The survey gives me an opportunity to pass on a lot of information about what’s going on in the neighborhood. It is helping respondents think about the demographics in their community, for instance, how many other nationalities are in that neighborhood that they may not have thought about before. It also gives them a chance to write down any concerns or comments that they have on the back.  We are collecting a lot of information about the kinds of services that people need in the neighborhood. 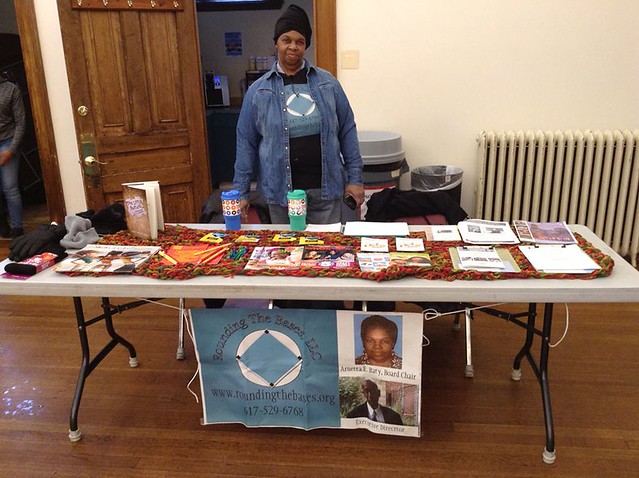 Arnetta representing Rounding the Basis at a community event

Insiyah: What would research look like ideally in your community?

Arnetta: I know it needs to continue, I believe surveys need to be done on a monthly basis because our needs change month to month.

Carl: There is a ton of data that we have collected through this project and the question is what are we going to do with it? What does it really mean? What do we want to find out from this?

It is important to know the context before interpreting the data. I’ll give you an example. Mama (a senior that Carl and Arnetta have adopted as a parent) has a machine that checks her vitals everyday. She gets up in the morning one day and finds that her blood pressure is 189 over 100. The doctor looks at it and says, “Wow that’s high”. Knowing her situation we ask, “Mama have you taken your blood pressure medicine today?” She takes her medicine, and her blood pressure drops to 150 over 84. If all you’re looking at is the data, you can be immediately alarmed, but is crucial to understand the full picture. This is why it is important for people who are part of the community to be intimately involved with every step of the research process.

Insiyah: Are there any challenges to doing research in your own community?

Carl: The hardest thing is figuring out who we are working for and what we should do with the information we collect. A lot of people have some bad ideas about doing research, and respondents never see the results. And nothing changes. We’ve just got another study! Figuring out the next steps is an ongoing challenge for us.

Insiyah: What are your general reflections on the research process so far?

Carl: The best thing about this way of doing research is that everyone is a person in this group. I don’t want to be a guy that gets paid $15/hour to go out and do something. You can get a monkey to pass out a piece of paper and a pen.  When I ask a question in this group, nobody gets upset. Nobody says it’s time for you to go.

Arnetta: Just reading some of the surveys that we have done, it’s interesting to see that a lot of people think the same way, no matter what nationality they are, about the neighborhood, the services that are available, the people that live around them. And it is also interesting to note that some people don’t really know who lives around them at all. Some of them get up, go to work, eat dinner, and go to bed. And do the same thing all over again the next day.

Carl: What we miss as people, is remembering that we are more alike than we are different. We all want and enjoy the same things. Opportunities are different. But people are people. You watch any parent with his kid- he’s going to protect that kid at all cost. When we see other people, all we see is the wrapping. And we convince ourselves that they are different. But when you take the wrapping off, we are very similar. We enjoy being reminded of this when we do this research.