Posted February 23rd 2017 at 8:58 am by Aisha Shillingford
in Alternative Futures 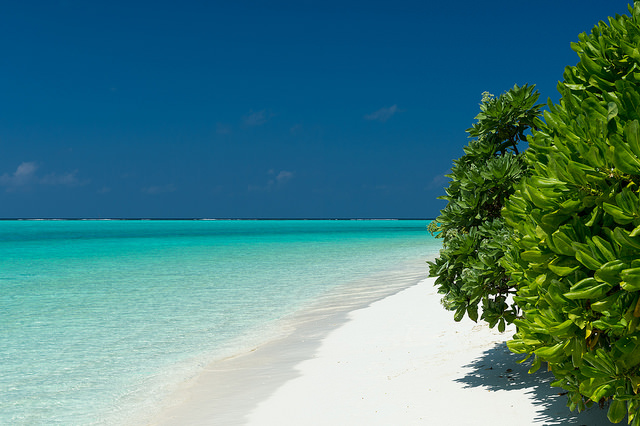 Ish’s eyes fluttered open only to quickly squint against the overhead sun. They stood up in the water and slowly walked back toward the sand and sat down. They breathed a sigh of contentment as the warm rays began to dry the droplets of salty sea water still rolling off their skin. This was their favorite thing to do as soon as they returned to Nation X after spending time in The Empire. They’d returned only the day before at dusk and couldn’t wait to head to the beach the next day. They wanted to pay homage to Yemaya, and to perform the necessary rituals. They were meant to symbolically wash away the hardship of being within The Empire but Ish believed in their heart of hearts that every time they dipped themself in the warm salt water that Yemaya truly was taking away the stress, the fear, and the paranoia they learned every time they made that long journey.

They stared at the microbursts in the distance and felt a surge of connection between Yemaya, the other citizens of Nation X and most importantly their comrades in The Agency. Ish had traveled to The Empire with Nuri Al-Hadi, Sankofa Yemaya, and Sadik X five times since Rift 1, when Trayvon was killed, and felt the bond between them all was strong. In fact they could sense the other agents elsewhere on Nation X but chose not to communicate. They wanted to respect people’s time with their families after their return and not interrupt with telepathic communication just yet. They would see each other soon during their debriefing at The Agency where they would be reporting back on the status of the Survival and Liberation activities they had been implementing within The Empire.

Ish’s thoughts turned to The Empire and their heart wrenched. They felt a flood of emotions thinking about the tremendous love they felt for the people there enduring such oppression and hardship but also a fierce solidarity with those fighting hard to implement the Survival and Liberation programs. Ish had been identified as an Empath during their first few years of Learning and by the time they entered the years of Meaning Making they were being closely guided by the Hurriyat, the community of Empaths that would teach Ish to hone their natural skills. Ish had learned to freely sense, feel, absorb, and express the widest possible range of human emotions. This made them an enormous asset as an Agent but it was something they would have to learn to curb when visiting The Empire.

The Empire… It was such a strange place. As an Empath Ish had felt a visceral reaction the first time they arrived there and connected with the Black Bodied. The mix of pain, joy, love, and faith was almost too much to bare, especially combined with the limited range of emotions they were allowed to express publicly. Ish couldn’t imagine feeling that much and not being able to open their mouth and wail, laugh, or sing as they felt inclined. They had grown up on Nation X and had always felt free. Always known what it was like to be amongst other Black Bodied who did as they pleased, said what they wanted, governed their society, lived in peace and security. Sometimes they wondered what life would have been like had they never been chosen for the Agency, or had declined the invitation and stayed on Nation X their whole life. But this thinking was futile. Ish was proud to be part of the long lineage of Agents whose role was to guide the Black Bodied within the Empire to freedom whether they remained in The Empire or fled to Nation X eventually. Specifically, Ish and their comrades had been tasked with ramping up Survival programming in the Empire. This had involved the creation of a new Survival Guide, providing Survival Trainings, opening a new satellite agency in the Northeast of the Empire, and bringing other Agents together to provide recommendations to the government of Nation X on next steps. This was particularly crucial given the recent rise in popularity of The Bruj@s.

The Bruj@s had galvanized while Ish was away. The Agency had thought they would eventually fade away but instead they were gaining momentum. As far as Ish could understand they were a collective of young femmes who believed that Nation X should be engaging in more direct and open confrontation with The Empire rather than relying on Agents to protect and guide The Black Bodied. In all honesty Ish thought they had a point. Nation X had been sending Agents for centuries and while the Black Bodied were surviving as a result, the question of liberation remained unresolved. It depended on how one defined liberation of course. Some Nation X philosophers believed liberation was a state of mind, others believed it was a physical reality combined with a mental state. The Bruj@s believed that regardless of the definition, that the Governing Council of Nation X was out of touch. They felt that philosophical discussions on Nation X about the nature of liberation were not based in the day to day reality of life in The Empire. The Bruj@s wanted to immediately liberate all The Black Bodied. Ish thought this was coming from a good place. A place of great solidarity and love. The Governing Council agreed but they were weighing this desire with the primary goal of maintaining Nation X as a secret location. They feared that direct state confrontation would compromise the security of Nation X and leave it vulnerable to The Empire’s attack.

Ish’s head was beginning to hurt. It wasn’t time to think about Nation X politics yet. They needed to focus on the rituals right now. They settled in to meditation, focusing on the microbursts in the distance. Their breath deepened and they reflected on the protection that Yemaya had provided by hiding Nation X behind the microbursts. They were happy to be home. To be free.