How to Traverse a Pedestrian Main Street

This is the third in a series of four posts on the impacts of pedestrianizing Bogotá’s Carrera Séptima. To learn more about pedestrian main streets, scroll through this global conversation on the topic.

In the following videos and map, you can feel the experience of each commuter, no matter his modality, on Bogotá’s recently pedestrianized Cra. Séptima. We are all travelers, whether by car, foot, bus, or wheelchair. To understand the overall context of the pedestrian, watch this video filmed with the Drone DJI (Phantom2), which shows a view from above the main street:

Aereo from Luis Miranda on Vimeo.

At each point on this map, find a video or interview of a commuter on Séptima — cyclist, wheelchair user, public bus rider, and pedestrian included. Note that these are in Spanish.

We (transportation engineering students at Universidad de los Andes in Bogotá, Colombia) wanted to capture the experience of each kind of commuter on the street, post-pedestrianization. We found that the city’s measure has had great success in pedestrians and bikers, as they can now enjoy greater public space and better quality of air. Those who travel by car or bus, however, say that their travel times have increased due to congestion on Cra. Séptima’s surrounding. They also noticed an increase in insecurity. 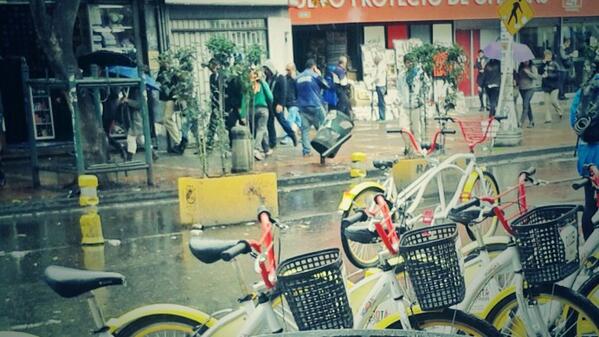 Pedestrianizing Cra. Séptima has been controversial, but perhaps holds the seeds of a more sustainable transport plan for the future.

See the street from a cyclist’s eyes:

Post by Jorge Anaya, Joaquín A. Franco, Gustavo A. Garzón and Luis Miranda.