If we listen, the Bronx will tell us what it knows

Before my internship at the Bronx Cooperative Development Initiative (BCDI), my experience in policy and planning primarily involved being concerned about the constraints on government budgets and being enthusiastic about creative public-private-nonprofit partnerships to promote community economic development.

So, I was initially nonplussed to learn that the Kingsbridge Armory Redevelopment Alliance community coalition had, in 2009, pressured the City Council to vote 45-to-1 against a proposal to redevelop the historic Kingsbridge Armory into a shopping mall complex. Then-mayor Michael Bloomberg called the vote “disappointing and irrational,” and he promised “one thing for sure: There will be no wages paid at all at the Kingsbridge Armory for the foreseeable future.” If the community would fight against a seemingly beneficial development project, then what do they want? What do they know?

If we listen, the Bronx will tell us what it knows. 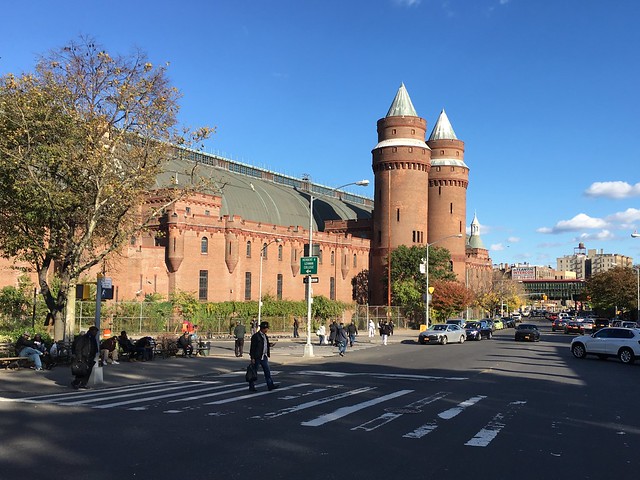 After starting my internship, I attended a community meeting in Parkchester where local activists were petitioning for postal banking. Bronxites recognize that unbanked individuals are susceptible to exploitation by check cashing establishments. They also appreciate that communities of color have reason to be distrustful of traditional financial institutions that have marginalized or exploited them for decades. The concepts and challenges I became aware of in the classroom were the lived experience of these community activists. Bronxites also recognized that a Kingsbridge plan that added 1,000 temporary construction jobs and 1,200 ‘permanent’ minimum wages jobs (which is what the City presented) did not match community need. They understood that it was a plan for extractive investment for the benefit of people who aren’t from the Bronx, and it was a plan that would exacerbate wealth inequality.

Instead of remaining perplexed, I spent the summer learning to appreciate that “participatory planning” must involve meaningful community ownership of the planning process; deep community engagement is a check-and-balance to ensure that public-private initiatives designed in City Hall have outputs that meaningfully benefit the community.

Over the summer, I attended an NYC Department of City Planning’s (DCP) open house for their Southern Boulevard Neighborhood Study, where they sought community feedback on their new designs for the neighborhood. A DCP employee, who assumed that I was a local resident, wanted to talk to me about how beautification plans would make certain streets more appealing to walk. I mentioned to another employee that I was a planning student, and he was excited to explain how new zoning and land use rules will make the area more attractive to outside investment. The shift in focus and energy between the narratives seemed almost like double-speak. DCP had prepared charts estimating the distribution of new affordable and market-rate housing units that might be built, should their plans be approved: affordable units would be made available at 80 percent of metro Area Median Income (AMI), which is approximately $75,000. It’s also between two and five times the household median income of census tracts in the study area. It struck me that a shift toward more progressive City politics and administration (from Bloomberg to de Blasio) does not assure a greater commitment to forthrightness or increased mindfulness of community need or planning that prioritized and protected the community.

I learned early in my graduate studies that the private market is rarely perfectly competitive or maximally efficient without government intervention; the market does not perform optimally of its own accord and the government has always brought its power to bear on the market. My research and training over the summer brought this into sharp relief. For decades, the City has used state power (subsidies, zoning laws, eminent domain) to overcome adverse market forces as it pursued a particular pattern of development and neglect throughout the five boroughs.

My first policy deep dive at BCDI involved taking a close look at the City’s tax expenditures and tax lien sales. Currently, the City’s greatest annual expenditure is the inefficient and counterproductive 421–a tax break which benefits private developers of condos and homebuyers who can afford to pay 120 percent of market price. Meanwhile, the City finds itself hard-pressed to develop housing that is deeply affordable at the level needed in neighborhoods where median incomes are a fraction of AMI. The City also continues to approve the Tax Lien Sale program through which they sell, at discount, the right to collect property debts to a private trust. As a student of policy who closely studies government budgeting and fiscal policy, I found it ironic that a city government with access to the country’s top professional talent could be so enthralled by the quick cash infusion from liens sales that it has become oblivious to the incredible opportunity cost giving up scarce vacant and underdeveloped properties in NYC’s hot housing market.

My next policy adventure at BCDI was exploring how to form and manage community land trusts (CLTs). I previously thought that the gold standard for safe and healthy housing should involve affordable homeownership with wraparound services, and the City has several programs promoting ownership. But 80 percent of Bronx residents are renters, a third of whom are severely rent burdened (people who pay more than 30 percent of their income for housing), and homeownership programs could not reach Bronxites with low levels of wealth. A CLT, however, would remove the real estate from the market and ensure permanent deep affordability to renters. The City has been slow to consider CLTs as a policy option,but creating a land bank and conveying property to community-based organizations is a key strategy for ameliorating the damage the government has done to the Bronx.

Another part of my internship was touring the “Undesign the Redline” exhibit at the NYC Health Department’s Bronx Neighborhood Health Action Center. The exhibit is about redlining and its present-day consequences for neighborhood racial composition and health outcomes. In 1935, the federal Home Owners’ Loan Corporation (HOLC) released color-coded maps of cities that gauged risk of mortgage lending in urban neighborhoods. The worst rated neighborhoods were marked in red, and marked so because of the “threat of infiltration of foreign-born, negro, or lower grade population.” This government policy was the foundation for residential segregation and disinvestment that has persisted in the Bronx: as of 2010, the differences in the level of racial segregation, homeownership rates, home values and credit scores still closely match to the boundaries HOLC had drawn 80 years ago.

What we see in the Bronx today is of government design; it is the trauma of intergenerational and explicitly anti-minority abuse by the government. Understanding what was done to the Bronx, and why, should infuriate every student of public policy and urban planning; knowing what policies and plans the government would have subjected me to in 1935 made me feel the state-sanctioned insult and injury more intensely, like the friction of a match head against the strike box.

The government has inflicted a tremendous amount of economic and social harm on the Bronx (and other poor communities of color) and no policy or plan can legitimately address today’s challenges without a participatory process that respects community knowledge and need. My experience at BCDI has renewed my commitment to advancing policies that raise the floor for all people, and has clarified for me that community-led efforts are essential for both resisting inequitable outcomes and also generating opportunities for building shared wealth.