Posted February 5th 2015 at 5:10 pm by Lillian Jacobson
in Drawing Outside the Lines: Community-Based Design in Unincorporated Communities

Imagining Ideals and Budgeting for Betterment

This is the third post in Drawing Outside the Lines: Community-Based Design in Unincorporated Communities, which chronicles a series of design workshops (“Visioning Sessions”) with high schoolers in an unincorporated area outside of Santa Rosa, California. Read the history of this community here. 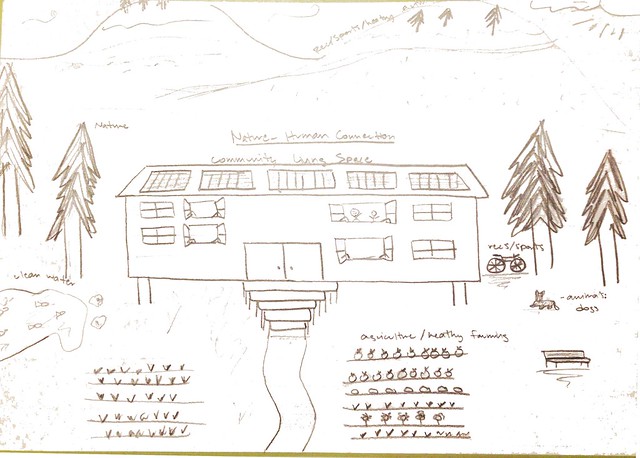 One student’s drawing of an ideal community

In this session, I wanted the students to first tap into their most creative ideas by imagining their perfect neighborhood, and then harness that creativity into realistic ideas through a budgeting game. To start things off, students drew their ideal communities. It took a little pushing for them to move beyond “practicality” and to think outside the box. But eventually, they started to draw ideas like teleportation devices instead of cars, rooftop pools on every house, and of course, universal free wifi. I was incredibly impressed by many students’ emphasis on environmental sustainability. One student explained that in her ideal community, everybody’s house would have solar panels, and energy would be pooled together to power a community theater. Another explained that the sidewalks and roads would be made of solar collectors, and all the homes would have green roofs and rainwater collection tubs (I kid you not). A third student explained that he wanted a community with a “human-nature connection,” communal living, and sustainable farming for healthy foods. My faith in the future of our environment has been restored knowing that these teenagers will soon be leading the country. 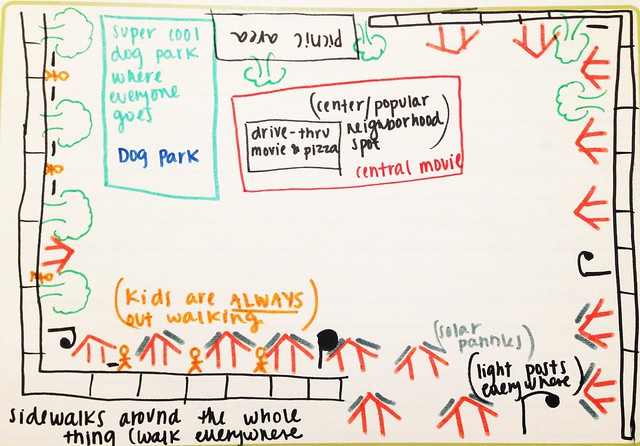 Budgeting for the Ideal Neighborhood

For the second half of the session, I divided the students into groups based on where they live. I gave each group a map of their neighborhood planning area, and cards with different price-point items on them; such as “bench,” “street lights,” etc.. These items each fit into one of six categories: businesses, design, community uses, parks/open space, infrastructure/pedestrian safety, and public safety. 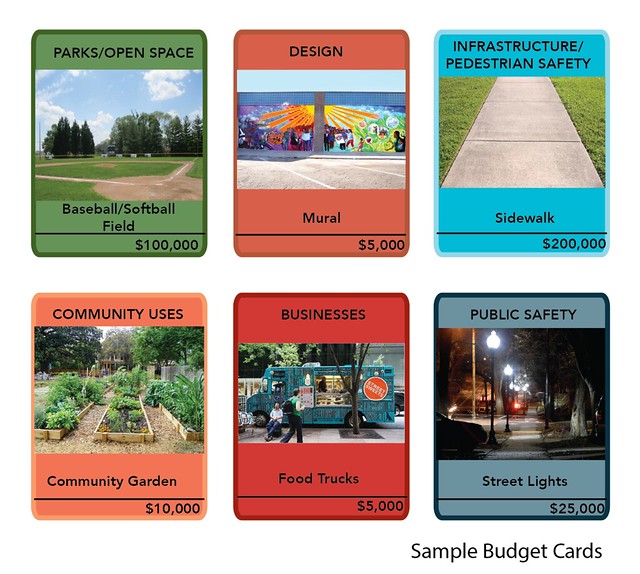 Each group was then given a budget of $1 million dollars, and as a team, they prioritized their top three planning categories, on which they were to spend $700,000. The remaining $300,000 could be allocated as they wished. In addition, if they placed any cards on existing assets, they received an additional $5,000 to spend. This was intended to emphasize the importance of building on existing assets to get the most “bang for your buck.”

I was nervous about this game for three reasons: First, I was not at all confident that my pricing and budgeting math would work. After all, I’m a designer, not an accountant. Secondly, who thinks budgeting is fun? I wanted the students to get an idea of how to deal with real world constraints, but I didn’t want to bore them. Finally, 3) I was worried that they would get frustrated by the constraints, and give up. Fortunately, none of that happened, and I was, yet again, amazed by the energy and brilliance of these young people. They worked together and problem-solved. They argued with each other and came to agreement about what to prioritize. They even haggled with me over the price of a bench: “$1,000 for a bench?! I’ll go out and build it myself!!” And in the end, they were able to come up with some amazing plans to improve their communities. 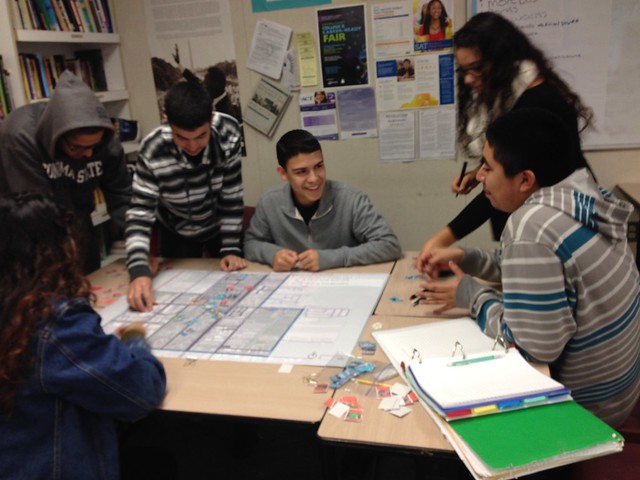 Students discussing how to allocate resources

One thing I had not expected was the students’ ability to translate what they had learned in the first session about city/county jurisdiction into this activity. Two of the groups consisted of students who live in unincorporated areas, while the other two groups were comprised of students within the Santa Rosa limits.

The status of their respective communities affected the types of improvements the students proposed, and they became aware of these distinctions. One student, Sergio, wrote in his post-session reflection, “Since we are an incorporated area, the city has already helped us out, so we used the million dollars to improve the community with exciting and fun things, like fountains and sculptures in parks, and a bowling alley.” The unincorporated groups focused much more on basic needs such as road-paving, sidewalks, streetlights, and healthy food options. The activity also helped the students think more constructively about tangible ideas to improve their communities. One student wrote, “Learning I live in an unincorporated area and that it factors into my neighborhood not having necessary utilities and resources is one thing, but thinking about how to fix it by planning and renovating makes me want to do something about it.” 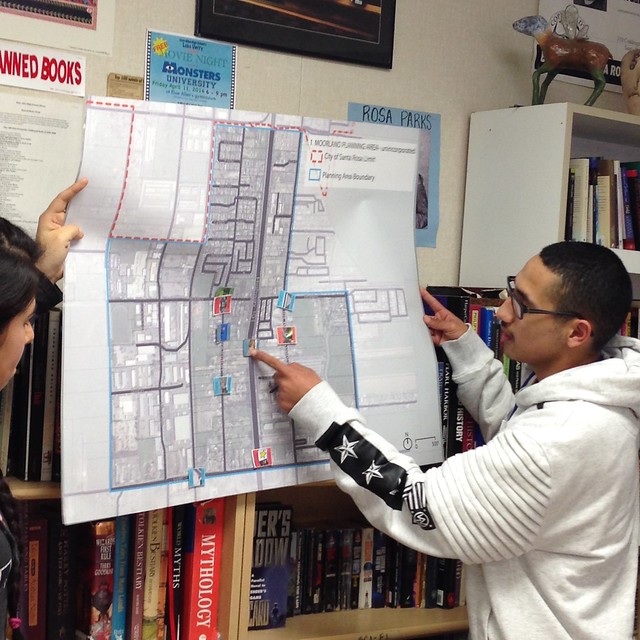 I was also impressed by the strategic approach taken by each of the groups. Several groups intentionally decided to cluster their improvements in a specific area. One student, Erick, explained, “We decided to put a lot of things in one area and fix it up for two reasons: one being that after making that area nice, other areas would follow; and the second reason being so that more people could come together for different activities in a central place, so the area would not be seen as unsafe.” Their thoughtfulness reminded me of how much community members bring to the planning and design process. I have my education and technical skills, but I don’t have a community member’s deep knowledge and understanding of the place itself. These young people simply needed a creative outlet to use their community expertise and work through complicated planning issues together.