Posted July 28th 2014 at 6:29 pm by Lakisha David
in Who Am I? An African American's Quest to Discover Community Through Family History

In Response to Knowing 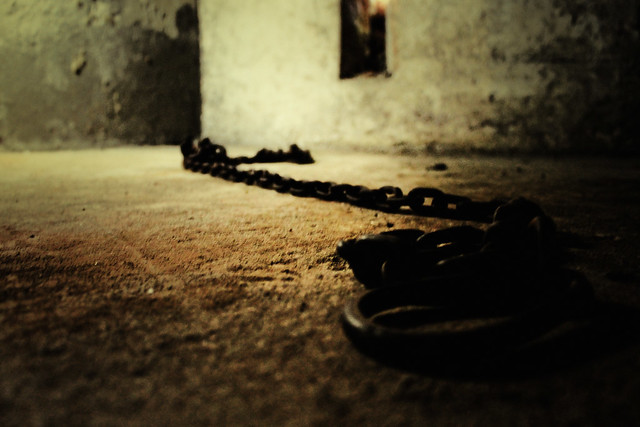 In the previous blog post in this series, I shared my genealogical family history through legal slavery and freedom in Central Louisiana from approximately 1798 to 1922. This small portion of my family narrative, with its illuminations on different aspects of life in Louisiana during the 19th century, was substantially more than my mother, Wylene, an African American woman in her 50s, knew about her people for the majority of her life. She was often moved to tears as she learned about more and more pieces of her family history.

She explained, “The pain of it does seem to be going away the more I learn… It’s as if each info we uncover, a layer of pain rolls away. Do you understand? It’s nothing like knowing yourself and who you are.”

She went on to say:

“Just knowing our history, the struggle our family endure[d] to get us where [we] are, all my life, I knew there [was] more to life than what I was going through… I feel the wall[s are] falling down. It’s like for the first time for me, I can make a stand, and stop complaining about what now being done or told [regarding slavery, discrimination, and African American history]. I now know what I need to do, for so many of our people don’t [know] the story of what [we] have contribute[d] to the growth of this society. It’s up to us to tell our story before the story get[s] exploit[ed]…

[W]e are not nobod[ies]. I don’t know if you understand. Knowing who my grandparents slave masters are and where they lived is not about hate, retaliation, or anything like that… [W]e are not nobodies. I do have family.”

I am not sure if I could ever fully explain how the discovery of my family’s narrative through the American Slave era makes me feel. When I first saw my 3rd great grandmother’s name, Milo, in a record dated 1813 making reference to her sale, I was ecstatic! I was just so excited to see her name. To know her name. To see the proof of her existence and know that there was a record of some aspect of her life. For her, her children (particularly my 2nd great grandfather), and her grandchildren, I felt like I reclaimed long lost members of my family. Through seeing and holding the copy of this document, I felt that somehow, I was holding and cherishing them, loving them now despite how they had been treated during their lifetimes. They are family. They are no longer lost in the cloud of the terms of “slave” and “slavery”. They can’t be denied. I know their names.

And then it hit me.

I’m actually looking at a Bill of Sale for my people, for my 2nd and 3rd great grandparents. 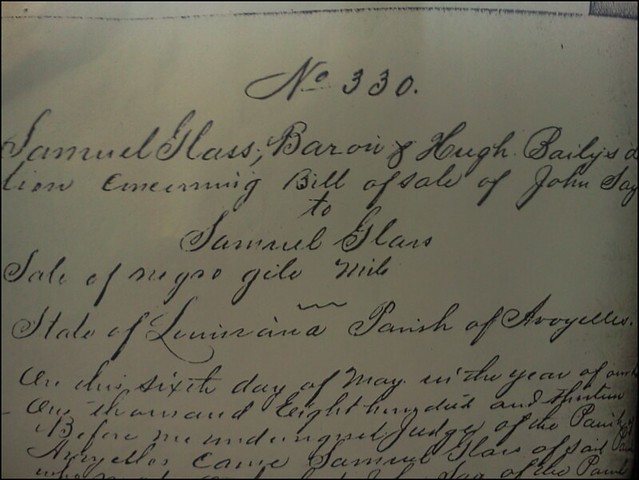 Civic Record regarding the sale of my 3rd great grandmother, Milo, to Samuel Glass by John Say.

It reads: “Samuel Glass, Baron of Hugh Baily’s …concerning Bill of Sale of John Say to Samuel Glass. Sale of negro gile Milo. State of Louisiana Parish of Avoyelles. On this sixth day of May in the year of ….one thousand and eight hundred and thirteen [1813]…”

What are you supposed to think when you see the Bill of Sale for your 3rd great grandmother?

Is there counseling for this?

Does this even matter?

According to researcher Arlene Stein’s 2009 publication Trauma and Origins: Post-Holocaust Genealogists and the Work of Memory, Holocaust survivors’ descendants pursue their origin stories and family narratives “to make sense of a traumatic past…and to make their own lives culturally intelligible.” Beginning in the 1970s, the adult children and later descendants of Holocaust survivors began to go through great lengths to create and document their family narratives. I argue that the American Slave era survivors’ descendants, present day African Americans, also need “to make sense of a traumatic past” and an often hostile present, and that conducting and sharing their own genealogical family history can have just as powerful an effect on the African American community. My mother’s response to learning about her historical family history is one illustration of that effect.

The further one journeys back, the more one has in common with others—common ancestors, common points of origin. The contemporary expansion of genealogy represents a search for identity and social location in an uncertain world. (Stein, 2009)

It is highly unlikely that an African American living in the United States of America would record their genealogical family history without also reflecting on the impacts of slavery and their own social identity. At least, that was the case for my family and for those I have encountered while conducting my search.

Discovering and sharing genealogical family history could be used as a tool to draw more members of the African American community to critical consciousness, which is how people come to critically analyze their social conditions and are moved to act to improve those conditions. At minimum, it could create a greater sense of community and solidarity among those with similar backgrounds, based on the example seen with the Jewish community and their annual remembrance of escape from bondage in Egypt.

In the case of developing the African American narrative, another specific group becomes salient: the descendants of their family’s enslavers. My 2nd great grandfather, James, son of enslaved Tamar and slave owner Samuel Glass, was sold to Francois Taussin on February 14, 1857. With the assistance of information provided by genealogist E. W. McDonald, I was able to contact a direct descendent of Taussin. From my membership in a Facebook group, I was able to connect with a descendent of Mary LaCroix’s (Samuel Glass’ wife) sister. In my next blog post, I will share more about my communication with them regarding the nature of our family history.

9 responses to “In Response to Knowing”