Posted May 1st 2015 at 3:58 pm by Alexa Mills
in Audio Portraits, Media Mindfulness 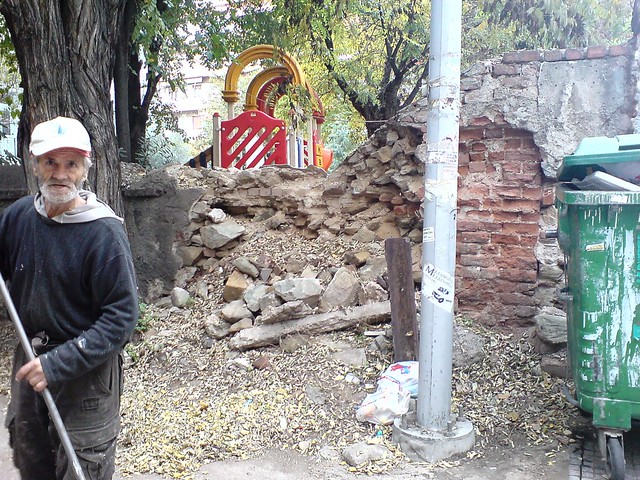 Who is this man, and why is he cleaning? What does his work mean in the context of his city? (Photo by Evgenia Kleidona)

This post details how to make an audio map of a city or neighborhood, with multiple contributors. I taught this workshop to undergraduate American Literature students at Aristotle University in Thessaloniki, Greece, as part of Dr. Tatiani Rapatzikou’s Urban Environments in Transition Lab. The workshop is appropriate for students of all ages, as well as community groups.

The goal was to show the character of a place from the perspective of those who live there, for the benefit of the general public. I had only been in Thessaloniki for about a week when I taught it, so it was also a chance for me to learn about the city.

I asked the students to bring a photo to the first day of the two-day workshop. The specific instructions were:

Please bring a photograph of a place in Thessaloniki that you feel strongly about — whether you have a memory of something that happened there, you love the place, you are scared of the place, or something about that place makes you angry.

All of the students in the workshop came with photos. Eleven out of eighteen students, it turned out, independently chose to photograph the same place. They photographed the waterfront. Thessaloniki’s waterfront is three miles long and newly reconstructed – a gorgeous seaside boardwalk. In the moment, I thought this was a lopsided collection. How could we give the public a balanced view of the city? I asked several students to take new pictures that evening. In retrospect, this was a mistake. The waterfront is the place in the hearts of the people of Thessaloniki, and their original collection explained why.

If time allows, and you’re looking for current photos rather than historic ones, it’s more fun (and more productive) to make time for the students to take original photos within class time. MIT PhD student Aditi Mehta’s See the Story workshop is a very good model. First students learn something about framing a picture. Next, they have a good hour or two in which they can go out and take photos. Last, they choose their favorite photos and present them to the class.

It takes practice to be able to ask questions that inspire a person to offer her deepest thoughts and most interesting stories. It’s not easy to be in the interview chair, either. Some people feel nervous as soon as someone asks them a question. A lot of people aren’t inclined to talk about themselves. A practice round helps students get comfortable.

In this workshop, I interviewed each student about her photos. After that, students met privately to interview each other.

Here is an interview based on a single-barreled question:

Interviewer: “What did you have for breakfast this morning?”

With a double-barreled question, you up your chances of getting a full sentence, or even a little story:

Interviewer: “What did you have for breakfast this morning, and why did you choose it?”

Interviewee: “I had to fry an egg, which I didn’t have time for, because it was literally the last thing in my refrigerator. My roommate a.k.a. the hungry hippo ate all my cereal and never replaced it.”

The latter answer is the beginning of an interesting story.

If you’re working with students who don’t own smart phones, you’ll need to buy equipment to share. You’ll have the advantage of teaching everyone at the same time, and also gathering the same quality audio files.

If, however, workshop participants have some form of audio recording device, either in their smart phones or on their laptops, let the students use their own equipment. It saves money, and students will be able to continue recording and producing with the equipment they already own as soon as the workshop is over.

In this workshop, students used what they had on their phones. After making sure everyone found the microphone and record button, we simply got started in pairs. When things went wrong for students, I offered one-on-one support. They also helped each other.

After the students interviewed each other in private, in pairs, about their photographs, they exported their audio files to their computers, or their classmates’ computers, however they could do it. More than half of the students encountered a problem as they tried to do this. I helped them individually at their desks, but stopped the class if it appeared that multiple people were having the same problem.

It’s always okay to spend some time struggling with technology. It’s an inherent part of the production process.

I created a special SoundCloud account and named it Thessa Scenes the evening before the workshop, and emailed all of the students the username and password. They could log in and upload files themselves.

This is a story about the seaside:

This is a story about a gentleman who cleans a neighborhood park on his own volition: Walls and Souls Playground by Evgenia Kleidona

This is about the relationship between ancient and modern in a 2,300-year-old city:

Though the collection of stories was available in list form in SoundCloud before the workshop was over, we wanted to assemble them on a map. Embedding sound files in a map is not the simplest task, and I hadn’t found a way to do it yet when the workshop started.

With 45 minutes left, and a few students still struggling with their audio, I challenged the class to try and figure out how to make an audio map with SoundCloud files. Several were quick to discover the fairly straightforward process of embedding a YouTube video on a Google map, but that didn’t solve the problem.

In the last minute, participating student Evgenia Kleidona was able to do it via Map Maker. This is the map the students produced: