Shreveport, the third largest city in Louisiana, doesn’t have a passenger rail station anymore. The closest is 35 miles west in Marshall, Texas. But for nearly a century, Shreveport was a railroad town, a hub serving northwest Louisiana, and Central Station along with at least one other station provided service from downtown to the rest of the country. As in many small cities and towns across the US, the car supplanted the train by the 1950s, leaving behind rusting rails and beautiful station buildings once meant to showcase a city’s pride to visitors. 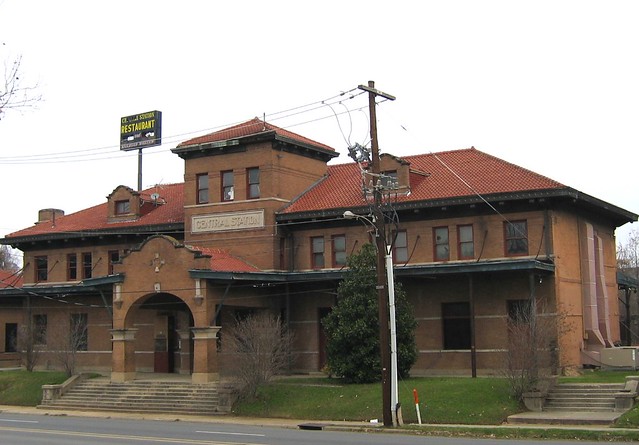 Built around 1910, Central Station is neither the oldest building in Shreveport, nor the grandest in appearance. It is listed on the National Register of Historic Places, but many residents don’t know about it, shadowed as it is by the I-20 overpass that soars past to cross the Red River. Rusted train cars still sit off to one side of the building, the only visible clue to its former use. The building’s history and current use highlight social juxtapositions that pervade the South, often just as hidden to outsiders as the structure itself.

After the railroad station closed in 1955, the building did a stint as a warehouse and a restaurant before reaching its current incarnation: a gay bar (or, as the Shreveport tourist bureau website describes it, “an alternative lifestyle nightclub”). It isn’t the only gay bar in the city, but it’s the biggest one. It may have been the inspiration for the vampire bar “Fangtasia” in the True Blood series, which has filmed in and around Shreveport. Like Fangtasia, Central draws patrons from throughout the city and from nearby small towns, where it isn’t always safe to be queer.

Historically, this has not been a very tolerant place.

In 2004, around 78% of Louisiana voters supported a constitutional amendment banning same-sex marriage, a largely symbolic move since the state civil code already prohibited such unions. In 2011, at another bar in downtown Shreveport not far from Central Station, a man beat a gay patron with a pool cue because of his sexuality. You can still legally be fired or kicked out by a landlord for being gay or transgender in Louisiana. Because of all this, and because of the strong roles church and family traditionally play in Southern culture, some queer locals are only out to friends and maybe a few family members. As a result, places like Central Station (which also hosts occasional fundraisers for area LGBTQ groups like People Acting for Change and Equality (PACE) and The Philadelphia Center) are special. It plays a similar role as the bars of Chicago’s Boystown or New York’s Greenwich Village did in earlier decades, before gentrification set in. Bars like Central Station are a much-needed social space, an oasis of acceptance and support.

Perhaps equally important is the fact that people of all races hang out at Central. When Central Station was in its railroad heyday, it had separate waiting areas for black and white passengers, the former possibly in the gallery that’s now a second bar overlooking the main dance floor. Reinforcing such physical separations was an ever-looming threat of racist violence. Shreveport was once one of the lynching capitals of the country: white people lynched 19 black residents in Caddo Parish (the equivalent of a county) between 1900 and 1931, more than any other parish in Louisiana. During those bloody years after slavery officially ended, countless black Louisianians passed through this train station and others like it on their way to the West and the North, where they hoped to find some freedom from Jim Crow and its violence.

Today, Shreveport remains a somewhat socially segregated city. Central is often more integrated than the city’s churches and schools. There’s a room where, on a given night, you might find a black man and his white boyfriend doing a Texas two-step to country music. Beyond it is a larger dance floor where the DJ plays the typical techno-remixed Beyoncé to a crowd of various races, ages, and genders, and where both black and white drag queens perform on weekends. Patrons aren’t necessarily any freer from racism than their straight neighbors, but when there’s only one nightclub where you can be safe and welcome, you learn to live and let live. 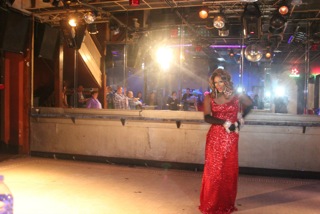 Outside of Central, things are changing a little, slowly and through the hard, patient work of local activists. Shreveport voters elected their first black male mayor, Cedric Glover, in 2006, and their first black female mayor, Ollie Tyler, last fall. The City Council passed an ordinance banning anti-LGBTQ discrimination in housing, employment, and public accommodations in 2013, after tireless lobbying by local groups, PACE and Forum for Equality. Drawing a regional audience, downtown Shreveport now hosts the annual North Louisiana Gay & Lesbian Film Festival. Though the trains no longer carry visitors to and from Shreveport, there are signs that the city is starting to move ahead on its own.

This is one of many posts responding to the question, “What’s Happening at the Oldest Buildings in Your Town?” If you’d like to submit an example from your own city, see the easy steps here. Check out Friday’s post on The Daut Pasha Hammam, in Skopje, Macedonia .