“2014 Audubon Ballroom and Lasker Biomedical Research Building” by Beyond My Ken – Own work. Licensed under GFDL via Wikimedia Commons.

Not many buildings constructed in the early 20th century with brightly colored terracotta façades and busts of Greek and Roman mythology, are memorialized in rap songs. But, not many buildings are the Audubon Theatre and Ballroom, located in the Washington Heights neighborhood of Manhattan, New York.

In a song named after the building, Lupe Fiasco raps:

“Especially when your past is | Martin, Baldwin, Audubon Ballroom | Turn the glass ceiling to a glass floor | And make a trampoline out of a trapdoor”.

This mention of the Audubon is most definitely a reference to the historical moment that occurred in the building: Malcolm X’s assassination on February 21st, 1965. But, I’d like to think it is also an invocation of both the history of the Ballroom leading up to that moment and the history that would follow it, for Malcolm X’s legacy is deeply connected to both. 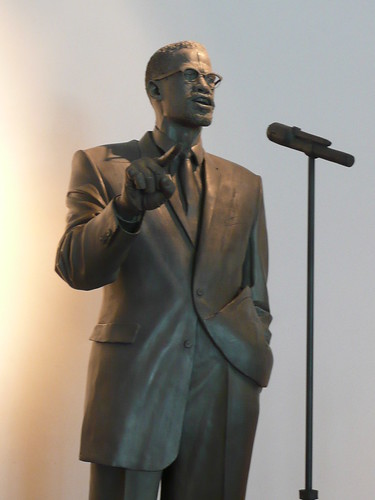 For about a decade now, parts of the original Audubon have been renovated to house the Betty and Malcolm Shabbaz Cultural Center. On my first visit, I encountered Malcolm’s likeness in a life-size statue of him in the lobby of the building. Then, as I mounted the short flight of stairs to the second floor where most events are held, both his and Dr. Betty Shabbaz’s wisdom, in large quotes and images surrounded me. In this atmosphere it is easy to sense the freedom fighter’s aura and be transported back to the days in the 1960s when he would frequent the building.

Just 15 years ago though, no one knew whether any part of the ballroom and as a result the cultural center named for Malcolm and his wife, would exist. In the late 1980s Columbia University proposed to partner with New York City to demolish the site and build a biotechnology research lab. For over seven years, a battle raged in the press and in the streets as preservationists, activists, and even the Manhattan borough president fought against the plan.

Indeed, when William Fox, creator of the media giant Twentieth Century Fox, originally commissioned star theatre architect, William Lamb to build the Audubon in 1902, his vision was for a major entertainment complex. For decades that is what he got. The two-story building was a hub of activity; in addition to the movie theatre and grand ballroom, it housed restaurants, shops and meeting rooms. With its striking exterior, decorated with exquisite color and detail, the energy of the Audubon was reflected both inside and outside the building.

While preservationists fighting Columbia recalled this entertainment and architectural history, all told, it was Malcolm X’s connection to the building that seemed to most mobilize people in opposition to the University’s plan. Many of the publically available letters submitted to the Landmark Preservation Commission, tasked with deciding the fate of the building, mentioned Malcolm’s assassination as a key reason to preserve the site.

One 1989 letter began to connect the dots between the building being important as the site where Malcolm was murdered and why Malcolm chose to give his monumental speech there in the first place. It read: “It was no mere chance that Malcolm X was assassinated at the Audubon Ballroom; he was giving a speech… the last of a series of important public appearances he made there during the last two years of his life. And the reason he chose this as a venue had to do in turn with the Audubon Ballroom’s historical importance within the cultural life of black and Hispanic Harlem.” History shows this to be true.

In the 1930s, William Fox lost his fortune to the Great Depression causing the Audubon to change ownership. After a short stint as the Beverly Hills Theatre, it became the San Juan Theatre. Cultural studies and urban planning expert, Luis Aponte- Pares recounts that the San Juan “recorded the cultural history of Puerto Ricans and other Latinos in New York since the early thirties.” The theatre showed the latest movies produced in Mexico and Latin America and the ballroom hosted major political figures from the Latino community and artists from Puerto Rico and Latin America. Through the 70s, even after the San Juan Theatre closed, the Audubon served as a meeting place for community groups, both black and Latino. Malcolm X’s own Organization for Afro-American Unity, a Pan-Africanist group focused on fighting for the human rights of Black people throughout the Western hemisphere, held regular meetings in the Audubon.

Lupe Fiasco’s reference then to the Audubon Ballroom as a source of pride, a building with a history that provides the confidence to ‘turn the glass ceiling to a glass door,’ is about all that the Audubon Ballroom has come to represent: the struggle for freedom and self-determination and a place of community and solidarity.

This is one of many posts responding to the question, “What’s Happening at the Oldest Buildings in Your Town?” If you’d like to submit an example from your own city, see the easy steps here. Check out the previous post on The Heptapyrgion, a fortress turned cultural center in Thessaloniki, Greece.