Old Building Made New: The Mathallen in Oslo, Norway 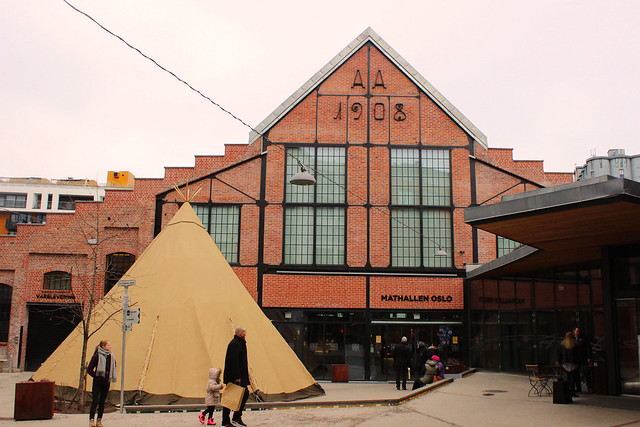 Entrance to the Mathallen

Mathallen in Norwegian means “food hall.” Oslo’s Mathallen is located in the historical center of the city, near the Akerselva River. Sited by the lively and youth filled, Grunerløkka neighborhood, it is a vibrant and energetic place. 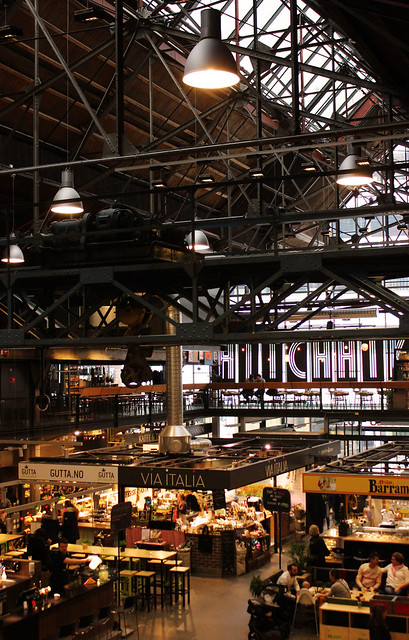 For Oslo’s inhabitants, the Mathallen is the first and only covered food market in the city. When the building was originally constructed in 1908, it hosted the “Gamle Broverksted”, a traditional industrial hall devoted to the production of castings and iron foundry for bridges. Its original owners, the Vulkan Jernstøberi, an iron foundry company, also controlled the nearby industrial area including several other warehouses and buildings. The production of iron castings in the Gamle Broverksted occurred until the late 1950s after which production was moved and the building became almost vacant, save for a few office spaces that were still in use.

In the beginning of the 2000s, a private real estate company, Aspelin Ramm, enticed by the central location of the former Gamle Broverksted decided it was ripe for revitalization. Aiming to preserve the building’s history, they developed a plan with the architecture firm Arkitektkontoret LPO that extended beyond the building to the broader public domain. Construction started in 2009 and three years later, the current market opened. So too did a wide range of services and facilities in the Vulkan neighborhood. Some welcome additions included, a ballet theatre, an art school and several restaurants and cafes. The redevelopment of the area involved several public and private actors who worked to keep the strong identity of the place, and preserve the existing urban fabric.

The core architecture of the “Gamle Broverksted” building was almost entirely preserved. New additions included glass panes to contrast the original black steel and brown bricks. Now a site for experiencing cultures from all over the world through their culinary delights, its architectural traces still reckon to the building’s past. 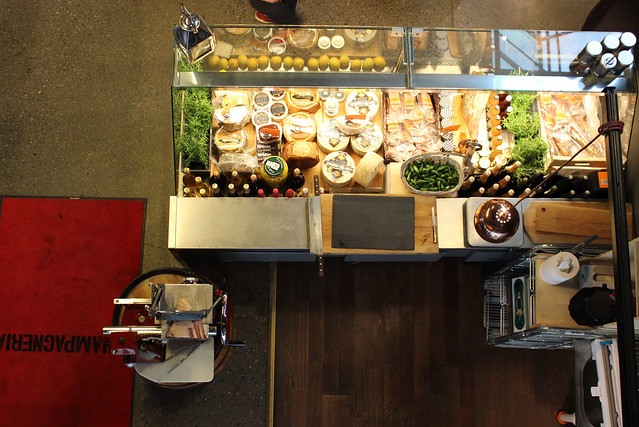 A stall in the Mathallen selling Spanish products

This is one of many posts responding to the question, “What’s Happening at the Oldest Buildings in Your Town?” If you’d like to submit an example from your own city, see the easy steps here. Check out the previous post on The Audubon Theatre and Ballroom in New York.