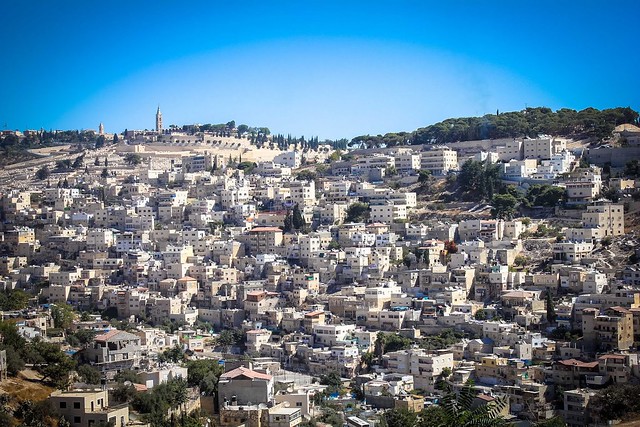 I met Samer* on a field trip to Abu Thor, a neighborhood in East Jerusalem. It was July of 2015, and I was working as an urban planner and architect for the United Nations. I am Palestinian, and the UN was one of the few agencies working on planning in East Jerusalem.

Samer is a community leader in Abu Thor. My colleagues and I started most of our housing survey visits and community interviews from his house. On a steep hill overlooking Silwan from the East and the Southern Wall of the Old City from the North, his house was perfectly located. From his property, we gazed at the dense, declining, and informally built Palestinian neighborhoods nearby. On his patio we listened to many stories about the local Palestinian residents’ struggles to remain in their houses and avoid demolition and displacement.

When I met Samer that morning, he was getting ready to make his monthly journey to the Post Office downtown, where he’d stand in line to make a payment of $120 U.S. dollars to the Jerusalem Municipality. He has been paying regularly since 2008, when the Jerusalem District Court issued him a book of 82 pre-printed payment slips and ordered him to pay his fine over a period of nine years. He will make his final payment, under the ruling of the court’s order, on May 15, 2017.

Samer told me that he has paid over $10,000 in municipal fines since 2008, and has also employed multiple lawyers to present his case at the District Court, and multiple urban planners to prepare and submit building drawings to the municipality in the hope that the construction of the house extension on his land could be “legalized”. On each occasion, the drawings were rejected, and the District Court ruled he should pay another round of monthly fines.

His crime? Samer began building an addition to his home to accommodate his growing family in 2003, but he did this work without an official permit. More than a decade earlier he’d had his construction plans drawn up, and he’d submitted them to the municipality for approval, but after waiting all that time for a green light, he just began building.

As a result of these complexities, and in the absence of any realistic and responsive planning mechanisms, Palestinians resort to informal construction to meet their growth demands. This, overtime, has resulted in a scale of informality that leaves many families living in underserviced neighborhoods, and under constant threat of demolition and displacement.

As an architect and urban planner who has researched and worked in East Jerusalem for more than four years, I have witnessed the Israeli-run Municipality’s policies of neglect toward the Palestinian neighborhoods. In my experience, the municipality exerted all efforts to limit the growth of the Palestinian neighborhoods of the city through employing various policies that limit Palestinians’ rights to build and develop.

The story of Samer’s house is a case study in how basic construction for Palestinians in Jerusalem has devolved over the past 50 years. His great grandfather, who died in 1920, was a farmer living on the outskirts of the Old City of Jerusalem. He lived with his wife and four children in a stone built two-story house. As the Ottomans, British and Jordanians came and went, the family grew. They paid some taxes to local collectors under the Ottoman Empire and built a small extension. In 1960, the family prepared architectural drawings for a new housing block and a new housing extension, which were approved by the Jordanian municipal administration.

In 1992, Samer explained to me, he contacted the Buildings’ Maintenance Unit at Jerusalem Municipality to report that the original stone house, on his part of the land, had fallen into disrepair. Receiving no response, he went ahead and hired an architect to prepare a design for upgrading and expanding the lower floors and for the construction of a third story. Samer’s four children – babies in the mid 1980’s – were growing up and preparing to have children of their own. The family needed a larger space. In the winter of 2003, Samer went ahead and proceeded with the reconstruction of the third story.

In the summer of 2004, after Samer began work on an addition to his house, a Municipality officer visited the family. The family ignored his visit the first time, but could not do so on the second time. The officer asked Samer to visit the Municipal Licensing Department to obtain “the building permits required.” This marked the beginning of an ongoing battle for Samer, in which he faces court cases, continuous requests for building plans and permit applications, fines. He tries repeatedly and tirelessly to face the technocracy, the language barriers, the administrative expenses, and the exhaustive documentation, so that he can build a “home.”

His battle is still ongoing, and so is the battle of the 300,000 Palestinians in the city they call home.

* Name changed to protect his identity.

Post and photos by Anjad Hithnawi, a Humphrey Fellow in the MIT Department of Urban Studies and Planning.