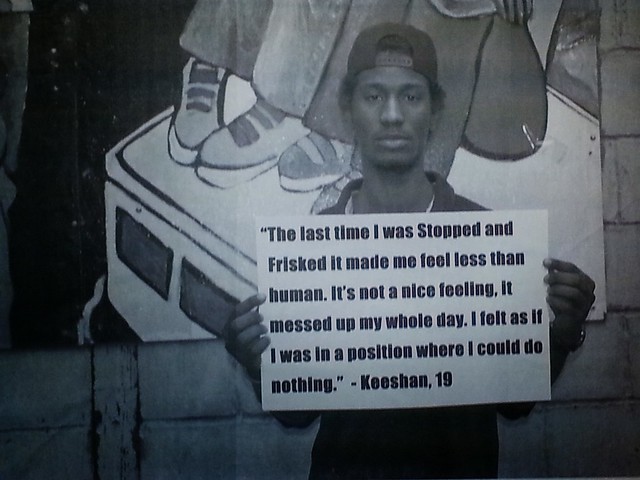 On October 22nd 2015, Cory Greene, a formerly incarcerated doctoral student from the City University of New York and a researcher with the Public Science Project visited the Department of Urban Studies and Planning to discuss the methods and ethics of critical participatory action research (CPAR). CPAR is a theoretical, epistemological, and ethical commitment of accountability to those most closely related to, and affected by, the issue(s) under study. Greene’s talk was the second in the PAR Speaker Series. He began his discussion by sharing his personal story, because one of the fundamental values of CPAR is to understand and respect the knowledge people obtain from lived experience.  From there, he introduces us to the Public Science Project, and in particular the Morris Justice Project – a CPAR project about aggressive policing in the Bronx.  From Greene’s talk, we see how the way one approaches research and inquiry is actually a political and socially-conscious act.

“We were engaged in many activities that I will say now were extremely counter to community development, community liberation. But– and this is a really important but– the values and ethics and codes we had for what we thought was important were really good.”

“The Public Science Project was created because Eve Tuck, Michelle Fine, Maria Torre, Yasser Payne, and so many others who were part of that early conversation believed that we all have the right to ask questions. That research is a public enterprise. And although we all already ask questions, only when certain people, also know as people with PhDs and people in professional institutions, ask questions are they legitimized.”

“We work from the assumption that research, theories, social science, the academy, historically and contemporary has been a site of violence for marginalized folks. It has been part of colonialism, it reproduces oppression all the time and if we are going to engage in the space, the theory, the ideas, we want to make sure that we are being really reflective.”

The Gifts That They Bring CPAR Project: Addressing Mass Incarceration and Education in Prison

“There are multiple forms of evidence that tells us that people who are formerly incarcerated are not threats to campus safety. But we didn’t really want to harp on that argument. The argument we wanted to make was that universities, colleges, students, professors, the space, the civic life, and the intellectual life is gifted when people who are formerly incarcerated come into these spaces.”

“Even when we do everything right— the group dynamics, we talk about power, we understand power and create the context to challenge power and reduce harm and engage in research in every step of the process— the way things work when we get invited to presentations its not like the people from the Bronx get an email or a call.  It is usually Bret, Maria and Michelle, who other institutions reach out to…How do we explicitly say and practice in reporting back findings that community folks are leading the process too? That is another way of stripping who is the expert.”

“Selecting methods is a political act…When only researchers are deciding what methods answer the question that is a political exclusion of people…One of the ways of making systematic research a public thing is really opening up these things.”