This is the second in a series of four posts on the impacts of pedestrianizing Bogotá’s Carrera Séptima. To learn more about pedestrian main streets, scroll through this global conversation on the topic.

Every day formal and informal vendors come to Bogotá’s Cra. Séptima, a busy main street, to work and make a profit in order to live. However, after the city converted their street to pedestrian and bike access only, many of them saw their profits plummet. 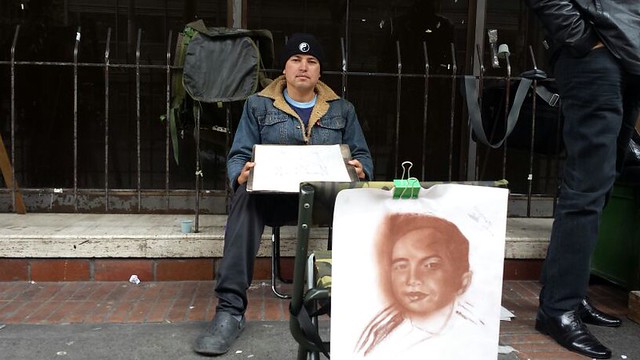 Artist and informal vendor Carlos Alberto Saavedra Bushel finds pedestrianization unfavorable. He would like the city to create a formal space in the area for artists to sell their products. Photo by Maria Camila Villamizar.

The pedestrianization of this street began on February 25th of 2012. The district administration of Bogotá wanted to prioritize pedestrian safety after the 26th Street Bridge was demolished, so the city blocked cars from driving between 19th Street and 26th Street during daytime hours. The city later extended pedestrianization to the Plaza de Bolívar, leaving only alternate paths to the center, including third, ninth and tenth and 19th Streets.

We, six engineering students at Universidad de los Andes, interviewed 30 vendors and business owners selling their goods on the pedestrian portion of Cra. 7. We included both formal (pays rent for storefront) and informal (sells wares on sidewalk or from a cart) sector and created a map with details on several of those interviews. The location of each entrepreneur can be seen in the map presented, in which the red locators indicate informal trade and green formal trade.

Pedestrianization has had various effects on the landscape of Cra. Séptima. For vendors, impacts vary depending on which stretch of road they are located. Speaking specifically of the commercial sector, we found that sales declined for formal vendors between 19th Street and 26th Street. Sales increased for some who were located between 19th Street and the Plaza Bolivar. For informal traders in general, sales declined. 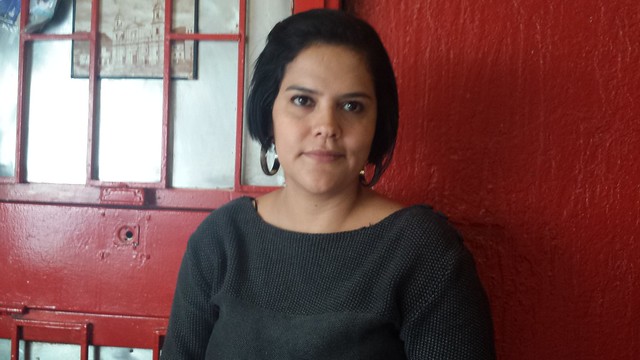 Formal vendor Ana Maria, who sells donuts and pastries from a store, would like to see vehicular traffic restored on Cra. 7. Photo by Alejandra Guerra.

Formal traders complained that a large number of street hawkers invade the street daily, and hence it is necessary to relocate or formalize them. Also, the formal vendors say, pedestrianization has increased insecurity — the number of homeless people has increased, police are less present, so people do not go to the center that often. On a positive note, pedestrianization has decreased noise pollution from cars and pollution.

Meanwhile, informal traders say it is very difficult to work because the police always come to disrupt their business, which exacerbates their problem of decreased sales. Before pedestrianization, they say, more customers came to the area. However, even though sales have been affected, several informal vendors recognize that the measure is good because people have a place to walk. Still, the vendors would like to see improvements in the conditions of street in terms of infrastructure and aesthetics.

The pedestrianization of Cra. Séptima could have been an opportunity for the Mayor of Bogotá to humanize the city’s urban space. Urbanist scholar Jah Gehl wrote, “The quantity and quality public pedestrian space determines the quality of an urban city.” The proposed investment and public administration measures for Cra. Séptima, however, have not achieve a quality pedestrian space.

In our sample, we found that the majority of formal traders between the 19th St. and 26th St. have been harmed by the pedestrianization, to the point of leading to the bankruptcy of some businesses. Meanwhile, some formal traders located close to Plaza de Bolívar have increased sales, as the plaza is a historical and cultural landmark in Bogotá, and more offices are located in this section. People ask for a more productive police presence. Overall, many vendors say that they preferred Cra. Séptima as it was before, with cars allowed, and have made petitions to the mayor. Parallel to this, there are informal traders, who have also reduced their sales because of the difficulties they have to work in the area. They ask the mayor to help them to improve their working conditions, either by organizing or relocating them.