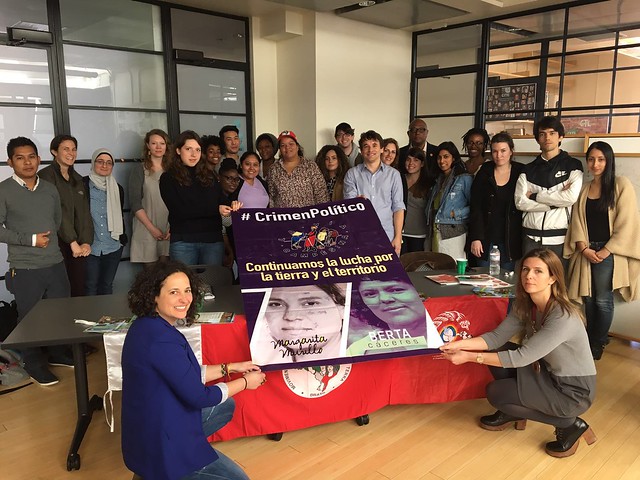 La Via Campesina Sign: We continue the struggle for land and territory.

The gruesome March 3rd murder of Berta Cáceres, the Honduran human rights and environmental activist, turned many eyes, ears, and hearts towards her Central American country. While Cáceres’ Honduras is the most dangerous country to be an environmental activist, the struggle amongst peasants and indigenous communities to reclaim land, is active across national boundaries. This is something Cáceres’ understood.

It is no surprise then, that at a March 31st discussion, hosted by Latinx, a student group in MIT’s Department of Urban Studies and Planning, leaders from Brazil’s Landless Workers Movement (MST) and La Via Campesina, were embodying and discussing the importance of considering resistance at the transnational scale, even as they paid tribute to Cáceres’ legacy.

Deborah Nunes Leno Da Silva hailing from Brazil and Yasmin Lopez from Honduras spoke through Portuguese and Spanish translators from the Friends of the MST and the non-profit Grassroots International, as they shared the work of their social movements.

Lopez is a member of the Women’s Regional Commission of La Via Campesina- Central America. This global social movement led by landless peasants is focused on the advancement and preservation of small-scale agriculture to promote food sovereignty, social justice & dignity.

The movement is working on multiple geographical scales. “We are not just resisting.” Lopez says through her translator, “We are proposing. We have a lot of proposals in Congress for policies that would favor us. But, it is very hard because we are working against a right wing, neoliberal government.”

Acknowledging the transnational nature of the struggle for food sovereignty and human dignity is key to Lopez’s and La Via Campesina’s analysis. “The criminalization of the struggle and inequality isn’t just a problem in Honduras it is a worldwide struggle,” Lopez argues. In recognition of this, the movement is engaged in international advocacy for the recognition of the rights of peasants around the world.

Making connections across social movements focusing on other issues is also one of their priorities. “La Via Campesina by itself will not be able to accomplish its main goals,” Lopez says. “We need to build alliances with other organizations and other social movements… When we defend our land, we are also defending health, education, food and housing. Our fight is to have a dignified life.” 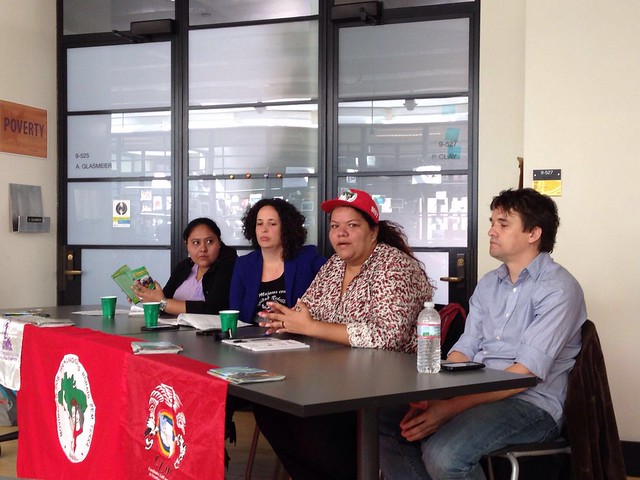 Yasmin Lopez and Deborah Nunes Da Silva with their translators.

Deborah Nunes Leno Da Silva is a member of the National Coordination of the MST. The MST was created in 1984 as a mechanism to resist the concentration of land amongst latifundia and later, large agri-business companies in Brazil. Their three objectives are to resist land dispossession in the countryside, push for agrarian reform, and build a socialist society.

Since the start of the movement, one of the MST’s major tactics has been to occupy land. They choose land that violates Brazil’s three part constitutional requirement that requires the resource be put to use in a manner that is productive, does not create a negative environmental impact and respects labor laws.

The MST also prioritize the importance of building international solidarity by organizing and deploying brigades of members to other countries. These members are tasked with understanding the reality of the workers in the context they are visiting and building relationships with working class organizations. “We have to recognize that our society is divided by class and that those classes have different antagonistic interests,” Da Silva says through a translator. “The 1% causes a lot of problems for the rest of us. So, the counter position of the working class has to be organized and international. When we travel to and visit with workers in different countries we see that the problems they face are very similar to what we are facing.”

Da Silva herself has been deeply moved by her current participation in a brigade to the US. “I’ve been surprised by the things I’ve learned on this trip,” she says. “The people outside of this country don’t know the realities of African-Americans nor immigrants. What they know is only through the eyes and words of the government. Once you know the reality of other workers, it is easier to build solidarity.”

For both Da Silva and Lopez, universities can stand in solidarity with social movements aiming to reclaim land for peasants and landless workers. But, deep alignment of values is critical. “We need some of the research that the academy is creating in order to do our advocacy,” Lopez says. But, “it is very important that the people who are creating this have a social awareness… People doing this kind of work also need to be connected with our goals, be connected to the land, be connected with us as human beings. It is much more than just doing research.”

While Da Silva agrees with the potential for solidarity from the academy, she is clear on how subversive of a proposition this is. In capitalism, everything is organized to favor and uphold the system, she argues. So “even public universities are in service of capitalism.” Offering a closing charge to the audience, primarily composed of students, she declares, “the way to express solidarity with social movements is in how you use knowledge. It has to be used to liberate.” The task then for those in the academy is both to produce new knowledge and to “help others to have the same opportunity to empower themselves.”