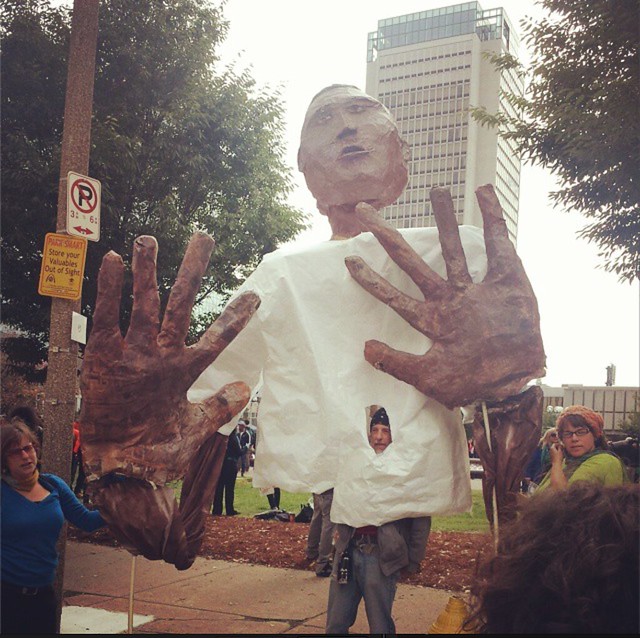 “Creative action liberates us by reminding ourselves and other that we can come up with new ways to disrupt.”- Chrislene DeJean

Chalking outlines of dead bodies on the sidewalk. Occupying St. Louis University for a week. Holding up coffins adorned with mirrors for police officers to literally see themselves in the reflection of ‘the dead’. These are just a few of the many creative actions that have been organized to protest Michael Brown’s killing and the structural issues, including the devaluing of black and brown lives and state-sanctioned violence, that it represents.

Chrislene DeJean and Terry Marshall, co-founders of Intelligent Mischief, a creative design lab for social good in Boston, have both been struck by how, in departing from more traditional movement strategies like marching and protesting, these creative actions and others make possible new realities. Reflecting on their experiences both organizing and being a part of some of these actions in Ferguson, they’ve distilled some lessons below that are deepening their praxis around how artistic interventions can strengthen activism in ways that are gripping and sustainable.

Many news outlets vilified Ferguson protesters. Tropes of uncivil and hostile looters dominated media coverage in ways that vastly overshadowed on-the-ground realities. For Terry, one of the most successful creative actions that helped to change this narrative was Requiem for Mike Brown, a flash mob-esqe action wherein a pre-organized set of audience members at the St. Louis Symphony Orchestra interrupted a concert by singing the civil rights song, “Which Side are You on?” and dropping hand drawn banners inscribed with “Black Lives Matter.”

Transcript: “I think the most creative actions came from small independent groups. So literally a day before I got there Requiem for Mike Brown happened. That set the bar for what creative actions could happen, and what was possible. It was important to have that, and see how much attention that got and how that spun the story. As opposed to what the media attention was which was –the every night protests and people being at the police stations every night– which was also important because it kept Ferguson in the spotlight but at the same time it was still helping, in terms of media and people knowing stuff, it was spinning this narrative of unruly protesters. The point with creative actions is how do we control the narrative? How do we tell the narrative from our point of view, in a way that clearly gets our message across for liberation and justice. There are a lot of actions we can do that are not bad but aren’t getting out a clear message. If your message isn’t clear, that narrative can be spun by someone else or the powers that be.”

Another cogent and powerful action that countered the “brutish” protester narrative was conducted by TribeX, a group of young Ferguson residents that came together in the wake of Brown’s death. Marching solemnly in twin single file lines into the baseball village of the Cardinal’s Stadium, TribeX members and allies positioned themselves on the sides of a stairwell fashioning a protected alter to Brown. Mimicking a viewing at a wake, the group held the space in tact for each participant to walk through, place a rose on the altar and share a brief thought. In this reenactment of a funeral, a ritual often marked by vulnerability, raw emotion, and grief, TribeX members were taking charge of the story around Brown’s death. In reflecting on this action, Terry, who worked with the group in planning and execution reasoned, “the only way we can respond is creatively and peacefully. This is how we fight the narrative that we are brutalistic and angry.”

Watch From 3:00 minutes until the end to see recorded feed of TribeX members and allies preparing for Creative Action at Cardinal’s Stadium. Video Credit: Youtube/bellaeiko.

The above action consisted of no more than 30 people. In this minor detail lies another attractive feature of creative actions: you don’t need to have massive crowds to get your message across. In reflecting Chrislene noted: “Creative actions allow you to engage in a way that suits you while allowing you to flip the narrative. Everyone can be a part of resisting. In a traditional march and protest you have to follow the person leading the march.”

Making connections to other movements

During the October 10th to 13th weekend of resistance dubbed #FergusonOctober, organizers sought to focus attention on the broader pattern of racial profiling, harassment and police brutality by also making central other victims of police brutality, such as John Crawford III. On August 5th, 22-year-old Crawford was shot and killed by police in a Walmart in Bevercreek Ohio. Responding to a 911 caller who reported that Crawford was walking around the store aiming a gun at fellow customers, police shot and killed Crawford within minutes of arriving on the scene. The gun Crawford was allegedly brandishing was a toy sold by the Walmart. On the Monday of #FergusonOctober, activists occupied three Walmarts, shutting down at least two of the stores for a period of time. To Chrislene, the decision to occupy Walmart had multiple layers of symbolic significance.

Transcript: It was literally for solidarity but its also representative of how corporate greed has been taking control of American democracy. So in occupying a Walmart, which has been stealing from poor folks, we are trying to make people understand and see that this is about economic justice and democracy. That is something that folks were talking a lot about. Trying to link it up to these larger systemic issues.

Transcript: Its always been interesting to me to see what is happening in Palestine and how and how they identified with Ferguson. That lined up with folks but we are still struggling with how does this come together and what does that mean for all of us and how we work together in these global issues that we have? I think we can only think creatively about this because right now, we can’t be marching together physically.

There is no clear cut, cookie-cutter way to engage in compelling creative action but for Terry and Chrislene, the opportunity to rethink the action logic of protest is paramount.

Transcript: We are stuck in this narrative of protest from the 60s. One of those narratives is big huge protest, big huge marches. Those things serve a purpose given the context and strategy but not everything has to be that. I think that is what is part of creative action and narrative strategy- reclaiming and refiguring out the action logic of a lot of our stuff. A lot of stuff doesn’t have action logic it is just copying something, so we just need a big protest with signs. But those things came about because people sat down and talked about the action logic.

One response to “Two Boston Activist Reflect on Creative Action in Ferguson, MO”