Posted August 19th 2018 at 5:50 pm by Tanya Sayyed
in Sensemaking through Sound 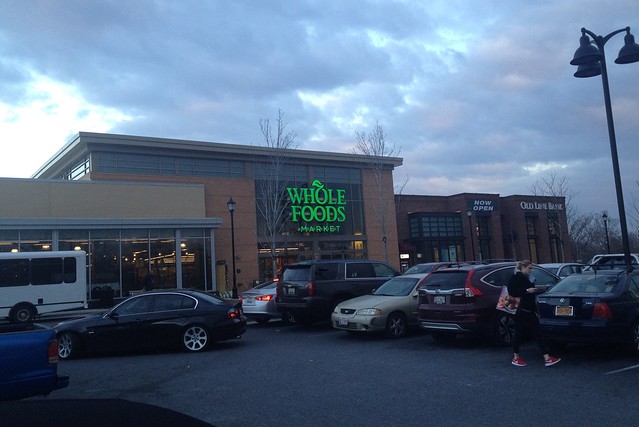 I collected my soundscape aural data and recordings at Whole Foods (WF), Baltimore Avenue/Route-1 and Van Buren, Riverdale, Prince George’s County, Maryland, 03/13/2018, between 6:00-7:05 pm at the entranceway, indoors, next to the produce, and outdoors. The metro-shuttle operates between 4:30-7:00 pm. The nearest towns with accessibility to WF by car, bus, metro/shuttle, biking, or walking, are Riverdale, Hyattsville, and College Park. The weather was sunny/cloudy, cold/windy, 42⁰F, which could have affected walking and biking. I observed almost exclusive car activity. Two bikes were parked, and no one utilized the bus stops/shuttle.

In places I lived in Africa, a market area soundscape would include the shrill voices of produce sellers, friendly haggling voices and clicking of tongues of sellers/customers negotiating prices, crackling and clunking of baskets and buckets for carrying grains, clinking of coinage, clucking of chickens for sale, braying of donkeys transporting goods home, and thudding of bare-feet or sandals on dirt. 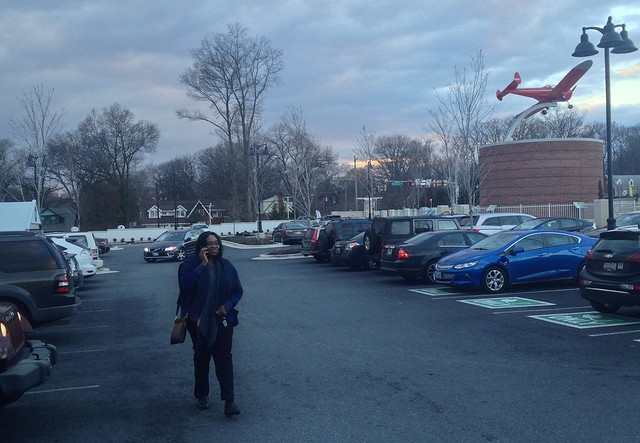 My soundscape demonstrates economic dimensions. At WF, the droning sounds of vehicles’ tires on Route-1, “vrooming” of engines starting, beeping of car openers/locks, slamming of doors, whirring of tires, clinking of keys dangling, purring of engines as drivers waited, harsh clattering of grocery carts’ wheels on asphalt tarmac outside,  and humming of wheels on smooth tile inside evoke feelings of economic prosperity. The car sounds suggest WF’s has high-standards of infrastructure, and mean WF’s clientele live in a developed country of higher economic standing than my African sound memories. The lack of advertising and haggling voices suggests items of fixed-prices are sold. High-pitched beeping carts enable disabled shoppers. High heels snapped the tiles, while black boots with gold studs crunched for attention on the leaves. WF’s shoppers can afford nice shoes. 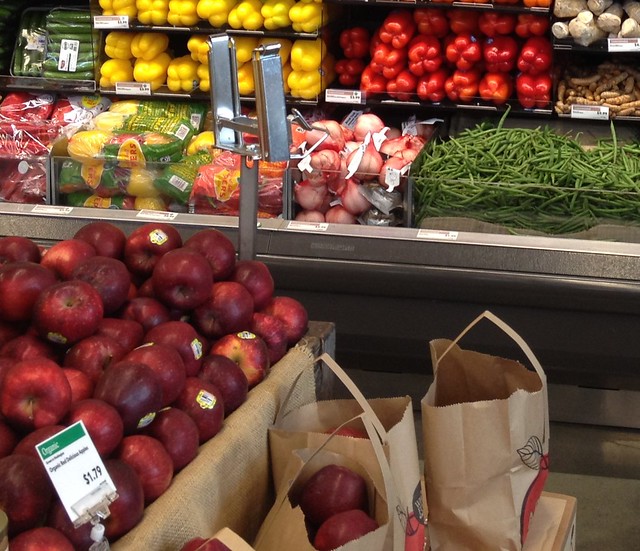 Car sounds demonstrate that WF may not be frequented by customers who do not own cars. While it has arrived at an opportune time to alleviate a ‘food desert,’ it might be inaccessible to lower-income residents, either due to high prices and/or due to transportation inconveniences. I never saw people arrive via bus/shuttle; the whooshing wind was bitter cold. 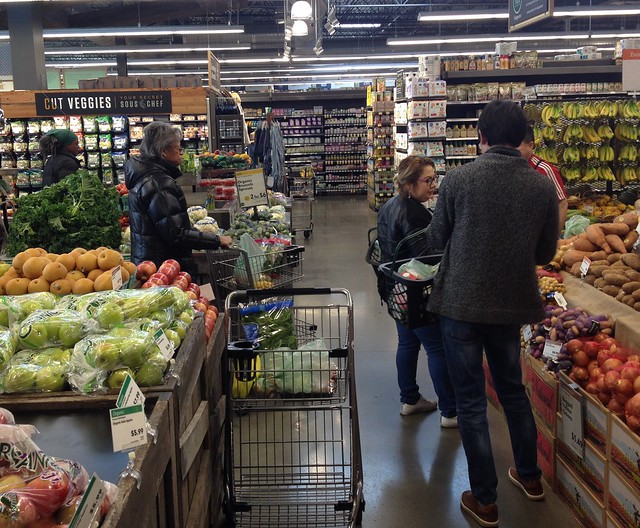 The social dimensions of my soundscape demonstrate that WF is frequented and staffed by people of various ethnicities. While most customers were speaking English (which sounded casual, without crispness, and lacking precise enunciation of words), a grandmother was speaking to her grandson in African American English, and a couple were excitedly discussing in staccato Cantonese/Mandarin which vegetables to purchase. Two Latina staff spoke Spanish in a sing-song tone to each other and a female customer. The baby babbling to his grandmother, the young kids calling after their parents (whose mother talked in professional tones on her cell), the older lady’s rubber walking-cane stand’s dull tapping, and the teenager whispering to his mother about the organic strawberries suggest all generations frequent WF. The sounds of country music, then hip-hop, and customers smacking their lips while sampling cheese and berries next to the rustling paper bags of apples transform people’s shopping trips into expeditions of entertainment and surprise.