Posted June 29th 2017 at 5:00 pm by Leigh Carroll
in Schools and Implications for Urban Planning

Should planners care about schools?

I’m a city planner in training and intended to write my master’s thesis on the relationship between schools and their surrounding neighborhoods, and how schools can use more place-based approaches to contribute to community visions. My research ultimately changed, and I’m using this blog series to share some interviews that did not end up in my thesis. I begin with this first post that shares some of the questions that motivate my interests in the connections between education and city planning.

Can schools be community-serving institutions? 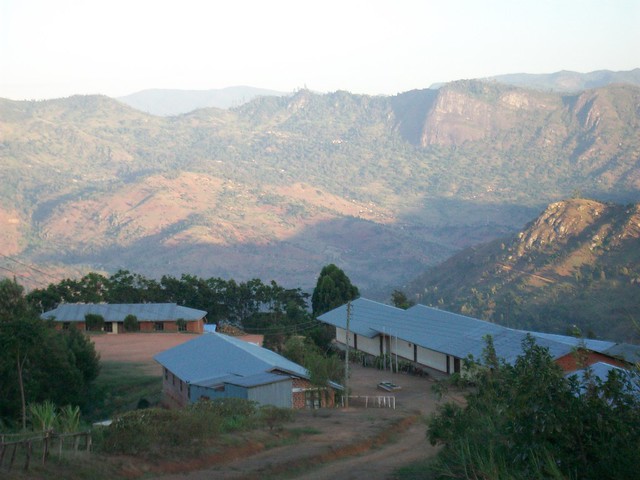 Going from home to school in Mbelei, Tanzania.

After college I moved to Mbelei, a rural mountain village in Tanzania, to teach science at the local high school. When students came to school, they brought remains from the butcher to dissect in biology class and battery acid from the car shop to titrate in chemistry class. Yearly national exams constricted the curriculum, yet students’ curiosity about local phenomena still fostered a creativity that did not merely conform to school requirements.

One thing I learned there that has always stuck with me is that Julius Nyerere, Tanzania’s first president, intentionally built public schools on the borders between tribes. In the newly independent country, Nyerere saw schools as a place that could break down tribal barriers as children befriended each other before negative tribal stereotypes had taken deep root. Nyerere viewed schools as a place where youth could lead the cultural bridging process in their communities.

While Nyerere viewed schools as institutions that should instill a culture of serving one’s community and country, the U.S.school system is in practice often one that primarily serves individual gain—it rewards us for good grades and obtaining the skills that will help us to climb the career ladder, regardless of what happens to our peers. Nyerere, speaking of his vision of education, noted that the colonial education inherited by his country (which resembles ours) “emphasized and encouraged the individualistic instincts of mankind, instead of his co-operative instincts. It led to the possession of individual material wealth being the major criterion of social merit and worth.”

Schools have the potential to be multidisciplinary, multicultural, intergenerational think tanks that could do much more to serve their local communities.  The youth that attend school daily know the local context in intimate detail, and the adults who teach there are (or could/should be) well-versed in theory and knowledge of a variety of subjects. How then could planners and other civic leaders partner with students and staff in public schools so that they serve the community as the intergenerational think tanks they are already resourced to be?

What should schools measure to build toward the futures we want?

Viewing schools as community-serving institutions will require us to drastically rethink the purpose of schools and how we measure their success. The school I went to growing up was a small public school right outside of Pittsburgh, PA. The school doesn’t glow according to the test scores; in fact, I recently heard that it was ranked in the bottom 15% of schools in Pennsylvania according to the state assessment exams. This has a toll on the community, which already struggles to attract residents and generate higher tax revenue. 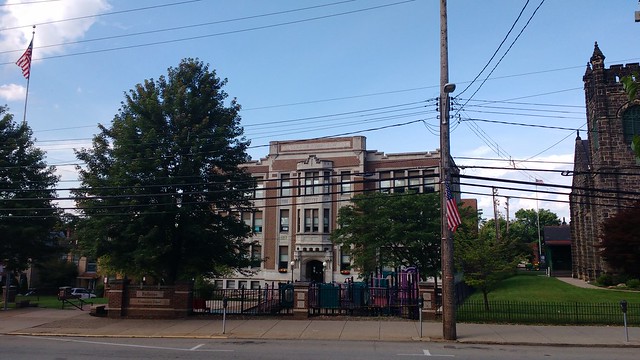 Bellevue Elementary, the school I went to growing up.

Though by official measures the school is not successful, residents and high school students I spoke with for my thesis research said things like, “I hate when people bash on [our school] because I love it here and I really do feel like we have one of the best student bodies” or “When somebody else comes in we invite them in and make them part of our group. So that they don’t feel out of place here” or “This is the most diverse school I’ve ever been to.” Students and residents of various races and socioeconomic backgrounds valued the school’s ability to nourish people from different backgrounds, races, income levels, and nationalities.

One of the conditions that allows students at this school to build a diverse solidarity (which I discuss more in my thesis) seems to be the community’s ability to resist levels of materialism and class consciousness present in neighboring city and suburban districts. The students also discussed at length the ways in which their school provides opportunities for them to build friendships with students of different races, helping them to develop social accountabilities that strengthen their resolve to stand up against racism and prejudice in daily life.

These characteristics of the school are not shown off in school rankings or awards programs, but the school’s ability to foster relationship and accountability across race and class seems to me just as, and perhaps more so, important than an individual student’s math scores. If we truly value relationships and community, and want to resist materialism, nationalism, and the individualist mentalities that divide us, we probably need to reassess whether our education system truly supports and rewards schools’ efforts to do this.

Is our problem pedagogical shortcomings or just plain racism?

We spend so much money on education innovation and strategy, but sometimes I wonder if most failings in our education system could be solved if we refocused this effort on anti-racism work. It seems that the underlying problems of racism that segregate and stratify our school systems are at the root of most education shortcomings.

At the institutional level, many education-related policies have racialized effects. For instance, local tax and school financing policies leave schools in low-income communities and many communities of color underfunded. (For more examples of the ways in which policies, institutions, and cultural practices reinforce racism in our education system, see Jennifer L. Hochschild and Nathan Scovronick’s The American Dream and the Public Schools; Theresa Perry, Claude Steele, and Asa Hilliard’s Young, Gifted, and Black; or other books on this topic.)

Resegregation of schools due to white flight (whether based in racism or search for better social services elsewhere) is another race-related educational problem. In American Metropolitics, Myron Orfield writes that an analysis of elementary schools in the 25 largest US regions indicates that “once the minority share in a community’s schools increases to a threshold level (10 to 20 percent), racial transition accelerates until minority percentages reach very high levels (greater than 80 percent).”

And as many people who experienced being bused to majority white schools can attest to, intentional integration without addressing the deep wounds of racism does not work well either. In her essay Chitlin Circuit, bell hooks shares her experience with school integration, writing that “I sat in classes in the integrated white high school where there was mostly contempt for us, a long tradition of hatred, and I wept.…I wept and longed for what we had lost and wondered why the grown black folks had acted as though they did not know we would be surrendering so much for so little, that we would be leaving behind a history.”

This all leads me to ask—might our education systems be better served if we shifted the money and effort we put toward educational innovation into explicitly addressing institutional and interpersonal racism (for example, toward advocacy for more equitable school financing or more honest history curricula)? To a large extent, we already know how to do education well – students in wealthy, often white, schools often have exceptional learning experiences. Many foundations and corporations fund classroom technology or pedagogical research as if breakthroughs in these areas will solve our education problems, but I wonder sometimes if this is chasing a red herring.

These questions are several of those that motivate my interest in the connections between schools, city planning, and civic engagement. In my next post, we’ll hear from Brian Barnes, who is interested in how to strengthen community leadership to hold schools accountable to local visions of youth development.