A Soundwalk in Portland Maine 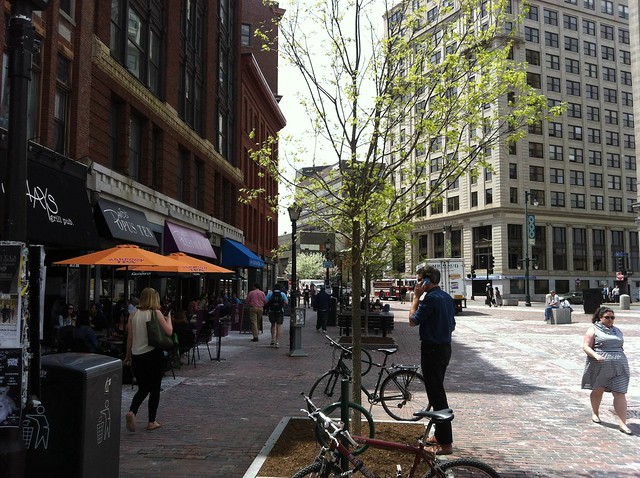 Named one of the American Planning Association’s Great Places in America, Portland Maine’s Congress Street is the backbone of the city peninsula, a hub of commercial and cultural activity and a major transportation corridor. I walked the street early on a sunny Friday afternoon. The section I covered begins at Monument Square, which functions as the city center, and runs west on a slight incline to a large intersection bordered by the Portland Museum of Art and Congress Square Park (this park recently received a $100,000 placemaking grant after a citizen movement successfully campaigned to save it from being redeveloped into a private ballroom). From the east side of the main square, I began my walk.

I noticed the sound of the bells of First Parish Unitarian Church ringing slightly out of phase with the sound of a large delivery truck in reverse. Proceeding up the street, I heard a street preacher’s voice come into earshot over the traffic; his exhortations were reinforced in my mind by the church bells. I crossed the square listening to a flurry of conversations around a hot dog cart and outdoor restaurant seating. At this point a canvasser crossed my path and called out to me, asking for signatures for a petition. I asked what sounds he noticed in the course of his job.

While the canvasser mentioned most of the same sounds I was noticing, he interpreted them in a sort of competitive framework. His attention-grabbing mandate gave the sounds a radically different meaning from what they meant to me, with my active listener’s hat on.

Continuing up the street, engines continued to dominate the soundscape, but from the building side of the street came sounds of a portable radio and someone’s keys jingling as they walked.

Homelessness and mental health troubles are very visible in downtown Portland. Several major shelters and social service agencies are located near Congress street. I stopped and tried to talk to a man who was sitting on the sidewalk and had asked me for some change. When I asked which sounds he noticed the most on Congress St, he simply replied, “my enemies”. Even more than the canvasser’s response, this reaction made me realize how subjective our experiences of sound can be. For those who hear voices or experience forms of psychosis, there may be a layer of sound that others don’t hear at all. 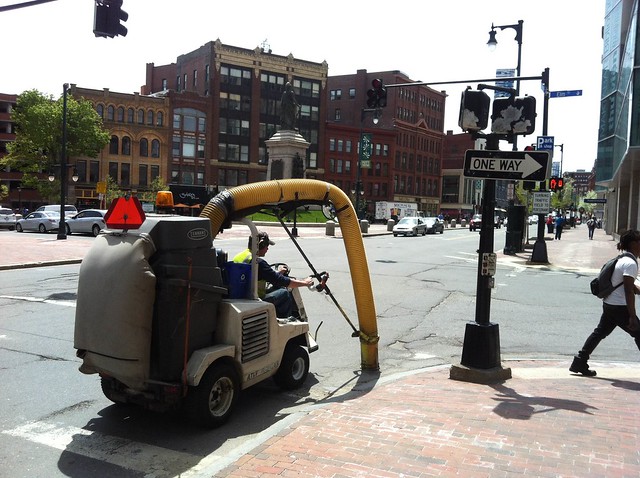 Having walked the busiest section until Congress Square Park, I paused to reflect on what I had heard. The three most constant sounds seemed to be those of the pedestrians’ conversations, the traffic, and the seagulls crying from above, indicating how close the ocean was. A layer of secondary sounds: music, either from radios or buskers; construction sounds like hammering or power tools; loud conversations; the needle from a tattoo parlor filtering out from a small second story window; all of these periodically punctuated the ambient noise.

I spoke with two older men sitting on a bench. One of them had headphones on and said he liked listening to music like The Rolling Stones, but not so loud that he couldn’t hear the other sounds around him. The other commented on how abrasive the sound of traffic was, especially large trucks or sirens, but said he thought the sounds of older car engines used to be worse than modern ones. As we talked we all noticed the sound of a flute player down the street. The high-pitched instrument floated above the low tones of the vehicles. We also recalled a local character who we dubbed ‘the whistler’. His loud atonal whistling announces his presence around town; infamous, he has become synonymous with the sound he makes. 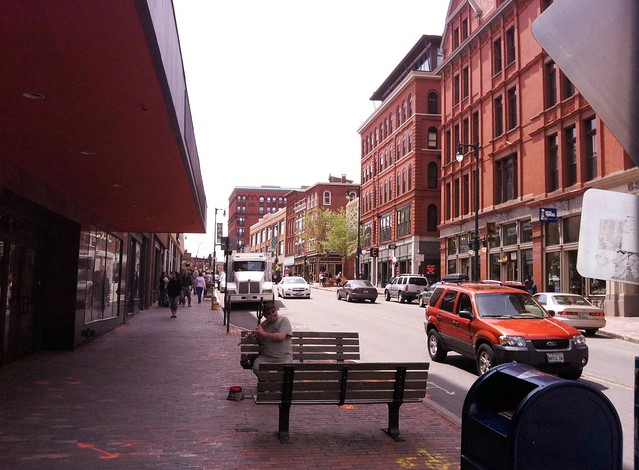 On my way back I decided to talk to the flutist. He mentioned a sound that I hadn’t noticed at all: the wind. Sure enough, listening to my recording later, the wind is very audible. I feel it all the time on this street. It’s almost as constant as the traffic; sometimes blowing dust into one’s eyes. But I had always filtered its noise out, like recordists who put a windguard on their microphones.

Looking back on my walk, I’m struck by how people’s roles and subjective experiences affect both which sounds they notice and their significance. Competition, paranoia, active listening, expressive performance: all these lenses bring attention to different things in the soundscape. Each of the public realm actors I encountered had created their own ‘mix’. Some added a personal soundtrack like a Rolling Stones song heard through headphones or involuntarily conjured voices of delusion. Others crafted a score for passersby to hear, like the flutist’s song or canvasser’s voice.

As I walked home, I kept thinking how beautiful it was that the only person who mentioned the sound of wind was the flutist, who made music with it.

This is one of many posts where CoLab Radio contributors take readers and listeners on a soundwalk in their city. If you’d like to submit an example from your own city, see the easy steps here.