Posted October 24th 2014 at 12:04 pm by Piotr Rajchert
in Perspectives on Current Events 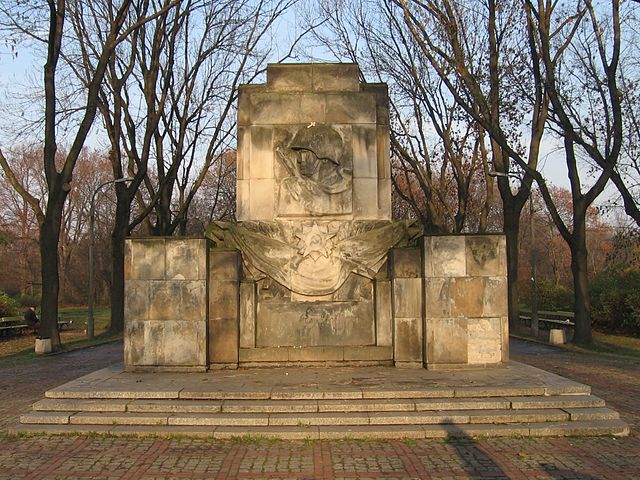 On sunny days many people enter Warsaw’s Skaryszewski Park through the George Washington Roundabout walkway. The park – on the Praga side of Poland’s capital – is a natural idyll in an urban setting. On its more than 120 acres, forests, meadows and tucked away lakes allow children to run and play and adults to simply walk and be together with friends and family or alone inhaling fresh air.

Visiting the park with happy thoughts on their minds, the visitors ignore the enormous Soviet war memorial to Red Army soldiers who died battling the German military in the September 1944 siege of Warsaw. The memorial is made from concrete and shaped like an altar. It is several meters tall and has on its facade the relief of a soldier’s face in profile below which one finds fallen flags folded into each other like shrouds. In their center is a representation of the star-shaped Order of the Great Patriotic war. The whole design is faded and in the process of disappearing. Last year when I inspected the memorial on a walk with my family I found weeds growing from its summit.

To many Poles, The Skaryszewski Park Red Army memorial is a reminder that the Union of Soviet Socialist Republics liberated Warsaw from the Germans only to occupy Poland for the next 40 plus years. In collusion with locals, the country subjected Poles to a Communist dictatorship that they had never wanted. Those decades of Soviet control were a time of oppression, poverty, and fear.

When earlier this year Russia swiftly annexed the Ukrainian region of Crimea and unleashed instability through armed conflict in eastern Ukraine, Poles shivered with familiarity and Poland offered immediate support to its neighbor. We understood all too well what Russian invasion and control are all about. We had joined NATO and the European Union in part at least to escape Russia’s sphere of influence and develop in a more democratic way.

But as much as I disagree with the politics of Russia’s President Vladimir Putin, I cannot help but admire and be fascinated by Russian culture. I think back to a photographic album of Moscow that my mother has in her study in Warsaw. One of the pages features a reprint of Andrei Rublev’s Holy Trinity icon. Rublev painted it around 1410. The image draws me in with its intimacy and the world of faith that it represents. Russian music has influenced my life too. I remember as a 20-year-old listening to a number of Dmitri Shostakovitch’s compositions for the very first time on a CD that I had purchased in an independent music store in Quebec City. The forceful notes dancing in my ears captured the lives of Soviet citizens working as their country rapidly industrialized around them. And then there is Russian literature: Nabokov, Dostoevsky, Chekhov and so many others created characters and stories that have delighted my mind and enriched my understanding of what the human experience is all about.

Russia’s culture enriches the soul but it does not percolate into the Kremlin’s halls of power. Their power is about control and not about people meeting each other and recognizing their common humanity as art often facilitates. The vast majority of Ukrainians, Russians and Poles, I am betting all want the same thing: health for their families, shelter, nourishment, and a purposefully-led existence. Even many of the young Soviet soldiers who repelled the Germans out of Poland during World War II and then occupied the country most likely weren’t ideologues but people caught up in history. They too wanted to be home with their families living safely and happily. The question before us now then is how do we communicate to Vladimir Putin that hunger for power and control does not make the people of a country happy? It does not improve the quality of their lives or create a sense of stability about the future. Unfortunately, happiness of the Russian people is likely not something about which Vladimir Putin thinks.