I am obsessed with swarming right now.

One of my favorite chapters in one of my favorite books, Resilience: Why Things Bounce Back, is about swarming (thanks Curtis). Swarming is the process of a group of creatures changing behavior for a short period of time to achieve a particular, urgent goal. Think bees when they’re looking for a new home or ants when their home is attacked. All of the buzz around Adrienne Maree Brown’s Emergent Strategy has reminded me how much I love the idea of biomimicry (aka biomimetics) and given the state of the world these days (a world defined by VUCA), I’ve been thinking a lot about flexible infrastructure. Sure, we need stable organizations and institutions to keep systems functioning well (maybe), but it seems to me that our capacity as a society to gather quickly and align when necessary is… underdeveloped. 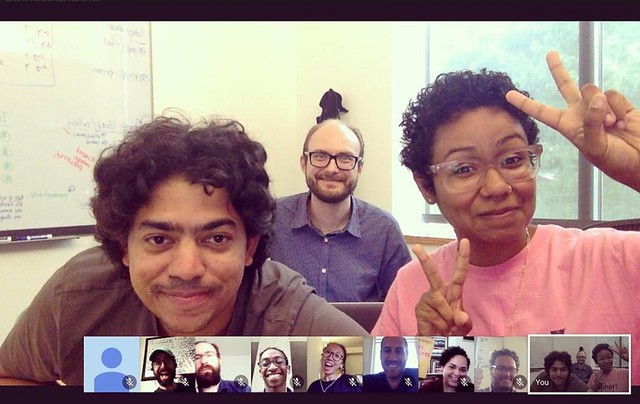 I joined at the invitation of a new connection, Sharon de la Cruz, at the Princeton StudioLab. I was excited to participate because the book (Mindstorms, available for free from the Media Lab) seemed really interesting and the people who’d be interested in it I imagined would be people I’d like to know. As we got into it, I started to see a huge amount of potential, both in the structure of the book club and in the content of the book itself.

As far as the content itself, Papert (author of the book and co-founder of the MIT Media Lab) had two insights that stuck out to me. First, that learning is most effective has when it is not only culturally relevant but integrated into cultural structures:

“…at the core of the famous carnival in Rio de Janeiro is a twelve-hour-long procession of song, dance, and street theater. One troop of players after another presents its piece. Usually the piece is a dramatization through music and dance of a historical event or folk tale. The lyrics, the choreography, the costumes are new and original. The level of technical achievement is professional, the effect breathtaking. Although the reference may be mythological, the processions are charged with contemporary political meaning.

The processions are not spontaneous. Preparing them as well as performing in them are important parts of Brazilian life. Each group prepares separately—and competitively—in its own learning environment, which is called a samba school. These are not schools as we know them; they are social clubs with memberships that may range from a few hundred to many thousands. Each club owns a building, a place for dancing and getting together. Members of a samba school go there most weekend evenings to dance, to drink, to meet their friends.

During the year each samba school chooses its theme for the next carnival, the stars are selected, the lyrics are written and rewritten, the dance is choreographed and practiced. Members of the school range in age from children to grandparents and in ability from novice to professional. But they dance together and as they dance everyone is learning and teaching as well as dancing. Even the stars are there to learn their difficult parts.

Every American disco is a place for learning as well as for dancing. But the samba schools are very different. There is a greater social cohesion, a sense of belonging to a group, and a sense of common purpose. Much of the teaching, although it takes place in a natural environment, is deliberate. For example, an expert dancer gathers a group of children around. For five or for twenty minutes a specific learning group comes into existence. Its learning is deliberate and focused. Then it dissolves into the crowd.

In this book we have considered how mathematics might be learned in settings that resemble the Brazilian samba school, in settings that are real, socially cohesive, and where experts and novices are all learning. The samba school, although not “exportable” to an alien culture, represents a set of attributes a learning environment should and could have. Learning is not separate from reality. The samba school has a purpose, and learning is integrated in the school for this purpose. Novice is not separated from expert, and the experts are also learning.”

Second, I saw the use of temporary learning environments where it’s ok to be wrong for a time. I’m paraphrasing here, but Papert (p. 132 – 133) essentially notes that the way young children learn is by observing, creating theories, and then operating with those theories until they are disproven. Therefore, when we can create moments in time (microworlds) that allow people to practice their theory-building muscles, we support learning in the way that it really happens, not just the way our educational system tells us that learning happens:

Our educational system rejects the “false theories” of children, thereby rejecting the way children really learn… Piaget has shown that children hold false theories as a necessary part of the process of learning to think. The unorthodox theories of young children are not deficiencies or cognitive gaps, they serve as ways of flexing cognitive muscles, of developing and working through the necessary skills needed for more orthodox theorizing.

Piaget asked preschool children, “What makes the wind?” Very few said, “I don’t know.” Most children gave their own personal theories, such as, “The trees made the wind by waving their branches.” This theory, although wrong, gives good evidence for highly developed skill in theory building. It can be tested against empirical fact. Indeed there is a strong correlation between the presence of wind and the waving of tree branches. And children can perform an experiment that makes their causal connection quite plausible. When they wave their hands near their faces, they make a very noticeable breeze. Children can imagine this effect multiplied when the waving object is not a small hand but a giant tree, and when not one but many giant trees are waving. So, the trees of a dense forest should be a truly powerful wind generator.

What do we say to a child who has made such a beautiful theory? “That’s great thinking, Johnny, but the theory is wrong” constitutes a put-down that will convince most children that making one’s own theories is futile. So, rather than stifling the children’s creativity, the solution is to create an intellectual environment less dominated than the school’s by the criteria of true and false.

These two points lead me to think about Papert’s microworlds as a useful learning structure… and then I realized that the interactive book club itself was a microworld… and it was a swarm… And that’s when all my thoughts collapsed in on themselves, ha! But seriously…

The value of these temporary learning groups seems huge. For me, it was amazing to only spend an hour of synchronous time a week for only five weeks, learn so much, and make so many connections. The discussions were unbelievably interesting and people referenced so many other things that I have a list of 10 ideas and books I need to research further (example: this amazing debate between Papert & Freire). And all of this happened without a forum or email list!

Is there a place for longer-term learning engagements? Obviously. But this type of swarming capacity seems like it could be limitlessly useful, particularly after people leave formal education systems. And in this particular moment, I’m especially thinking about this book club structure as it relates to things like Charlottesville where a lot of people need to get educated on a lot of history quickly.

Of course, none of this “new.” There have been short-term classes offered in many different contexts that are only a few hours a week for a while. What feels important to me to play with at this moment is how the structure is deployed to achieve current goals. This feels so important to me that I think I’d like to play with another deployment of this structure again (maybe even in the next few weeks…). Stay tuned…

PS – Some of the responses people had in the class were amazing! Some folks did code exercises (like Sharon and Eliza and Aatish and Guillaume) and others wrote publicly (like Eliza and me).