Posted March 1st 2017 at 8:00 am by Lawrence Barriner II
in Telling Your Story Online

Telling your story online through your portfolio 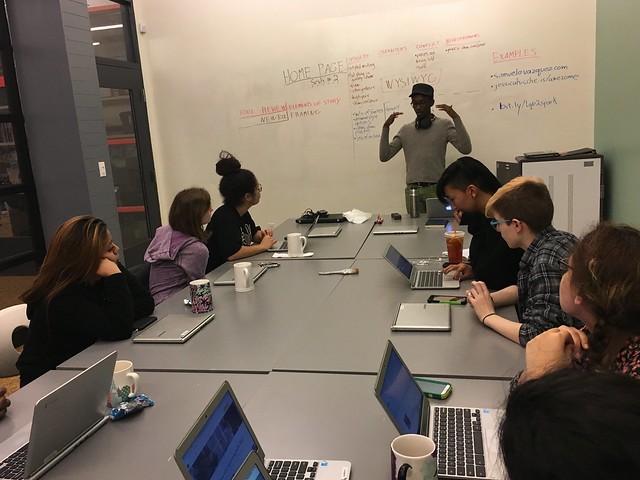 Friday, Jan 27th was session 2 of the Home Page workshop series happening at Raw Art Works (RAW). The goal of the series is to support several young artists from the organization in creating online portfolios. I’m hoping that they also learn about narrative strategy and how to tell their stories effectively and strategically.

We began with two quick lessons. First, we reviewed the elements of story (shoutout to Center for Story-Based Strategy!) from session 1. Then I did a very brief introduction to framing, focusing heavily on what’s in the frame and what’s not. Then we did a quick activity where we used the two tools to examine two different stories from the Citizen’s Handbook. Feel free to examine the two stories and see how the elements and framing differences between version 1 and 2 change the meaning of the story. Note: during the activity, I shortened the second story because we were tight on time.

An infant left sleeping in his crib was bitten repeatedly by rats while his 16- year-old mother went to cash her welfare check. A neighbor responded to the cries of the infant and brought the child to Central Hospital where he was treated and released in his mother’s custody. The mother, Angie Burns of the South End, explained softly, “I was only gone five minutes. I left the door open so my neighbor would hear him if he woke up. I never thought this would happen in the daylight.”

An eight-month-old South End boy was treated and released from Central Hospital yesterday after being bitten by rats while he was sleeping in his crib. Tenants said that repeated requests for extermination had been ignored by the landlord, Henry Brown…

After our bit of practice with the elements of story and framing, we tried using the tools on some actual artist websites. The group had about five minutes to check out the artist websites of Samuel Vazquez and Jessica Hische, two artists who inspire me. Then we dissected the sites using the elements of story and discussed how the chosen elements might impact how viewers perceive the artists.

Finally, it was time to start playing around with actually making websites. The activity I thought up was to create a website (using Adobe’s new WYSIWYG website building tool, Spark) that told a story about you as an artist using at least two photos of your work and two sentences. Käthe provided each artist in the workshop photos of their work to use on their pages. 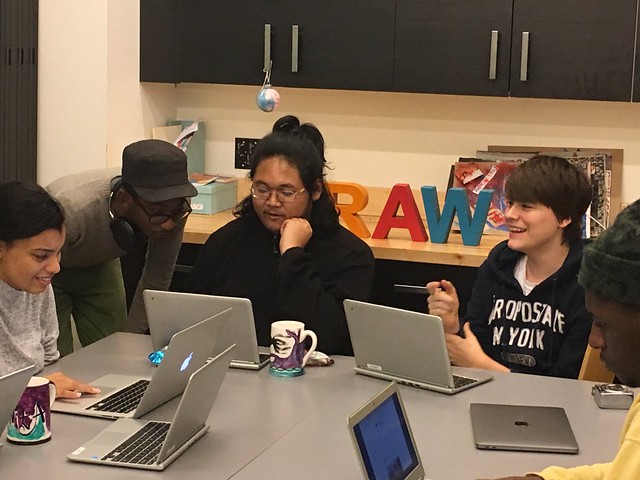 As everyone got logged into Adobe Spark and started working, it became clear pretty quickly that playing around in Spark was going to take priority over the assignment. A check-in after 15 minutes confirmed that the task had taken a full backseat to experimentation and exploration. Although I didn’t expect it, it was definitely better that way and everyone seemed to be getting really into it! Instead of exchanging URLs to see if the stories each person tried to tell was clear, we did a little housekeeping, had a brief wrap-up conversation, and then just let everyone keep working until the time was up.

The takeaways from this workshop were:

Over the next few weeks, the artists will have weekend sessions with at least one other course instructor, Cindy Sous, a UX Designer and RAW alum, to dive deeper into building websites. After those sessions, I’ll lead a final session about how to do a narrative power analysis and then craft a compelling collective narrative using elements from the stories of multiple individuals.

I’m feeling pretty excited about this work and I’m looking forward to that last session where we’ll work together to understand how to craft compelling narratives that combat problematic dominant narratives (like the ones our current administration is putting out regularly)! Stay tuned for the final writeup!