Posted September 9th 2014 at 9:15 am by Victoria Ibezim-Ohaeri
in People Matter: The Human Impacts of Planned Redevelopment

The Agony of Displacement: Reflections from Nigeria 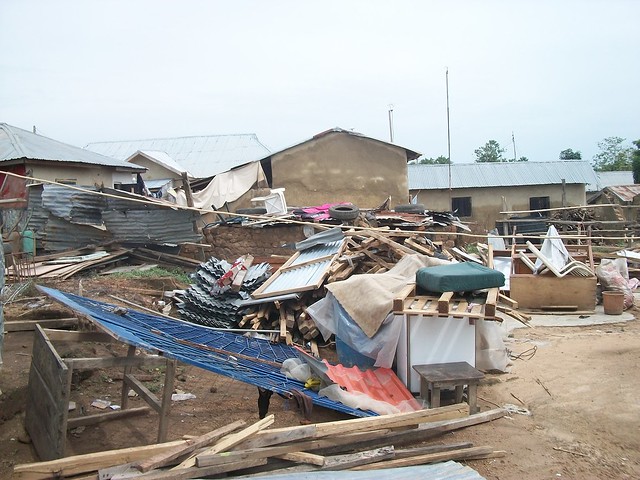 Properties of families displaced for the construction of military barracks in Abuja, Nigeria. Photo Credit: Spaces for Change.

The biggest casualties of these “development” schemes are the urban poor, who often live in areas designated as slums. With most of them having no legal title to their homes, translating into insecurity of tenure, they live in permanent fear of evictions. This fear is well founded: in Nigeria’s three biggest cities – Lagos (South-West, Nigeria), Abuja (North-Central Nigeria), Port Harcourt, (South-South, Nigeria), large-scale demolition of slum settlements and displacement of poor residents have occurred – and continue to occur – at a scale rarely seen elsewhere. The demolitions and evictions are executed with or without notice, without prior plans of resettling or compensating evictees, and without any rehousing plans.

The growing influx of people from the rural areas to the city centers continues to aggravate an already bad situation. The more cities attract more people from the rural areas, the more urban centers continue to be theaters of the poor’s struggle to assert their rights to have a roof over their heads. Worse still, urban population explosion is happening without counterpart investment in the provision of basic housing infrastructure and social services.

The eviction process usually begins with a big red “X” marked on targeted structures a few days prior to the demolition exercise.  Sometimes eviction processes are more clandestine. They begin as mysterious fires that raze dense slum neighborhoods at night, after which no investigations are carried out. Residents’ claims of customary title are habitually ignored and their structures are targeted anyway. City planners are famed for their deep resentment for public consultation and citizen engagement on matters relating to urban renewal. As such, it is unlikely that they will heed either judicial or public calls for restraint. Most of these evictions contravene constitutional and legislative prescriptionsthat protect all rights-holders against arbitrary seizures and takings by state and non-state actors. But weak regulatory, judicial and enforcement institutions frustrate or even obfuscate attempts to challenge impunity and secure justice for wrongful seizures.

Far from offering development benefits, forced displacements destroy the dwellings and settlements that people call home, leaving them in conditions worse off than they were before the evictions. The resulting homelessness devastates communities, disintegrating their communal and social ties, and further compromising their realization and enjoyment of human rights, specifically the rights to housing, health, education and to work.

Instrumentation of a code of universally binding ethics deploring official behavior that hurt citizens isn’t just enough. The majority of countries that routinely tear down the homes of the poor have ratified a plethora of international treaties, declarations and conventions that prohibit these practices. Yet, accountability for these injustices lag. To effectively overturn the pain and agony forced displacements evoke, moving away from the formality of rule making and the symbolism of ratification are not just imperative, but long overdue.

Victoria Ibezim-Ohaeri is the founder and Executive Director of Spaces for Change, an organization that works with youth and communities to discover and activate their potential to lead and hold leaders accountable in Nigeria.