“I was tired of making criticisms, of writing about what could be in my city,” said Giorgos Toulas, Editor-in-chief of the most well known magazine in Thessaloniki, Greece. “After twenty years,” he said, “it was time to take action, to show by example what could be done.”

Twenty-five years ago, Mr. Toulas founded Parallaxi Magazine in his hometown – a beautiful city that spreads east and west along the top of the Agean Sea. Thessaloniki boasts two film festivals and a Photography Biennale each year, among other festivals. The restaurants are relentlessly good, the museums excellent, and the people friendly.

But in Thessaloniki’s troubled west side, shops have closed and public parks have become drug dealerships. The deep Greek recession has devastated a neighborhood that was already on the decline. One neighborhood within the West Side, Xyladika, teems with men looking to pay cash for sex each night. By day, it’s nearly a void for economic and social activity.

It is in this neighborhood that Mr. Toulas began his second career as a public space and cultural planner, never abandoning his first career as a journalist. Greater Thessaloniki boasts a population of over one million, and journalists often are well-connected, well-informed people. For Mr. Toulas, the vast knowledge he had assembled on his city added up to a vision.

Mr. Toulas created Thessaloniki Allios, which translates to “Thessaloniki Differently,” or “Thessaloniki in a Different Way.” He formed a team of eleven young architects and artists, and other professionals representing the many diverse career types that comprise the amalgamated field of “City Planning.” Together they began planning and executing small projects on a volunteer basis.

Meanwhile journalists at Parallaxi Magazine cover each project, providing transparency from beginning to end. The public knows about, and can join in on, any project.

Last summer, Thessaloniki Allios organized a two-day outdoor arts festival in a neighborhood in which the ground floor level of nearly every building is vacant. Dancers made a stage of the street, waltzing up to a crumbling old building and rapping on its wall, only to receive no response. All the dancers banged on the wall of this empty building, asking it to be something. They fell backwards into the street.

Across a highway that cuts through the neighborhood, the artists put on a late-night play in the yard of the city’s former passenger rail station. Everyone in Thessaloniki knows that nearly 50,000 Jews were forced on trains and shipped directly to Auschwitz from this train station in 1943. Those Thessalonians who are old enough to have witnessed it remember the scene, and often remain traumatized by their memories.

Mr. Toulas, with permission from rail yard managers, made a thoughtful evening theater in this site. During the day, the city’s premier graffiti artists painted murals on the train station walls. One of them was a street art-style memorial to Holocaust victims – rows of ghosts in concentration camp uniforms. 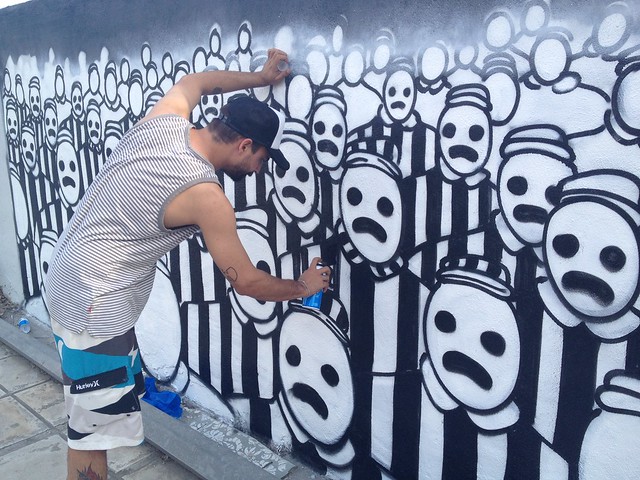 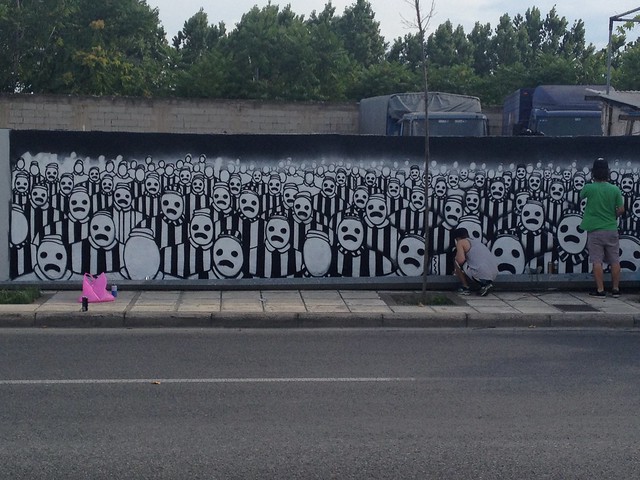 Watch this video of the two-day event, and imagine it taking place in the most economically drained place you have seen:

The trouble is, after the event was said and done, there were only three murals along the old train station walls. There is space for thirty or more murals. Mr. Toulas would like to see the whole wall painted. So would the neighbors. The city’s street artists would like to do the work. But it’s an uphill climb to get anything done in a recession so deep.

And now Mr. Toulas’ Thessaloniki Allios team – eleven young professionals – has dwindled to five. Six have left Greece for other European countries because they could not find work at home. Those still living in Thessaloniki often work more than 60 hours a week. Many employed Greeks are working long hours, often at less pay. The fear of unemployment is one factor, and national pride is another.

Mr. Toulas keeps long hours, driven by a profound and unshakable love for his home. He smarts when he talks about the state of the Greek economy, which he predicts will get worse before it gets better.

He counts one failure among his otherwise successful series of public space projects. He and his team tried to make a public park on city-owned lot. Someone had been squatting on the lot, charging people to park there.

He knew the parking operation was illegal, and convinced the city to let him restore the lot to its rightful use. An architect drew up a design for the park. His vision was to employ used tires to create tiered gardens, and winding paths between the gardens. With donated materials and volunteer labor, they built the park. The Thessaloniki Allios team knocked on neighbors’ doors, inviting them to join in. But few of the locals joined, and the city never reconnected the lot to the municipal water supply, making it impossible to water the plants. Within months, the park fell into disrepair. Today it looks like this: 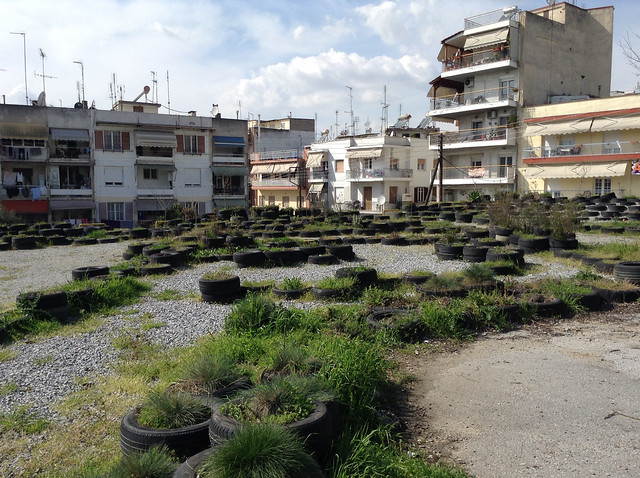 Mr. Toulas, who is without his core team and has no assurance that the city will keep up the lot, is not without hope. He’s looking for a new strategy to revive the park this summer.

In transitioning from someone who writes about his city to someone who takes action in his city, he counts three lessons learned: