Posted February 11th 2015 at 10:48 pm by Lillian Jacobson
in Drawing Outside the Lines: Community-Based Design in Unincorporated Communities

The Language of Design: Model Building and Community Change

This is the fourth post in Drawing Outside the Lines: Community-Based Design in Unincorporated Communities, which chronicles a series of design workshops (“Visioning Sessions”) with high schoolers in an unincorporated area outside of Santa Rosa, California. Read about the history of this community here.

In this final session, the main focus of the day was for the students to build physical models of their visions for their neighborhoods. In the previous session, students created an overall planning framework for their neighborhoods. For this session’s model-building activity, they zoomed in and chose specific sites to focus on. Some groups chose a single park, others focused on a stretch of road, or a few city blocks. They all began to think strategically and in deep detail about how their site should function and look.

The Importance of Advocacy

Before we dove into the model-building activity, I talked with them about the slow pace of implementation in bureaucracies, and the importance of neighborhood advocacy in getting things done. Multiple Sonoma County officials told me that there is money to complete projects in Moorland and other unincorporated areas, but these projects need to be made a priority. To encourage the students to engage in advocacy, I handed out lists with the contact information and websites of government agencies in both the City of Santa Rosa and Sonoma County. Their teacher, Lisa, was excited by this, and is going to have them pick an agency to contact and direct their advocacy towards. I think this is an important step towards empowerment and change. They already understand more than most residents about their political situation, jurisdiction, and annexation. Their voice on these matters can make a difference.

After this introduction, we transitioned into model-building. I gave each group a foam-core model base for their site, and a range of model-building materials. The previous day, I had spent most of my life’s savings on art supplies (I have a hard time controlling myself in craft stores) because I wanted the students to have lots of options in representing their ideas. They certainly took to the challenge. They made light posts out of pipe cleaners and pompoms, built a skate park with a halfpipe made from foam, and some students went outside and picked up twigs to make tree trunks. I have to say, the models they built in an hour far surpassed my first model, which I spent a week on. 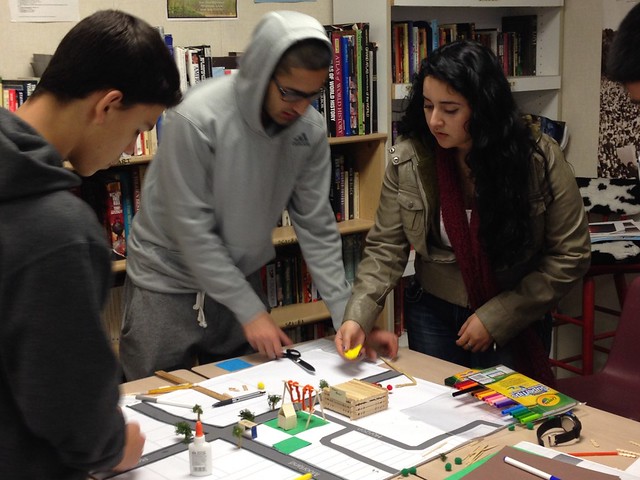 Students working on their model.

After they were done making the models, each group presented their ideas to the class. As usual, I was blown away by their work. I was especially struck by the astuteness with which they programmed their sites. They thought about how different uses interact with each other in order to help make a space more vibrant. One group put a homeless shelter next to a local business/job training center. “We put it right next to the shelter so that some of the people in the shelter can have an opportunity to find a job and get a head start to getting back on their feet,” explained Louis, a student in this group. Louis’ group also sited a daycare next to a community farm “not only so the daycare kids can learn to plant and farm, but also because it’s near the intersection so a lot of people can come and plant and work together.”

Another group built a youth recreation center next to a community center with classes for adults “where people can go learn art, maybe mechanics, or languages.” They explained: “We thought this was a good idea because a parent could go take a class while a kid is taking a sport next door.“ This group also added a bus stop to make the whole area more accessible. “If people can’t get there it kind of defeats the purpose,” they explained. 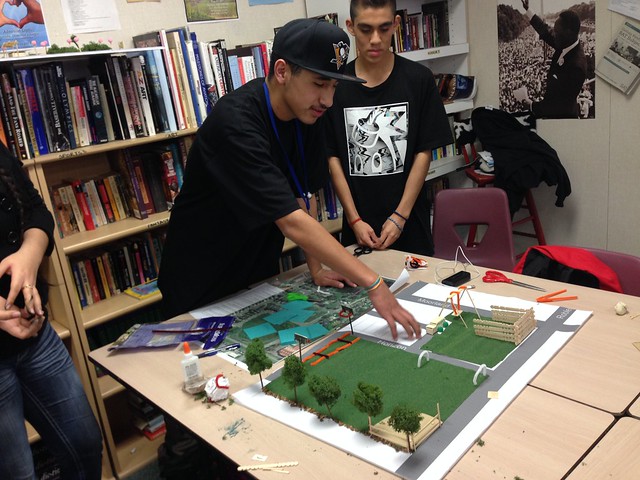 The Language of Design

Seeing them working together and putting so much energy into this project, I discovered something critical to my thesis: design itself is a tool that unlocks creativity and allows people to talk about difficult community issues. I am glad I taught the students technical planning vocabulary words, but the real language they learned, and needed, was design and visual representation. I have always believed that design should not be relegated to “experts,” and that community members should have a voice in the design process, but I never realized the importance of design as a mode of communication itself in a community process. The act of building and creating enabled the students to identify specific ideas for their community and to think about how those ideas would be organized spatially. 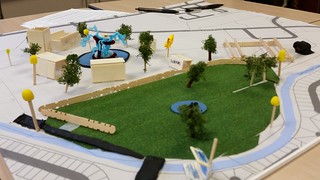 Student model of a park. 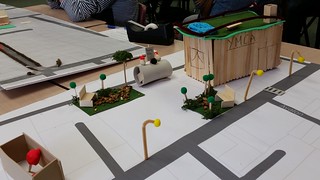 This outcome is much more meaningful for the participatory process than a laundry list of community priorities with no real vision. Because the high school students thought about how uses might work together to enhance each other, their ideas were more feasible. They will be able to present a more powerful argument when advocating for implementation. Lisa is going to organize an event where the students will show their models to community members, city and county planners, and elected officials. The idea for this event came to her in the middle of the students’ presentations when she saw how powerfully and effectively they had conveyed their ideas. Young people are rarely asked what they want to see in their community; so, if nobody is asking, they’ll just have to show us instead.