Posted December 7th 2017 at 1:31 pm by Piotr Rajchert
in The Politics of the Warsaw Cityscape

The Politics of the Warsaw Cityscape: A tale of two monuments

In 1944, at the tail-end of the Second World War, the retreating German army blew up Warsaw’s Royal Castle. The Castle was a centuries old symbol of Poland’s political independence, culture, and history. The army destroyed the building to inflict a psychic wound on an exhausted nation.

The Soviet-backed Communist government that held power in Poland after the War was not keen on rebuilding the Royal Castle. My parents grew up during the 1950s and 60s in Warsaw and recall toppled columns, broken fixtures, and tons of other detritus filling up Castle Square, as if frozen in time.

The Soviet Union used Warsaw to create a political imprint on Poland. In the early 1950s, less than a decade after the end of the Second World War, central Warsaw’s cityscape was vastly different from what it is today. Destroyed buildings waited to be cleared; many lots were already eerily empty. On others, workers scurried along scaffolding, eager to rebuild their city.

Politically, Varsovians (people living in or originating from Warsaw) and Poles across the country understood that Soviet-backed Communism was to be a reality in their lives for the foreseeable future. To symbolically remind the nation of this inevitability, Soviet leader Joseph Stalin sent thousands of workers to Warsaw in 1952 to build the Palace of Culture and Sciences. This 230 meter socialist realist tower with its decorative parapets, columned entrances, and other architectural fineries is somewhat reminiscent of the Empire State Building in New York. When it opened in 1955, the Palace began to serve the very practical purpose of providing space in a Warsaw that had a lot of rebuilding left to do. Containing a concert hall, countless conference rooms, a cinema, a museum of technology and other venues, the Palace seemed to embrace the realms of culture and science that are featured in its name. Today, the Palace is still Warsaw’s tallest building.

In January 1971, the government under the leadership of Edward Gierek had a change of heart and allowed for the reconstruction of the Royal Castle. Gierek had replaced Wladyslaw Gomulka as First Secretary in December 1970, after Gomulka had permitted soldiers to shoot at striking shipyard workers on the Baltic Sea coast that month.

The Royal Castle’s reconstruction became the nation’s project. Citizens like my Grandmother Fila donated a portion of their salaries to the rebuilding effort, which began in 1980. They felt proud of the Royal Castle returning to Warsaw’s cityscape. By 1984, this five-sided fortress with a domed central clock tower occupied its strategic perch above the Vistula River once again; five years later Communism ceased to exist in Poland.

These two monuments tell a complicated story about Warsaw’s continuing dialogue with its history. Having carried Joseph Stalin’s name early on, some find that the tyrant’s specter continues to hover above the Palace’s spire. Citizens’ groups have even suggested that the edifice must be torn down. Poland should not be reminded of her occupiers, this reasoning suggests. The demolition proposal, of course, carries with it an absurd cost.

No matter what the Palace’s provenance may be, I think that thousands of Poles have taken ownership of the building. They have met for dates at the Palace’s cinema; attended New Year’s Eve galas at its concert hall; listened to lectures and gazed at Warsaw from the observation deck on the thirtieth floor. They have in essence defeated Stalinism by living their lives on their own terms. There is no point in tearing the Palace down.

Today, tourists and school children visiting Warsaw queue up to tour the Royal Castle. The Castle is a symbol not only of Poland’s history but also of its resurgence after the Second World War. Each room in the castle holds a story connected to political events that affected Poland for better or for worse. The Throne Room with its gold and crimson walls stands in as a physical representation of the country’s regained sovereignty. Changing art exhibitions meanwhile turn the Castle into a cultural centre.

The Palace of Culture and Sciences is a 20 minute walk from the Royal Castle. The business district where the Palace is located with its office towers and suited workers morphs into a promenade of rowhouses, churches, and the campus of the University of Warsaw before ending on Castle Square and the Royal Castle. Crowds congregate here to socialize in cafes or to watch life go by. They have a loving relationship with the Castle that will never waver. The Castle is a part of who they are whereas the Palace was thrust upon them. It is physically imposing and perhaps even beautiful. Its very presence, however, will always be contentious. 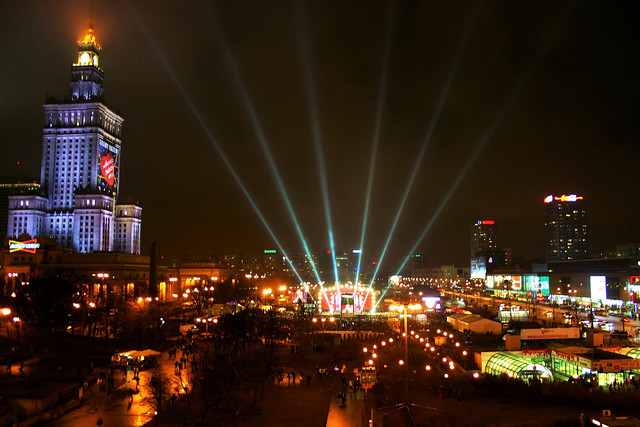 Note from the Editor:

This piece felt strikingly, surprisngly relevant given conversations in the US over the past few months about monuments to the Civil War, the conversation from the President to build a border wall between the US and Mexico, and popular reactions to state-sanctioned violence. I believe it would do our country, these United States, well to acknowledge what we can (and can’t) glean from the history of nations around the world.