Posted January 9th 2015 at 12:35 am by Sumiya Tarannum
in The Story Behind a Question: Using Storytelling to Further Community Engagement

The Power of Listening and The Question Formulation Technique 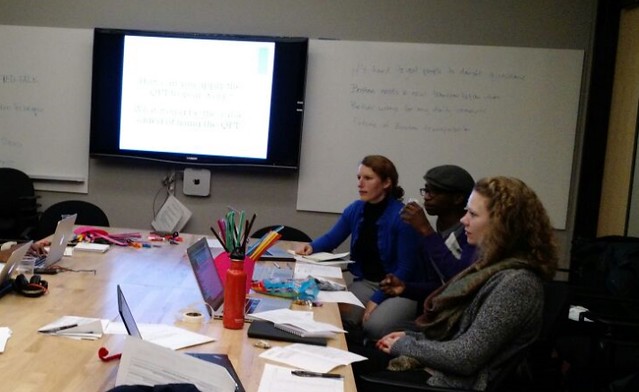 Day three of The Story Behind A Question was an intense session full of self-discovery for all of us. We practiced the important skill of listening and were introduced to the Right Question Institute’s Question Formulation Technique (QFT). I was delighted to discover that these two skills, deep listening and a guided process for asking many questions, can help in capturing the nuances behind a story.

We began the session with a brief reflection on our question collection experiences. Two of the things that most stuck out to our team was that the length of conversations and the use of particular key words helped when probing people to contribute a question to the Campaign. People opened up the most when we caught them waiting for something. We also found that the different contexts we met people in influenced the types of questions they asked. For instance, when I approached someone who had just gotten off her bike, the question she contributed was centered around biking.

After reflecting, we listened to the story of planet walker, John Francis. A staunch environmentalist, he was moved by the 1971 oil spill incident in California to stop using motorized vehicles. He wanted to encourage others to do the same and spent a lot of time arguing the righteousness of this decision. Over time he realized that his desire to convince was really centered around his ego. It was in that moment that he decided to take a vow of silence and just listen. This lasted for 17 years! During his years of silence he learned that paying attention to the environment was not just about focusing on nature but also the people around him. And so, in practicing deep listening he started learning from people too, not just nature.

As an acknowledgement of the power of listening we decided to respond to Francis’ story by using only one word to explain our feelings. My word was freedom. For me, the most compelling part about his story was the will power he possessed and his ability to let go of his ego, and remain silent in order to discover what his surroundings had to teach him. His story urged me to get out of my comfort zone, explore and make a change.

After practicing ‘just listening’ to the life story of another workshop participant, Marcy Ostberg of The Right Question Institute walked us through a powerful tool called the Question Formulation Technique (QFT). She used this simple tool to motivate high school students in Bluefields Nicaragua to think through the magnitude of the waste problem in their community and inspired them to think and take action on the concerns that mattered the most to them. This process inculcated a sense of ownership amongst the participants.

Marcy quickly guided us through the Question Formulation Technique’s steps for helping people to formulate the ‘right questions’: (1)produce- as many questions as you can (in a group or individually), (2) categorize those questions as open or closed, (3) improve them by changing some closed questions to open ones and vice-versa, and then (4) prioritize them and (5) decide how to use them.

Though this process looks simple, it encapsulates a lot of intellectual work, including divergent, convergent and metacognitive thinking. As such, the process can result in participants, thinking, feeling and behaving differently. It is however, challenging to scale, takes a fair amount of time, and sometimes can result in too many questions to process.

What is the perfect formula for generating THE right question(s)?

Using this process in an iterative way is definitely one way to get closer to asking ‘the right questions,’ whatever that may mean in one’s particular context, but going through the exercise helped me to realize that there really isn’t a ‘perfect formula.’ Nonetheless, I see immense possibilities in the QFT and am excited to use it in other community engagement processes that I intend to do in developing countries, including my home country, India. In India, changing peoples’ attitude and sensitizing them on serious community issues is a serious challenge. In this context, the QFT can be used to initiate and navigate meaningful conversations that might help people to think deeply and motivate them to take action.

We ended the session by each choosing one of the questions we collected that is especially interesting to us. These are the questions that we intend to tell the story behind. In our next session we will explore framing and the power of narratives. Stay Tuned!