A blend of sarcasm, friendly toasting and grounding in sharp truths, African- American humor is contextualized through a lens of shared lived experiences around being black in America and the legacy surrounding that.

Traditions like playing the dozens, from which ‘Yo mamma’ jokes hail, makes that clear. So too does a scroll through a black twitter hashtag, like #growingupblack. Full of scripts of conversations with mamas, memes about the process of doing hair that young black girls endure, and .gifs about discipline, the humor of black twitter can mimic a standup comedy show with the likes of Richard Pryor or Dave Chapelle.

It is no surprise then that a transmedia project currently in development called the Black Body Survival Guide, uses humor and satire in presenting a series of survival tips for black and brown bodies. The guide is a multi-media project that includes a book, survival tools, performance art, a survival online tv show and social media campaign. The Boston based creative hack lab for social justice, Intelligent Mischief (IM) is developing the guide. Their goal is “to validate how absurd racism in America is to black folks,” says Chrislene DeJean, one of the survival guide producers. 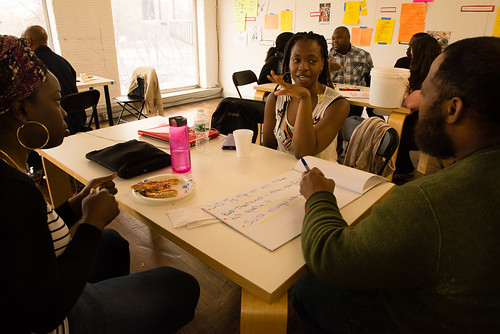 The process of creating the guide has been iterative, and collective. Terry Marshall, another IM producer, and Chrislene DeJean’s initial concept was to produce a book in a day through a hack lab model. In the space, everyone would contribute tips from their own experiences and that of other black people. A year and a half later, the process has benefited from being much more iterative than initially planned and has been informed by numerous hacking events, including sessions at the Allied Media Conference, where people have continued to suggest fantastical tips and tools.

Initially IM asked people to suggest tips thinking about surviving racism through different frames: interpersonal, institutional and structural. Recently, they have been more focused on brainstorming around various black identities. For example, explicitly considering the experiences of undocumented black immigrants they offer a satirical tool around ICE raids: an invisibility cloak. 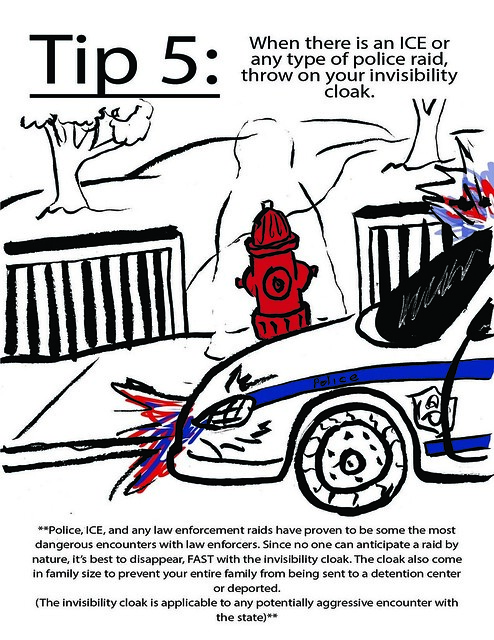 One survival tool they are offering that cuts across many black identities is a Black Body Survival card. Fashioned after a standard 3.5 by 2 inch insurance or medical alert card, it has a space for the card owner’s contact information as well as that of a white co-signer. The white co-signer is to be “notified in [the] case of any situation where the state of the [owner’s] health, well being or danger to others may be in question.” Explaining where the idea for this card came from, DeJean says, “there are some things we do in our lives that are about survival. For example… white people add protection. We’ll say, you white friend, you go catch the cab. You go get that drink at the bar. [Because] their physical appearance gives them more access.” 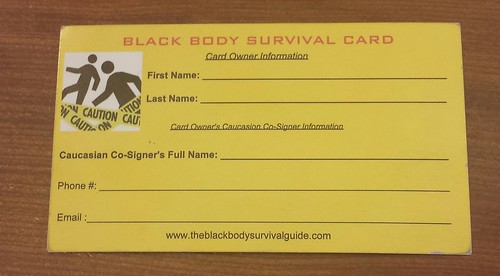 Walking the fine line between the real and the surreal, the guide “uses humor to help black folks grieve, process, and relax,” Marshall says. DeJean goes on to demonstrate. Seated with her hands lifted above her head, her feet flailing in the air and her eyebrows arched high, she chuckles as she recalls one of her favorite tips: “keep your eyes, feet, and eyebrows raised.” The absurdity of her motions is hilarious and you can easily imagine the .gif that could accompany such a tip. But off course, the action also conjures up memories of Mike Brown being shot and killed with his hands raised, screaming don’t shoot. 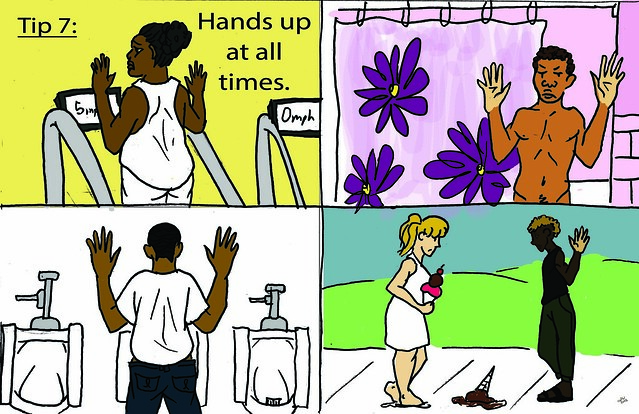 Indeed, in addition to laughter, another common response to IM’s guide is that in this moment, where state violence against black and brown bodies has come into sharper focus, people are honestly looking for a blueprint for survival. “But there is no real book, that book can’t exist. People are longing for guidance. (Asking) where do we go next?” DeJean adds.

One thing is for sure, survival will require being able to be fully human. So in as much as the guide invites readers and users into amusement and laughter, which researchers in psychology have proven can reduce pain and stress, it is an important tool for survival.

Just as IM began their Black Body Survival Guide process by crowdsourcing possible tips and tools, they are hoping to raise the money to complete their production through similar means. They currently have an Indiegogo Campaign to raise $8,000 underway.

0 responses to “Using Humor and Satire as Survival Tools”